Patriots Game Plan: How the Pats Offense Can Get Right Against the Bengals 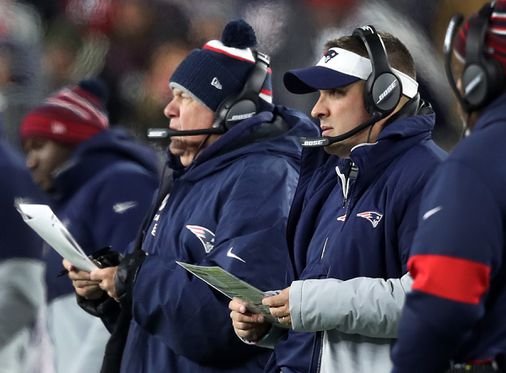 The only relevant Bengals topic heading into Sunday’s game in Cincinnati is the fit they’re throwing over a non-story over videotaping.

Despite what Bill Belichick says, the Bengals stink, and their 1-12 record matches their 30th-ranked operation in DVOA; they are a bad team and have no shot on Sunday.

For the Patriots, this week, and the next three weeks for that matter are about finding offensive consistency that can carry into the postseason.

Over the last six games, the New England offense is only producing 18 points per game and the Patriots rank near the bottom of the league in the major categories over that span.

STATISTICAL ANALYSIS OF THE STRUGGLES

The folks over at Pro Football Focus did a fantastic job of contextualizing what’s going on with the Patriots offense, as their data directly backs up the eye test.

Believe it or not, quarterback Tom Brady is under pressure on just 30.8 percent of his drop-backs, the sixth-best mark in the league, and the Pats OL is a respectable tenth in pass-blocking efficiency. Plus, Brady’s elite 90.1 grade, when kept clean, is tied for sixth-best.

The 42-year-old quarterback is the least of my concerns. He’s playing well, especially when he has a chance, and would be better across the board with an improved supporting cast.

However, when the pressure comes, and it’s coming fast, there are too many shortcomings for Brady to perform well under those conditions.

This season, Brady has faced pressure in two seconds or less 53 times, which is the seventh-most in the NFL, and when he’s pressured, he’s throwing into tight windows nearly half the time because his receivers can’t get open quickly (44.9 percent).

With his receivers struggling to create separation and the immediate breakdowns along the offensive line, Brady’s grade drops from 90.1 when kept clean to 49.1 under pressure (16th).

For example, last week against the Chiefs, Kansas City threw a replacement blitz that fooled left tackle Isaiah Wynn. The edge rusher, Frank Clark, who Wynn thinks is coming, drops into coverage while the corner in the box blitzes. Kendall Fuller gets a free shot at Brady, and the throw takes Edelman to the ground. If Brady makes an accurate pass, that’s a potential touchdown.

We know the problems with the Patriots offense. The questions now are, who is to blame, and how do they fix the issues?

There’s plenty of blame to go around, and it all probably started with the personnel department in the offseason, culminating in the Antonio Brown signing in September.

Brown was a costly mistake, the Pats didn’t do enough to replace Gronk (they haven’t drafted a tight end before round five since 2010, and skill players in the rookie class aren’t producing or seeing the field.

The coaching staff and offensive coordinator Josh McDaniels need to shoulder some of the blame too.

With McDaniels, it’s all about players over plays. He hasn’t integrated first-round pick N’Keal Harry or trade deadline acquisition Mohamed Sanu, and outside of a few examples, the types of opportunities he has given Harry are perplexing.

Harry, who is not known for his route running prowess, runs a poor route against Houston, resulting in an interception, and then sees two snaps versus Kansas City.

Down by the goal line, however, its undrafted rookie Jakobi Meyers as the target on a back-shoulder throw or five-foot-ten Phillip Dorsett on a second-quarter play.

Harry is a six-foot-three contested-catch specialist, but we are going to target the slot receiver and a small speedster on the back shoulders? Just odd.

My other gripe with McDaniels is how he’s handling recent game plans by the opposition; teams are blitzing more without fear of a downfield threat and doubling Julian Edelman.

The Patriots, who are the fifth-best team in creating positive EPA plays off of screens, only ran three screen passes and not a single draw play as the KC defense blitzed Brady 14 times.

And with Edelman, if opposing DC’s are going to double him, keeping him in the middle of the field is a detriment to the offense. If you move him outside, then it gives the offense the advantage between the numbers.

Keeping Edelman in the slot, where he is nearly 70 percent of the time, forces Brady to throw deep and outside the numbers, a low percentage throw for any offense, but especially this one.

Along with integrating the newer receivers and moving Edelman around, the Patriots offense would also benefit from more of their “pony” sets and no-huddle attack.

When the Patriots committed to the power running game in 2018, it was easy to see why the coaching staff went in that direction.

Looking at the roster construction, they had a fantastic offensive line, a Pro Bowl fullback, an All-Pro blocking tight end, and a first-round running back.

When you look at this year’s team, it feels like things need to funnel through Edelman and the deep group they have at running back, which brings us to pony packages.

The “pony” packages are snaps with two running backs on the field together; most of the time, that’s James White and Rex Burkhead.

Unfortunately, groupings with White and Burkhead on the field together have been horrible this year for the Patriots.

McDaniels has created favorable matchups with his backs for years, and although teams are game-planning heavily for White, it’s difficult to get two good coverage players on both backs with three other receivers on the field; someone is getting a linebacker.

Plus, White and Burkhead are interchangeable, and you can move them around the formation and flex them out wide.

Part of the reason the Patriots are so poor out of “pony” sets is that the passes are shorter, and Brady’s average depth of target is only 6.4.

If the Patriots can create matchups on the outside with the unique grouping, they might be able to generate deeper throws.

And if they commit to the grouping, my guess is they’ll improve and find more creative ways to produce better numbers.

Lastly, the Patriots offense should commit to a no-huddle or up-tempo attack.

The Patriots have gone no-huddle in spurts and did it for nearly half the game against Baltimore, but more is better in this case.

The Pats offense is averaging 7.1 yards per pass attempt and has a 51.7 positive EPA rate on no-huddle plays compared to 6.6 yards per attempt and 43.7 plus-EPA rate when they huddle.

Tempo isn’t a cure-all for the Patriots woes on offense, but it can give the offense a much-needed jolt of speed and urgency.

The Patriots offense is lacking speed on the outside, so they can get defenses on their heels by speeding up the game in different ways.

FILM NOTES ON THE BENGALS

1. The Sean McVay Influence in Cincinnati

“Sean was a big influence on me from a culture standpoint, and certainly learned a lot about offensive football when I was underneath him,” Taylor said during Thursday’s conference call.

Belichick explained that some of the core principles of Taylor’s system resemble McVay’s, but that there are a lot of differences too.

In Cincanitt’s loss to the Browns last week, the Bengals’ first play from scrimmage, a 21-yard completion to Tyler Boyd, was a McVay staple.

On the play, the personnel grouping (11) and the formation are so McVay. The receivers to Dalton’s right are in tight to the formation in a bunch set. On the backside, there’s one lone receiver outside the numbers. The Bengals then ran a wide zone play-action fake with the running back occupying the flat defender and the backside receiver clearing out the sideline. Boyd runs a crosser into the bubble of space and beats the linebacker across the field.

The Bengals have some different wrinkles, but the formations are straight out of the LA playbook, and they’re a heavy wide zone rushing attack.

Cincinnati runs everything through running back Joe Mixon offensively, and for a good reason. He’s a gifted ball carrier and can catch the ball too. Taylor will flex Mixon out wide to target him downfield in the passing game; the Oklahoma product can do it all.

We could see a similar game plan to Super Bowl 53 with six defenders across the line of scrimmage and some quarters coverage on early downs in the secondary to take away crossers and shot plays.

The Bengals defense is currently 30th in total DVOA and isn’t particularly good against the pass (30th) or the run (28th). However, they have an attacking defensive line.

“They’ve really got a disruptive front four, sometimes it’s five if they’re in their base defense with [Sam] Hubbard and [Carlos] Dunlap on the edge, two big, long guys.”

Seven-time Pro Bowler Geno Atkins isn’t at the peak of his powers, but he’s still got 45 quarterbacks pressures and five sacks, and Dunlap is a strong force on the edge.

If the Bengals have anything going for them defensively, it’s their pass rush.

The best part of this Bengals team is in the kicking game, where they are the top-ranked special teams unit in the entire NFL, according to DVOA. Both coverage units, kickoff, and punt, are near the top of the league, and kickoff return man Brandon Wilson leads the NFL in return average (31.3).

“Special teams, I think Darrin [Simmons] does a great job with that unit. As usual, they’re right at the top of the league in both punt and kickoff coverage, kickoff returns. They’re really a solid group, well-coached, fundamentally very good and make it tough on you there,” Belichick said.

The Patriots also have one of the league’s top special teams units, so we’ll see two of the best go head-to-head on Sunday.