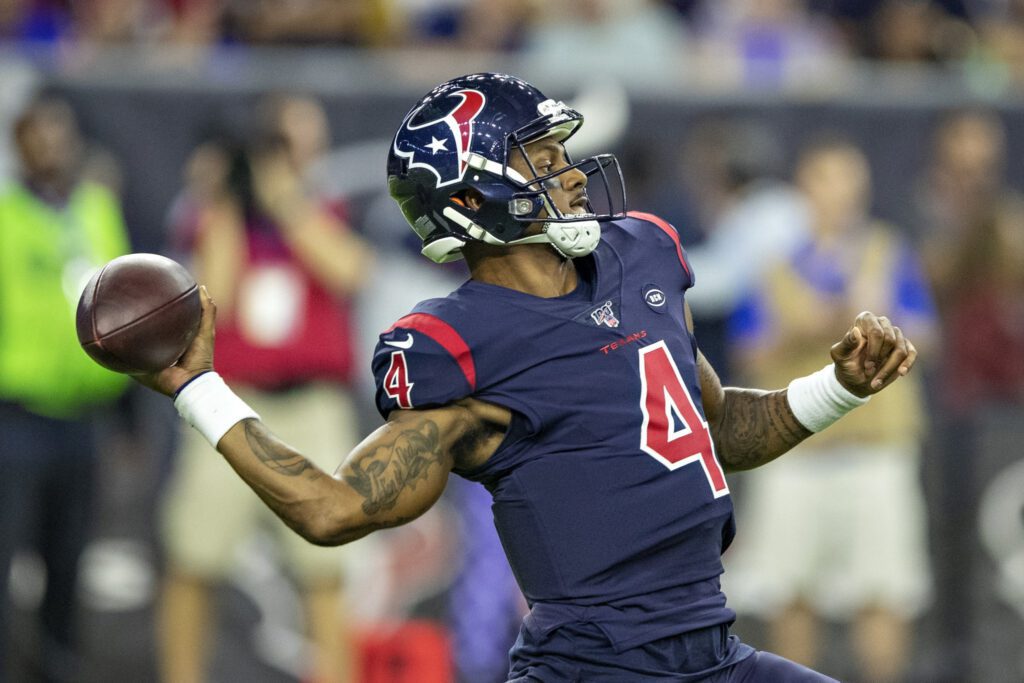 FOXBORO — For the fourth consecutive game, the Patriots defense will face a quarterback in the top seven of ESPN’s total QBR efficiency metric and another explosive offense.

Watson presents another dual-threat quarterback that’s more like Prescott than what the Patriots faced with Jackson. The Texans offense has some zone-read and RPO elements, but it’s not a run-first attack with the unique schemes that the Baltimore offense brings to the table.

Watson’s legs come into play when he scrambles and either throws downfield on broken plays or runs for first downs. In terms of designed runs, Watson only has 14 carries.

The key to beating Watson and limiting an explosive Houston passing attack, Watson is third in completions of 20 or more yards, is playing man coverage on Watson’s receivers.

This season, teams are playing more zone coverage against Watson and the Texans offense, which makes sense since they can keep an eye on the QB and keep the receivers in front of them.

However, Watson is shredding zone coverage averaging over nine yards per pass attempt while completing 70 percent of his passes. Against man, Watson’s numbers are pedestrian.

In particular, the Houston quarterback, in a limited sample size, has struggled to figure out cover-2 man coverage or two-man as it’s often called in football. And the Patriots are playing more two-man this season than in year’s past.

This year, the Pats are playing cover-2 zone or man on 21 percent of their defensive passing plays. In 2018, they only played those two coverages on a combined nine percent of snaps.

Pats head coach Bill Belichick made light of percentages saying, “I think you can find it in any game. You can certainly find a lot of it in the Eagles game. I don’t think you’ll see a lot of it in the Baltimore game just because of the nature of their offense. But yeah, I think if you go back, that’s one of the things we do. The percentages might vary a little bit. Some of it’s a reflection of what the offense is in, that might have an effect on it too, but I think you’ll see it in every game.”

Echoing his head coach, Pats safety Duron Harmon explained to CLNS Media that the uptick in two-deep coverages is based on the opponent more than a change in philosophy.

“It’s based on the offensive personnel, what they’re trying to do, and how we can neutralize their strengths,” Harmon said. “If cover-2 is going to be great for us that week, we are going to play more cover-2. But if it’s not, getting the extra guy in the box is going to be helpful, that’s what we are going to do.”

The Patriots used more two-deep coverages in games against the Browns, Eagles, and Cowboys because of their playmakers on the perimeter, and the Texans present similar issues.

With All-Pro receiver DeAndre Hopkins and speedster Will Fuller, Houston is a big play over the top waiting to happen, and Watson’s ranking in deep completions noted earlier reflects that.

Here’s an example of what Fuller can do in Houston’s win over the Colts last week. The Indy defense plays single-high coverage with the safety shaded towards Hopkins at the bottom of the screen. The coverage leaves Fuller one-on-one on the outside, and Watson hits the shot.

The Patriots can play two-deep coverages that provide safety help on all of Houston’s explosive playmakers but still stick to their bread-and-butter of man coverage, which they lead the league.

In Week 6 against the Chiefs, Watson went 0-for-4 with an interception against two-man. On the play above, Watson wants to take a shot to Hopkins on the left sideline, but the Chiefs corner plays aggressive man coverage and the safety shades over the top of Hopkins’ route. Watson has to hold the ball and throws incomplete to his running back out of the backfield.

Against the Cowboys, nine of Dak Prescott’s 33 pass attempts were against variations of cover-2. Here, the Pats are in two-man on third down. At the bottom of the screen, JC Jackson is high-lowing Michael Gallup with Harmon. At the top of the screen, Devin McCourty is protecting over the top against Randall Cobb and Tavon Austin. The Pats have good coverage, and Dak’s throw takes Austin out of bounds.

As Harmon said, cover-2 takes a defender out of the box to put another safety deep. But that’ll likely be a tradeoff the Patriots will take to limit explosive plays.

Along with playing two-deep coverage, the Patriots in the past have implemented a coverage scheme that they call “one double” on the prolific Hopkins.

Here are the Patriots playing one double against Tyreek Hill in the AFC Championship Game. The Pats call one of their favorite schemes: “dime-odd magic zero double.” Dime odd refers to the front, magic tells the stunt rushers how to read the protection, and zero double is the coverage. Jonathan Jones and Devin McCourty double Hill at the top of the screen, which gives the rush time to get home, and Kyle Van Noy sacks Mahomes.

In theory, the Pats could call “one double #10,” which is, of course, a double on Hopkins, while playing two-deep with a four-man rush. But we’ll probably see some zero double as well.

With Watson, the key, along with keeping him in the pocket, is forcing him to beat the defense with death by a thousand paper cuts rather than chunk plays through the air.

Watson’s adjusted completion percentage on passes of 20 or more yards leads all quarterbacks with 25-plus attempts. But on throws of under 20 yards, he’s in the middle of the pack at 14th.

The Texans quarterback is an electric athlete. Gap discipline, and if they play man, having a spy and rush plan will also be critical along with stopping Watson through the air.

But at the end of the day, Watson is grading out well as a passer from the pocket too, ranking tenth among 32 qualified quarterbacks in Pro Football Focus grade (79.7).

Believe it or not, Watson’s grade on throws inside the pocket is higher than outside (65.0).

If the Patriots defense wants to send another message to the rest of the league on Sunday night, they’ll have to shut down Watson’s arm.

OTHER FILM NOTES ON THE TEXANS

1. Houston’s Defense Is Vulnerable, Especially Through the Air

Scouting the Houston defense, it’s challenging to find things that scare you with their current personnel. Five-time Pro Bowler J.J. Watt is out for the season, Jadeveon Clowney is in Seattle, and their secondary is in complete shambles. Houston’s highest-graded regular on defense is linebacker Benardrick McKinney, who is an above-average starter in the PFF system. Overall, their defense is 26th in total DVOA and 26th against the pass. With a shorthanded secondary, defensive coordinator Romeo Crennel is playing mostly zone coverage, both post and split-safety, depending on the situation. Crennel is a game plan coach, and he’ll likely want to play more man against the Pats, but he might not have the horses. The Patriots and Tom Brady should be able to move the ball against this defense.

If there’s a strength of the Houston defense, it’s in the front seven, and they’re a more respectable run defense at 13th in total DVOA. Along with McKinney, nose tackle DJ Reader is a physical force in the middle.

The Texans play two base fronts that are similar to what we see in New England. They’ll play out of a two-man line or EX front and a more traditional 3-3 or 3-4 defense. Reader is usually in one of the A-gaps while McKinney is the starting MIKE linebacker.

Although it’s a stout front with physical defenders, the Colts averaged 4.5 yards per rush and running back Jonathan Williams ran for 104 yards and a touchdown. Indy ran the ball effectively by spreading out the big Texans defense, forcing them to move side to side. On the play above, the Colts run a split-zone scheme with the offensive line blocking left while the tight end comes across the formation. The Colts pin down the Texans defense, and Williams gains 12 yards.

To keep the running game rolling, the Patriots should make those big guys run sideline-to-sideline with their running backs.

In the offseason, the Texans overhauled one of the worst offensive lines in football. They traded the house for left tackle Laremy Tunsil, who has played well, and are starting rookies Tytus Howard (23rd overall) and Max Scharping (55th overall). Despite the moves, the Texans OL ranks 23rd out of 32 in run-blocking grade and a more respectable but still average 11th in pass-blocking efficiency. Watson’s pressure rate of 37.9 is the seventh-worst mark in the league, but some of that is on the quarterback. Watson is responsible for 28 quarterback pressures, which is the second-most in the league. Although the Pats need to be disciplined in their gaps due to Watson’s mobility, they have the upper hand against the Texans offensive line.

Houston special teams coordinator Brad Seely spent ten seasons in charge of the Pats special teams, adding another layer of New England ties within the Texans organization. Going into the week, the Texans are eighth in special teams DVOA, setting up a strength-on-strength battle with the best coverage team in football in the Patriots.