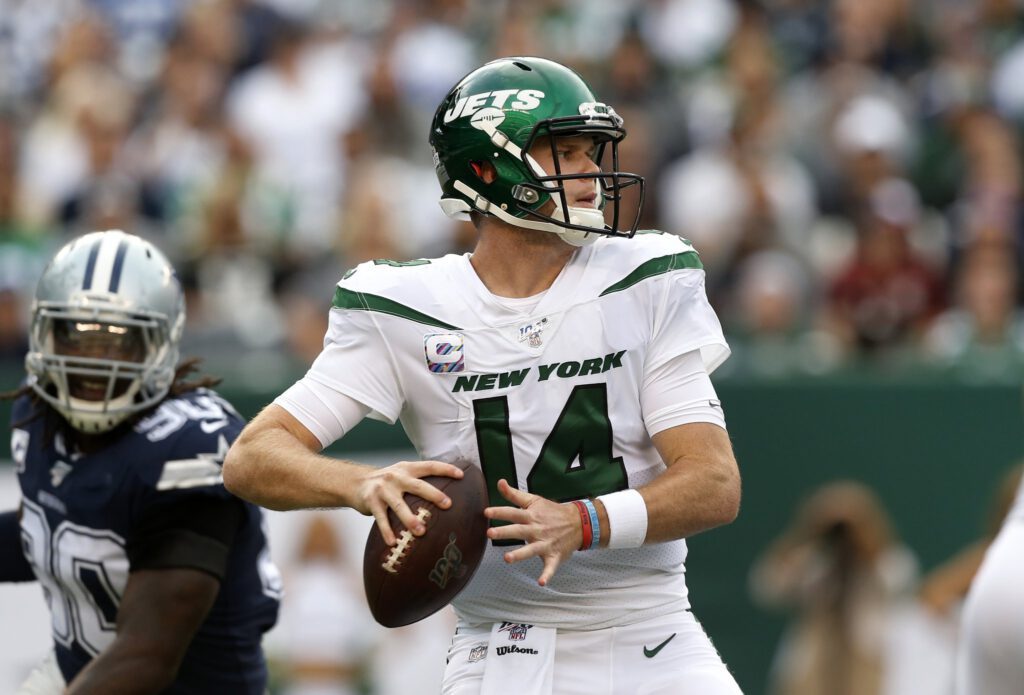 FOXBORO — the New York Jets have their quarterback, and that’s enough to give Monday night’s matchup with the Patriots some juice.

Darnold returned from his bought with mono last week and led Gang Green to an upset win over the Dallas Cowboys in the Meadowlands.

Darnold is better than Luke Falk, the Jets quarterback the Pats faced in Week 3, in many ways. But Darnold’s ability to avoid and throw under pressure makes the Jets offense viable.

In his two starts, Darnold’s 78.9 grade and 91.4 passer rating under pressure both are fourth-best among qualified quarterbacks and are a dramatic improvement from Falk. Falk also took a sack on 37 percent of his drop-backs while Darnold is only sacked on 21.4 percent.

The second-year Jets quarterback has the savviness inside the pocket to make subtle moves that give him a chance behind a bad New York offensive line. The Jets OL ranks 30th in pass-blocking efficiency, but Darnold makes life easier. He’ll seek out the soft spots and can make off-platform throws with defenders around him.

Darnold also understands how to keep himself protected in the pocket. On the play above, Darnold stares down the right side of the field on his drop to move the safety. Once he gets to the top of his drop, he senses Leighton Vander Esch rushing off the edge, so he hitches up into the pocket eliminating Vander Esch’s angle to the quarterback and running him into blockers. Darnold comes back left and makes an accurate back-shoulder throw.

For the Jets offense, I believe that Darnold could make competitive downfield throws against the Patriots secondary. My bigger concern is the receivers, who are overmatched by New England’s group of corners. If they can separate, Darnold can make the throws.

The Jets are much healthier on defense this time around as well with linebacker C.J. Mosley and first-round pick Quinnen Williams back in the lineup. But they lack outside cornerbacks and premier pass rushers.

Williams’s scheme is unique, with heavy rotations on the backend and aggressive blitz packages that you don’t see every week.

Three-parter from Gregg Williams leads to the Odell TD on Monday night:

1. No defender over Odell in the slot

2. Over front asks the LB to the three receiver side to play the A gap in the run game and drop underneath Odell's route

3. Lines FS Marcus Maye up on the moon #Jets pic.twitter.com/V3BMZKChdx

Sometimes, it gets Williams into trouble when he brings the heat and doesn’t correctly account for holes on the backend, but it can be effective.

After the win in September, Patriots head coach Bill Belichick pointed out how the Jets used several variations of cover-2 that slowed Brady and company down a bit after a quick start.

“Like yesterday, the Jets played a lot of cover two, but they had two or three different ways of the way they played it and it kind of looks the same, but it’s not the same, and it really can affect the receivers rules and his adjustments because it just, it looks different,” he said.

Along with traditional cover-2, the Jets will run an inverted coverage.

Here, the Jets show a single-high structure before the snap. At the snap, the centerfielder rotates down and the slot defender drops to take half the field. For the Pats, that’ll present a post-snap read for the receivers to run cover-2 beating routes rather than single-high beaters.

On this play, the safeties take half the field in a two-high look, but the defensive back over the slot runs with the post route. Post routes are difficult to account for in cover-2 with the safeties split, but this is a workaround.

In the first matchup, the Jets disguises gave Brady and his receivers some problems. This time, the slot defender drops, and it declares as cover-2, so Brady looks to Ryan Izzo on a hitch route where the rotation comes from, but the edge defender drops underneath the route from the line of scrimmage. By the time Brady gets to the other side of the field, the coverage rotates into the passing lanes. Brady was called for intentional grounding on the play.

The Jets also play a lot of man-free coverage, especially against Dallas’s depleted receiving corps, which is man-to-man across the board with the free safety roaming.

The New York defense will bust coverages here or there, partially due to poor design, but they have the pieces to keep this game close if they can execute consistently, which is a big if.

OTHER NOTES ON THE JETS

Over the last two seasons, Gilmore has erased Anderson from the game, shadowing him on the majority of passing plays.

In his last three games against the Patriots, Anderson has three catches on 14 targets with Gilmore in coverage. Gilmore told me that his strategy is to bully the slender Anderson. The Jets wideout is a burner, but it’s tough to use that speed when you can’t get off the line of scrimmage. It’s probably a safe bet that Gilmore’s dominance over Anderson will continue.

– How will the Patriots defend Le’ Veon Bell?

Last time out, the Patriots held Bell to 2.9 yards per touch with excellent execution of the game plan. New England’s strategy against Bell and the Jets running game was for the defensive tackles to eat blockers while the linebacker swarm Bell, and wait him out. Bell’s production is down in the passing game, but the Pats still accounted for him with either Jamie Collins or Patrick Chung in man coverage. As Belichick says, it takes the whole defense to stop a player like Bell. Expect a swarming approach again on Monday night.

The Patriots had two tight ends on the field for 29 snaps over the last two weeks after only 11 times in the first four games. It just so happens that the Jets defense struggles to defend two-tight end sets.

Cowboys quarterback Dak Prescott completed seven-of-nine passes and averaged 7.4 yards per attempt last week (6.8 on all other throws). On the season, opposing quarterbacks completed nearly 72 percent of their passes and average 8.3 yards per attempt. Plus, they averaged 0.29 expected points added per drop-back with two tight ends compared to 0.05 EPA in all other personnel groupings. With Ben Watson back in the mix, we’ll see if the Patriots play the numbers and try to have similar success.

The Jets are still waiting on their Williams pairing on the defensive line to live up to their draft statuses. Although, Leonard had a good game against Dallas and Quinnen is only a rookie. In the secondary, Jamal Adams is an absolute force, and you look forward to seeing him fly around the field every time these two teams play. Adams is currently fourth in overall grade among safeties, and his teammate Marcus Maye ranks 12th. Maye is more of a deep zone defender while Adams can do it all but is at his best in the box.

Adams is another linebacker against the run. Here, he comes into the picture late as the tight end motions into the formation. Adams sees the open gap and shoots into the backfield to make the play behind the line of scrimmage. He’s an excellent player.

Thomas called the Patriots shipping him off to the Jets “insulting” and “disrespectful” in a story in the New York Daily News. He doesn’t seem to like the Pats very much right now. Belichick sounded remorseful speaking on Thomas at his Thursday press conference. Paraphrasing, Belichick said the circumstances changed, and therefore, his original assures to Thomas changed. The changes were the emergence of undrafted rookies Jakobi Meyers and Gunner Olszewski as well as the Antonio Brown signing. Brown is no longer here, and the Pats are banged up at receiver, but I don’t blame the team for going this route.

The Patriots are essentially paying Meyers, Olszewski, and first-round pick N’Keal Harry the same number against the cap combined that they’d owe to Thomas this season. And the production, especially once Harry returns, figures to be about the same if not better. They went younger, and emphasized development over a veteran presence, at least at wide receiver. At most other positions, the Patriots continue to hold on to their veteran depth. In the second half last Thursday night, the three receivers could’ve been Julian Edelman, Demaryius Thomas, and one of Meyers or Olszewski. Does that group have more upside than playing the two rookies? Probably. But that took injuries to Dorsett and Gordon to get to that point. Other than extenuating circumstances, it’s hard to envision when Thomas would’ve played. It’s good to see them try to develop some young players at the spot.