Patriots Game Plan: Why the Pats, Mac Jones Should Attack the Saints With Quick Passing 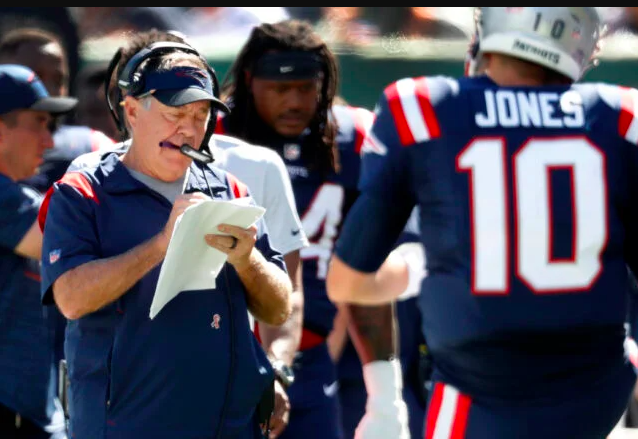 The last time the Patriots played the Saints, Tom Brady led a victory over Drew Brees in the Superdome back in 2017.

New England and New Orleans only play once every four years, and the last contest was a battle of Hall of Fame QBs that are no longer with their old teams.

“Obviously, a team we’re not very familiar with personnel-wise or scheme-wise. We haven’t seen these guys in quite a while, so got a lot of work to do this week,” Patriots head coach Bill Belichick said on Wednesday.

Without significant institutional knowledge, this isn’t a game where you try to cram everything about the opponent into a few days of prep.

Instead, two game-plan teams will likely focus on exposing weaknesses that presented themselves in the first two weeks of the season.

In their loss to the Panthers last week, Allen blitzed Carolina quarterback Sam Darnold 15 times, five of which were on third down.

Allen will stack the line of scrimmage and rotate in and out of blitzes. Sometimes they’ll bring the house, then they’ll drop-off, and other times they’ll drop the rushers you expect to blitz and bring pressure from a different area of the defense.

As a result, New England has a 29.6 PFF pass-blocking grade against stunts, blitzes, and other schemed pressures in the first two games. Last week, the Jets’ pressure percentage climbed to 55.6% on third down.

Furthermore, New Orleans’s run defense only allows 2.9 yards per rush on under-center carries and was a top-five unit in each of the last three seasons.

In other words, handing the ball off to Damien Harris on early-downs and unlocking Allen’s blitz package on third down is a recipe for a long day.

The Pats ought to take a page out of Carolina’s game plan by spreading the field and attacking with a quick-passing game from the gun.

On 25 pass attempts from the shotgun, Darnold completed 20 passes for 9.1 yards per attempt on short throws that traveled an average of just 5.5 yards in the air.

By spreading out the defense, Carolina gave Darnold a clear picture of the defensive structure, making it easier to hunt matchups and see pressure. When you align in condensed formations, the defense can pack the box and disguise their intentions on blitzes.

Here, the Panthers get wide receiver Robby Anderson isolated in the slot on Saints DB P.J. Williams. Carolina runs their version of New England’s branch/option route, where they clear out the sideline with an outside vertical route for Anderson to go to work. Anderson will then read the defenders’ leverage and break opposite, so when Williams takes his inside positioning, Anderson breaks out, and Darnold hits him for a 16-yard catch-and-run (Williams, a safety, was playing slot CB due to an injury to C.J. Gardner-Johnson).

In this play, Carolina spreads the Saints out again. This time, it gets running back Christian McCaffrey with open space in the middle of the field on linebacker Zack Baun, and you can see how that matchup worked out for New Orleans (hello, James White).

This time, the Saints matched Carolina’s 12-personnel package with their base defense, which presented matchups for the Panthers’ tight ends on the Saints’ linebackers over the middle (paging Hunter Henry and Jonnu Smith).

The Saints secondary is dealing with injuries to top corner Marshon Lattimore (thumb), starting slot corner C.J. Gardner-Johnson (knee), and DB P.J. Williams (back). They’re not an aggressive first and second down pass defense, their run defense is elite, and the secondary is banged up.

One more stat: Carolina threw the football 34 times on first and second down against the Saints in Week 2, averaging 0.20 EPA per play with a 53% success rate (30% success rate on 27 rush attempts).

For rookie quarterback Mac Jones, the weaknesses in New Orleans’s pass defense feed directly into his current strengths as a passer. Mac doesn’t need to throw deep but should throw often.

WHEN THE SAINTS HAVE THE BALL

As the Patriots’ offense sizes up the weaknesses in the Saints’ defense, New Orleans head coach Sean Payton is doing the same thing on the other side of the ball.

Belichick spoke in detail this week about the Saints’ wide variety of formations and personnel groupings, with a massive playbook at Payton’s disposal, adding, “they emphasize doing whatever the defense is not very good at. If you’re not very good at something, you better expect to see a lot of it.”

Like how the short passing game feeds into Mac Jones’s strength as a passer, the Patriots’ issues stopping the run line up with the Saints’ strengths on offense.

Since the start of the 2020 season, the Pats’ run defense ranks 27th in the NFL against outside zone schemes, which the Jets featured in their 152-yard performance in Week 2 (4.9 average).

What is New Orleans’s most used run-blocking scheme? You guessed it, outside zone and a run-heavy game-plan will allow top weapon Alvin Kamara to touch the ball as often as possible.

New England’s issues against outside zone blocking against the Jets were a little different than what we saw in 2020. Last season, setting the edge was a significant problem for the Patriots.

In New York, there were a few instances where the edge force could’ve been better. But the main problem was that the interior defensive linemen were moving east-west too often.

In this play, Matt Judon, Adrian Phillips, and Lawrence Guy build a wall to set the edge of the defense and force the ball carrier back inside. However, the play is lost when the center-right guard combination block pushes nose tackle Davon Godchaux downfield. Godchaux gets reached, turned, and moved backward, which opens the cutback lane for Michael Carter.

Here’s a split-zone rep by the Jets where the tight end comes across the formation to change the point of attack. Again, the strong side does its job to wall off the corner. But rookie Christian Barmore allows himself to get run downfield by the left tackle, and it’s another positive run.

The key to stopping outside zone blocking is to get vertical penetration up the field. The offense wants the defense to flow side-to-side because that sets up cutback lanes for big gains.

In Super Bowl 53, the Patriots had the perfect game plan and execution against the Rams’ outside zone-heavy run game, with Belichick urging the D-Line to “get vertical” upfield.

Carolina’s defensive front held the Saints to 2.8 yards per rush by resetting the line of scrimmage with a similar game plan to New England’s Super Bowl-winning formula.

Watch Panthers NT Bravvion Roy on Saints center Cesar Ruiz. Roy knocks Ruiz backward and gets downhill at the snap. Compare that to how Godchaux played it. Big difference.

The Saints will want to get Kamara and the running game going to avoid long down and distances against an effective Belichick pressure package. And it could be even easier for New Orleans to run the ball if Pats linebacker Matt Judon sits this one out (knee).

Saints QB Jameis Winston’s has a 41.8 PFF grade and a 47.5 passer rating while under pressure this season. That grade plummets even more for Winston against the blitz (28.5).

If the Patriots can stop the run and force the Saints into a drop-back passing game, they’ll find success against Winston, who is still turnover-prone and craters while under pressure.

The biggest mismatch in this game is a potential matchup between right tackles Justin Herron and Yasir Durant versus Saints multi-time Pro Bowler Cam Jordan. Jordan isn’t at the peak of his powers anymore in his 11th season. But he’s still capable enough to feast on a pair of backup tackles. Jordan tends to line up over the right side of the offensive line, and if starter Trent Brown (calf) can’t play, the Pats will need to send help in that direction.

It’ll be interesting to see how the Patriots defend Kamara in the passing game. He’s by far the Saints’ most dangerous receiver, especially with Michael Thomas on the PUP list, so it wouldn’t surprise me if we see a cornerback on Kamara when he’s flexed out. Still, it’ll be critical to get either Phillips or Dugger on him in coverage when he’s working out of the backfield. The Pats can’t let the Saints get Ja’Whaun Bentley or Dont’a Hightower isolated on Kamara, but you know Sean Payton will try to get that matchup as often as possible on Sunday. It’s a chess match between Belichick and Payton to keep a DB on Kamara. Some big nickel for the Pats with Phillips and Dugger both in the box?

Starting center Erik McCoy (calf) didn’t play in last week’s game against the Panthers and missed the first two practices of the week. Most likely, it’ll be Ruiz at center once again. As we broke down above, the center/NT matchup in an outside zone scheme is critical. Godchaux has to be more aggressive and reset the line of scrimmage upfield this week. If the Pats keep giving Kamara those kinds of cutback lanes, it’ll be trouble.

Saints star cornerback Marshon Lattimore had surgery on a broken thumb from an injury he suffered battling with Packers wideout Davante Adams in the opener. The Saints are hopeful that Lattimore will play this week, and although he had a down year in 2020, we all know he’s capable of shutting down the best receivers in the game. If he’s out again, Panthers wideout D.J. Moore found success against Lattimore’s replacement, rookie Paulson Adebo. Due to Adebo’s struggles, New Orleans could roll with veterans Bradley Roby and Desmond Trufant on the outside if Lattimore is out.

White told CLNS Media that he is studying how the Saints defended Panthers running back Christian McCaffrey last week since the two are similar players in the passing game. McCaffrey was a huge factor, catching five passes, all for first downs, for 65 yards. Baun, in particular, struggled against McCaffrey in coverage (3 catches, 49 yards). Expect the Pats to work that matchup on Sunday.