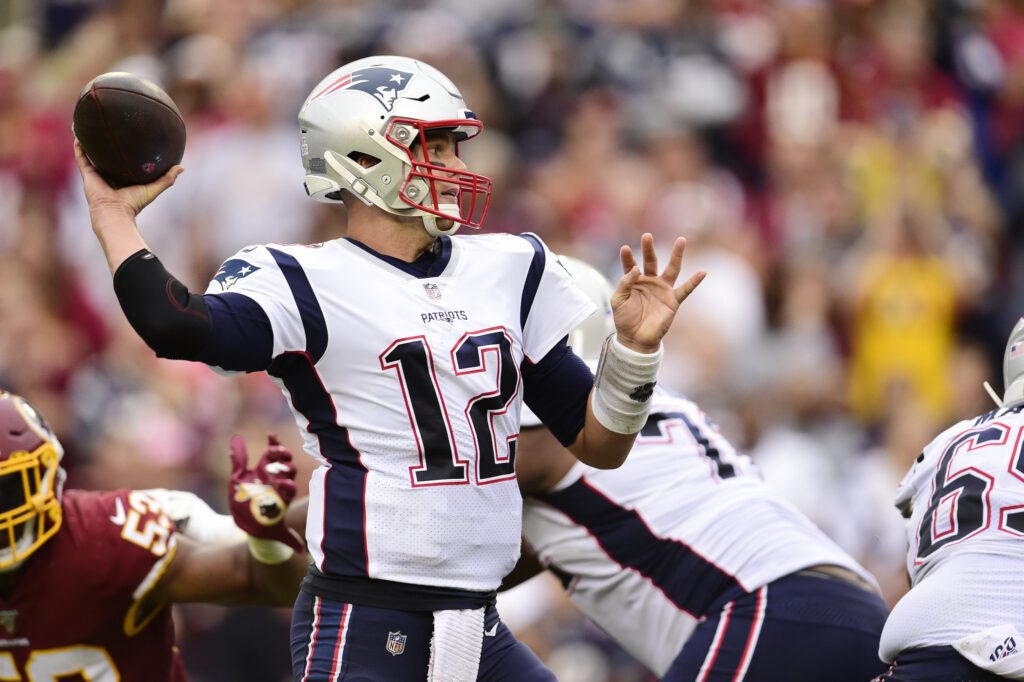 The Patriots’ string of weak opponents to start the season is getting tedious with the shorthanded New York Giants (2-3) as the latest two-touchdown dogs to play New England.

I’m not diminishing what the undefeated Patriots are doing in the first half of the season, but it would be nice to break down an actual game rather than these cupcakes.

Nevertheless, the Giants do have an intriguing rookie quarterback in Daniel Jones that, despite his depleted arsenal of weapons and draft analysis, gives this game an interesting twist.

The New York defense also ranks 23rd in Football Outsiders’ DVOA efficiency metric and 29th against the pass, which doesn’t bode well for their odds against Tom Brady and company.

For the Patriots, I’m curious to see if they’ll continue some of the positive trends offensively from the win over the Redskins and if they can clean up a few things in the secondary.

Admittedly, we are nitpicking with the defense, and they still played good football in Washington. However, there were some breakdowns, and a better quarterback might’ve taken advantage.

The Redskins offense ran four-wide receiver sets that Belichick admitted post-game took the Pats by surprise. They knew they’d run some 10 personnel but didn’t expect that much of it.

In the first half, the Patriots were adjusting on the fly to the spread looks from Jay Gruden.

Washington goes trips receivers to McCoy’s left. The Patriots drop into a cover-2 zone structure, and the Redskins run two vertical routes, a seam and a fade from the slot receivers. Pats safety Terrence Brooks needs to stay over the top of the inside vertical route, which stresses the coverage in the deep part of the field. The Patriots pass off the underneath in-cut. However, neither JC Jackson nor Jason McCourty locks onto the vertical route. Redskins wide receiver Paul Richardson is behind the defense, but McCoy either doesn’t seem him or is too afraid to pull the trigger and checks it down.

The Patriots made some adjustments to their zone coverages covering up the vertical routes, but there were also a few breakdowns in man coverage.

On this play, the Redskins get two receivers behind man-free coverage. Man-free means that the five eligible receivers are covered man-to-man with the free safety roaming, usually in centerfield. Gilmore loses to Terry McLaurin at the line of scrimmage, and the Redskins rookie separates on a corner route. McCoy stares down McLaurin and is late to trigger, which gives Harmon a chance to break up the pass. Gilmore was flagged for illegal use of hands, as well.

“The Redskins used a lot of 10 personnel, lot of four receivers, we knew they were down a tight end. We anticipated some of that. Not as much as they did,” Belichick said. “It was a good job by the secondary adjusting to those formations. We made a couple calls in the second quarter and halftime to handle it better.”

The greatest coach ever thought the defense adjusted well, so we’ll take his word, but he also demands perfection from the coaches and players. Against a better offense, those coverage breakdowns will get exposed.

Offensively, my film review on Tuesday documented the tendencies that the Patriots broke by throwing the football out of 12 personnel and with running back Sony Michel on the field.

The Pats were highly successful in both respects, averaging 8.5 yards per attempt on 19 pass attempts by Brady with Michel in the game and over 12 yards per play out of 12 personnel.

Hopefully, the new wrinkles by offensive coordinator Josh McDaniels weren’t a flash in the pan and continue on Thursday night.

I asked Belichick about the two tight end sets after the game, and he said, “We always try to take the matchup and the game plan we feel will be the best game plan for the game.”

Take that as you will, but my read on it was that the Patriots felt it was the best way to beat the Redskins defense, which means it might not be a regular part of the offense.

With Michel, I could see that trend continuing this week, but the bigger question is will he still play in passing situations when Rex Burkhead returns from injury?

The Patriots went with Burkhead and Brandon Bolden in the passing game against the Jets in Week 3 when James White missed the game due to the birth of his child. So, something might’ve changed with how they view Michel’s usage since then.

We’ll see how the offense operates against a Giants defense that’s extremely vulnerable.

With the Patriots side of things covered, let’s get to some thoughts on the New York Giants:

We are only three starts into Daniel Jones’s career, and I’m already eating my words, like many draftniks.

At Duke, I saw a quarterback that didn’t throw accurately beyond ten yards and lost his mechanics in the pocket under pressure. He was good in the quick game and would stand in against pressure, but I didn’t see the arm talent or nuance of a first-round pick, let alone in the top ten.

In his first three starts, Jones is reading coverages and making accurate downfield throws at a higher rate than most expected.

Here, Jones correctly reads the lean of the hook defender dropping into zone coverage at the bottom of the screen. Jones reads a two-receiver combination with the tight end running a hitch and the outside receiver running a dig. The linebacker leans to the hitch route, and Jones throws with anticipation to Sterling Shepard for a completion.

Jones’s first start against the Tampa Bay Buccaneers was impressive for a young quarterback.

The Giants set this bomb up all game with Jones throwing crossing patterns in front of the free safety a few times. Once the Bucs secondary saw him take those routes, the centerfielder started to jump the crossers. Jones sees the post safety step up to defend the crosser and knows he has the post open with the middle of the field vacated and makes a 40-yard off-balance throw. He wasn’t hitting those throws in college.

There’s also a running element with Jones at quarterback that didn’t exist with Eli Manning. Jones ran a 4.81 40-yard dash at the NFL combine in February, which puts him in the 52nd percentile among quarterbacks. He isn’t a game-changer when he scrambles, but they’ll have to be aware that he can run. The Giants only attempted one RPO in his first three starts, but Jones did score a touchdown on a zone-read play shown above.

Although Jones is better than expected, the Patriots will likely turn up the heat and take advantage of his struggles against pressure.

He has made some small improvements to his footwork in the pocket, but Jones is still sloppy when there’s pressure in his face. On the play above, he gets skittish when he feels the pocket collapsing, retreats, and throws the ball away instead of calmly hitting the open underneath crosser to his left.

Expect the New England defense to come after Jones and spin the wheel on him in the secondary to create confusion. Their formula against young QBs is working pretty well.

Other Film Notes on the Giants

– One advantage the Patriots have on a short week is that Pat Shurmur’s west coast system is similar to what they just faced against the Redskins.

“Yeah, definitely. There are some similar concepts,” Belichick said when I asked him about carryover from Sunday. “But there are a lot of differences. Certainly, the players are a lot different. So, even though it’s some of the same plays, that changes things.”

The Pats defense will need to prepare for new skill players, but at least they aren’t learning an entirely new scheme in a short week.

– With most of their skill players sidelined by injuries, Jones’s only viable option will be wide receiver Golden Tate. Rookie Darius Slayton can create explosive plays, but Tate is the only consistent playmaker with Saquon Barkley, Sterling Shepard, and Evan Engram likely out. Pats cornerback Jonathan Jones seems like a logical option to cover Tate as Jones plays in the slot and is an excellent open-field tackler. Tate is one of the best YAC receivers in the NFL.

– Against the Giants defense, the Vikings put up 490 yards of offense and 28 points. Minnesota really exposed the New York pass defense with play-action. There were wide-open receivers all day long when the Vikings used play-action, expect the Patriots to take notice.

– Along with play-action, the Giants played several soft zone coverages that left receivers open underneath. Cousins took what the defense gave him, and the Vikings receivers were able to create yards after the catch. The Giants didn’t seem to be interested in playing aggressively in coverage, allowing Cousins to average over ten yards per attempt on passes that traveled fewer than ten air yards.

– The Giants have another talented rookie in nose tackle Dexter Lawrence, who is already one of the most powerful players in the NFL. Lawrence was one of my draft favorites, a mountain of a man with terrific play strength and a high football IQ. Plus, he has the kind of character that you want to build your team around. Lawrence is currently the only healthy player on either side of the ball for New York that has a PFF grade of over 80 through five games (83.0).

– New York has Lawrence (340 pounds), Dalvin Tomlinson (320 pounds), and B.J. Hill (310 pounds) as stout run defenders on the interior. So, the Vikings got their running game going with outside zone schemes that ran away from those immovable objects in the middle. Outside zone forces those big dudes to move horizontally down the line of scrimmage, and Minnesota averaged 5.6 yards per rush on zone runs in Week 5, according to Sports Info Solutions.