Patriots Gameplan: Aaron Rodgers is a Mere Mortal Under Pressure 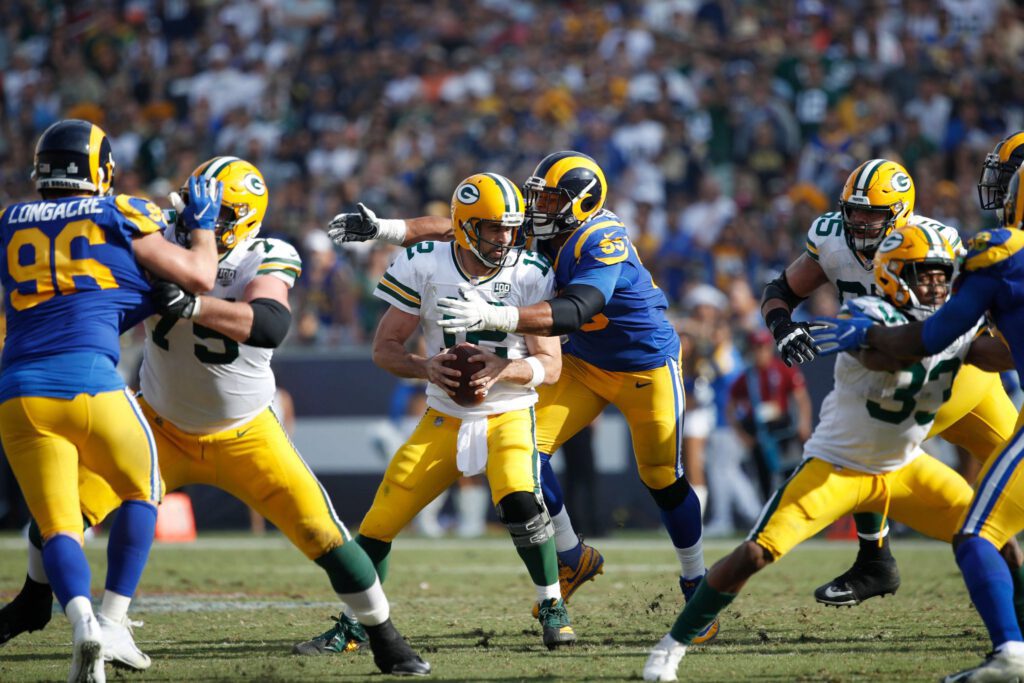 FOXBOROUGH — There aren’t very many matchups where the opposing quarterback is in the same universe as Patriots quarterback Tom Brady, but when Aaron Rodgers and the Green Bay Packers come to town that’s the case.

Rodgers may not be the greatest quarterback we’ve ever seen, that designation belongs to Brady, but he’s undoubtedly among the most talented in the history of the game.

“He does everything well,” said Patriots head coach Bill Belichick. “He reads coverages well, very accurate throwing the ball. He’s got a great touch down the field, short, intermediate…very mobile in the pocket, extends plays, really good vision down the field, uses the cadence well, is a good situational player. I mean, he’s one of the great quarterbacks in the National Football League; no question about it.”

Like Brady, there’s no shutting down Rodgers. He’s going to make plays, and there are times he’ll drive you insane making plays despite a solid defensive effort.

However, there’s proof both on film and in the statistics that Rodgers’ efficiency drops more than other great quarterbacks when he’s under pressure.

If you don’t apply pressure on Rodgers, he’s nearly unstoppable, but when the pass rush can disrupt the future Hall of Famer, his passer rating plummets.

In fact, Rodgers’ 56.3 passer rating while under pressure ranks 20th out of 28 qualified quarterbacks this season.

The key to pressuring Rodgers, much like Brady, is to harass the Packers quarterback without using multiple blitzers.

That’s because Rodgers is terrific at finding his hot reads and finding the weaknesses in the defense when the secondary has fewer players in coverage.

But the Packers’ previous seven opponents showed that Rodgers is a mere mortal when he has to operate under pressure.

Below, we’ll go over some of the ways opposing defenses limited Rodgers by pressuring him, and highlight instances where the former MVP was less than stellar in those situations.

In a perfect world, the Patriots would use a coordinated four-man pass rush to attack the Packers offense on Sunday night.

The disclaimer of a perfect world, of course, is used here because it’s often difficult to get home with only four defenders rushing the quarterback.

Both the Lions and Rams were successful using a four-man rush in their wins over Green Bay earlier this season.

Let’s start with a play from the Packers’ loss to Detroit in Week 5.

On this play, the Lions bring four at Rodgers, but their rush coordination is very purposeful. All four defenders use power moves aimed to collapse the pocket around the quarterback, and the edge defenders do an excellent job of wrapping tight around the tackles and staying level with Rodgers to eliminate any escape routes for the fleet of foot quarterback. Lions defensive tackle Da’Shawn Hand beats a double-team when Packers center Corey Linsley disengages from the block just as left guard Lane Taylor loses leverage, and Hand gets the ball out on the strip-sack. Although the Lions rush is effective, Rodgers’ process on this play is suspect. Look at the top of the screen on the overhead view. The Packers get exactly what they want: they have utility man Ty Montgomery working a two-man route concept with tight end Jimmy Graham. Montgomery is wide open in the flat as Graham creates the rub and clears space, yet Rodgers, who’s working that read in plenty of time to make the throw, holds the ball and decides to run for the first down rather than passing to Montgomery.

The Rams were also able to affect Rodgers with four-man pressures thanks to All-Pro defensive tackle Aaron Donald.

Although the Patriots don’t have Donald, the Rams’ general strategy is something they’ll likely emulate this week, and they could use top pass rusher Trey Flowers on the interior to exploit the weaknesses there in the Green Bay offensive line.

Here, you’ll see the Rams have four down linemen in a wide front aimed to get one-on-one matchups for their interior players. Rams defensive coordinator Wade Phillips then allows Donald to get upfield on a bull rush while the edge defenders contain and the opposite tackle spies Rodgers over the middle. Donald destroys the left guard on the way to the quarterback and hits Rodgers as he throws. With Donald in his face, Rodgers ends up throwing an interceptable pass into double coverage to tight end Jimmy Graham.

In both of these examples, the Lions and Rams forced Rodgers into turnover worthy plays with their pass rush and managed his scrambling ability perfectly.

It’s risky to blitz Rodgers with six-plus defenders, but defenses have been successful this season with five-man pressures.

These pressure schemes give the defense an extra rusher without sacrificing too much on the backend, and can also catch Rodgers sleeping with his pre-snap work.

Although Rodgers’ experience puts him above most quarterbacks, his ability to reset protections and sniff out blitzes isn’t on an elite level, and the Rams took advantage.

On this first quarter sack, the Rams have five defenders spread out across the line of scrimmage. The one-technique defensive tackle in the middle of the line occupies two blockers with everyone blocking straight up and the center looking for work as a free blocker. The pseudo double-team leaves an unblocked defender to Rodgers’ right as the Packers don’t account for the rusher off the edge. Green Bay had enough bodies to block all of the Rams’ rushers, but Rodgers doesn’t get them into the right protection, and he’s brought down for a huge loss.

Even when the Packers did pick up the blitz, the pressure has negatively affected Rodgers this season.

On this play, the Lions bring a five-man pressure and Packers left guard Lane Taylor does an excellent job picking it up by coming off a double-team and on to the blitzing linebacker. The route design behind the blitz works to perfection for Green Bay as well. They run top wideout Davante Adams across the field on an intermediate crossing route with wide receiver Marquez Valdes-Scantling creating traffic on a clearout route up the seam. Detroit cornerback Darius Slay gets held up when he goes over instead of under the mesh point, and Adams is wide open for a touchdown if Rodgers sees him. However, Lions defensive tackle A’Shawn Robinson bull rushes his way into the backfield causing Rodgers to throw off-balance and off-platform to his check down. We’ve seen Rodgers make harder throws without setting his feet than this one to Adams, but despite it being his primary read on the play, he either doesn’t see or doesn’t feel comfortable throwing it to Adams here.

The Green Bay Packers offense and quarterback Aaron Rodgers will be a formidable test for a streaky Patriots defense.

The Pats themselves have admitted to the fact that they’ve been hot and cold on that side of the ball this season.

And although pressuring Rodgers has worked in the past, it’s a lot easier said than done.

“I think it’s easier from the outside looking in. You say, ‘Just rush him better and get to him,’ but there has to be a plan,” said safety Devin McCourty. “You have to execute it and make it hard for him because it all works together. No matter how well we cover, if we don’t rush well, it won’t matter. If these guys are getting there in two seconds but we’re too deep, or we’re not competitive, that won’t matter either.”

The Patriots’ plan against mobile quarterbacks hasn’t changed: create pressure, mostly in the interior, within the coordination of the rush to keep the quarterback inside the pocket.

Obviously, they’ve struggled with the last part of that equation against other running passers such as Blake Bortles and Mitchell Trubisky this season.

But effectively rushing Rodgers, both creating pressure and containing, will be paramount this week.