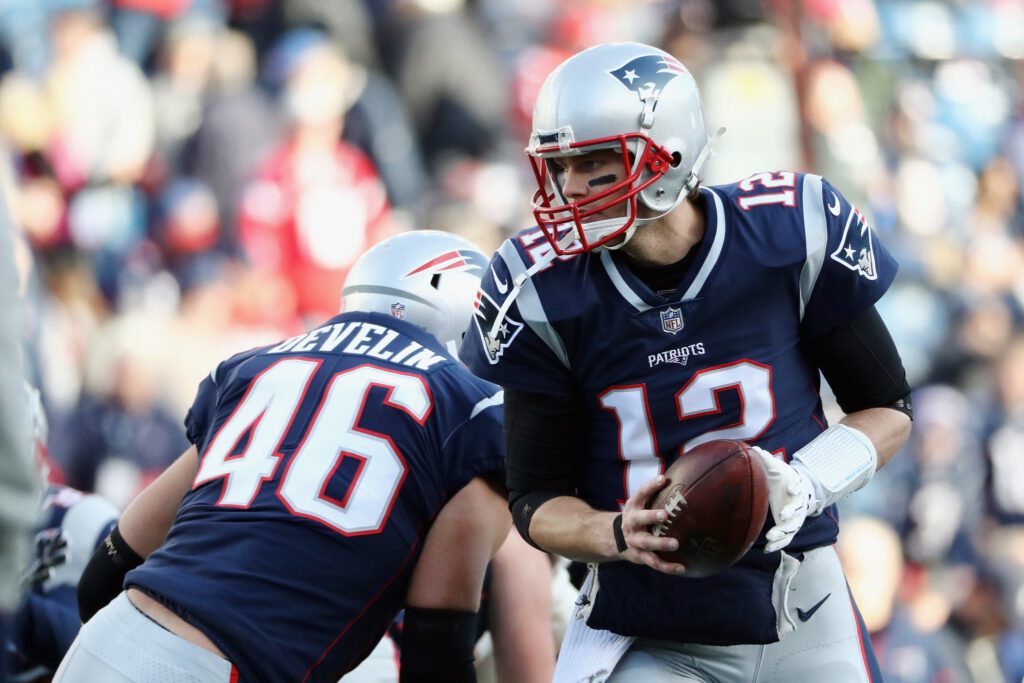 This week’s Patriots game plan will focus on the tall task at hand for Tom Brady and the offense against arguably the best defense in the NFL in the Jacksonville Jaguars.

Scoring on the Jags won’t be easy for the Patriots, but there are a few ways in which Jacksonville is pedestrian when it comes to slowing down opposing offenses.

One of those ways is to avoid traditional 11-personnel (3 WR, 1 TE, 1 RB), which was perfectly articulated by Warren Sharp of Sharp Football before the AFC Championship Game.

However, there’s another avenue in which you can take advantage of the Jags’ aggressive nature on defense, and that’s with the play action passing game.

Last season, the Jaguars allowed the sixth-most yards per reception on play-action passes (14.7) and a 95.6 passer rating when opposing offenses ran play action.

In non-play action situations, those numbers dropped to 9.8 yards per reception and a 70.5 rating.

And it wasn’t just the box score stats that suggest the Pats should attack the Jags with a play-action heavy offense on Sunday.

The Jags defense received a 93.9 overall grade on non-play action situations from Pro Football Focus, but that grade dropped all the way down to 65.5 when opposing offenses ran play action (out of 100).

The play-action pass is typically a hallmark of Pat Shurmur’s offense, but the Giants and quarterback Eli Manning saw terrific returns in Week 1 with run fakes.

Eli’s passer rating increased by 26.9 points and his average yards per attempt rose from 5.1 to 8.5 on play-action attempts.

The strategy also worked out well for Tom Brady and the Patriots in last year’s AFC Championship Game, as Brady had a ridiculous 129.2 quarterback rating off of play-action compared to a still terrific 101.9 without play-action.

Team’s shied away from running play-action against the Jaguars last season likely due to their vaunted pass rush. The Jaguars defense faced the fewest play-action pass attempts in the league last year.

However, Patriots center David Andrews doesn’t believe it’s more difficult to pass block on play-action dropbacks saying, “no, I don’t think so. One, you have to have some sort of a run game in general for those plays to work and I think those are such a team effort to make those plays work.”

In fact, the numbers back up Andrews’ assertion.

Believe it or not, the play fake slows down the Jaguars’ pass rush, as Jacksonville pressured the quarterback 10 percent of the time on play-action drop-backs compared to 12.9 percent on traditional drop-backs.

Below, I’ll take you through a few examples both from the Giants and Patriots to illustrate how the two teams exploited this unusual weakness in the Jaguars defense:

The Patriots only ran play action on 16.7 percent of Tom Brady’s dropbacks in the AFC title game a year ago, but the Pats offense was extremely effective on Brady’s seven attempts.

Here’s an example of a terrific play design by offensive coordinator Josh McDaniels against the Jaguars’ cover-3 scheme. McDaniels sends Cooks and Amendola on hard vertical stems on the same side of the formation. That makes cornerback A.J. Bouye retreat thinking that at least one of them will run vertically, and Bouye must take the deepest vertical threat with the slot defender only dropping into an underneath zone as apart of this scheme. Cooks realizes that Bouye is setting for a vertical release and stops his route on the comeback, and the slot defender needs to slide under Amendola who eventually runs an in-cut, leaving the sideline vacated. The fake on this play sucks in the entire Jaguars front seven, leaving this cat and mouse game on the outside to develop into a one-on-one situation for both Patriot receivers. Also, notice the protection scheme on this play. It’s max-protection for the Pats as they only send two receivers into the passing pattern to give Tom Brady plenty of time.

This passing concept is a staple of the Patriots offense with tight end Rob Gronkowski running a seam route behind the linebackers off of play action. Jaguars safety Tashaun Gipson (#39) hesitates slightly to carry Gronkowski due to the play fake, and Gronk runs right by him into the intermediate part of the field. You actually see both Gipson and middle linebacker Telvin Smith take a step or two towards the line of scrimmage. That prevents both players from dropping underneath Gronk and leaves an open throwing lane for Tom Brady.

These two plays exemplify what Andrews was talking about when it comes to play action passes being a team effort.

Andrews also added, “whether it’s us [the offensive line] selling the run or the running back selling it, it’s a team effort. If they don’t feel the run or it doesn’t look like the run it’s almost a useless play.”

This was a terrific call by Shurmur on a classic cover-3 beater. First, watch the reaction from the Jaguars linebackers to the play fake. Both Telvin Smith and Myles Jack rotate towards what appears to be a counter handoff to Saquon Barkley. That leaves the middle of the field vacated with Odell Beckham running a deep crosser, and #21 A.J. Bouye also hesitates due to the fake. The crosser is a perfect call here against cover-3 as the vertical route on the opposite side of the formation occupies the two other deep defenders in the secondary, meaning there’s nobody there for Bouye to pass Beckham off to as he should in this coverage, and no linebackers underneath to get in the passing lane. Manning runs a boot action here and finds a wide open Beckham for a massive gain.

Here’s another great play call by Shurmur that doesn’t gain any yardage due to a drop by Giants tight end Evan Engram. The Giants run straight play-action, and it appears that Engram is staying in to block. The play fake and Engram’s block sucks Telvin Smith in and he’s slow to react when Engram releases on the drive route. This would be an interesting wrinkle for the Patriots to throw at the Jaguars off of their typical max-protect play action scheme.

The Jaguars defense is one of the best units in the NFL, and you don’t need any fancy stats to tell you that.

Therefore, if you attack the Jags with a conventional offense with straight drop-back passes and traditional 11-personnel, it’s almost impossible to move the football consistently.

In last year’s AFC Championship Game, as you’d expect, the Patriots were most successful when they were unconventional, as their heavy personnel groupings and play-action passing attack were by far their most efficient concepts against the Jaguars.

And the Giants, despite only scoring 15 points, were able to throw the Jaguars off their game in Week 1 taking advantage of similar flaws in the Jacksonville D.

The Jaguars defense is an extremely aggressive unit.

They play a simple defense that doesn’t change much based on their opponent, which allows their players to fly around the field.

As a result, the best way to attack them is by using that aggressiveness against them, employing misdirection to get them to overcommit to specific actions.

Patriots offensive coordinator Josh McDaniels is one of the best in the league at game planning against opposing defenses, so expect him to pick up on these wrinkles, and take advantage of them on Sunday.