Patriots Gameplan: Why Can’t the Chargers Cover Running Backs and How Will the Pats Match Up in the Secondary? 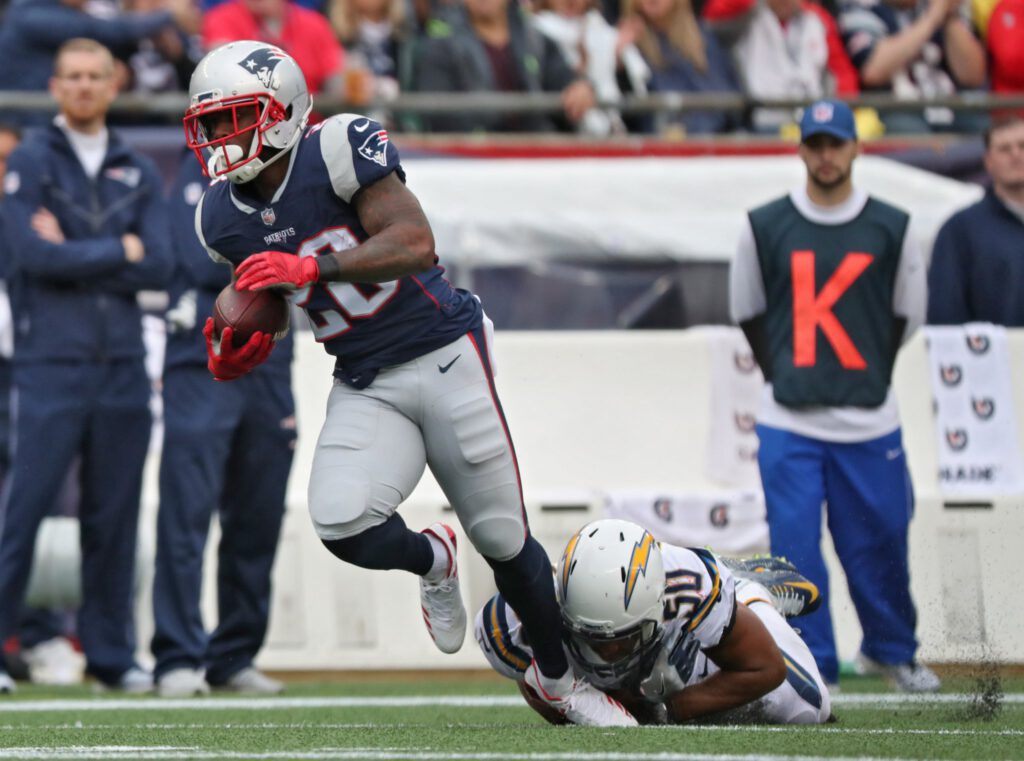 FOXBOROUGH — For the first time in a while, the Patriots will welcome a real football team to Gillette Stadium for Sunday’s Divisional Round matchup.

No march of the tomato cans this year as the Los Angeles Chargers (13-4) come to town on the heels of an impressive defensive performance on Wild Card weekend.

On paper, the Chargers have the Patriots beat in terms of roster talent; New England has the better offensive line, and one could argue they have the advantage at quarterback.

But the Chargers check the rest of the boxes if you’re doing a side-by-side comparison.

Luckily for the Patriots, the one aspect of Sunday’s game before the game where they hold the cards is underneath the hood of head coach Bill Belichick.

On offense, Tom Brady and company should be familiar with Gus Bradley’s Seattle-style scheme, but the Chargers have talent and speed at all three levels of the defense.

And defensively, the Patriots will need Belichick to be at his best as the Chargers offense is loaded with a borderline Hall of Fame quarterback and a fully-stocked arsenal of weapons.

Below, we’ll discuss how the Patriots can attack the Los Angeles defense and how I see New England matching up with the Chargers’ receivers in the passing game:

“Coach [Gus] Bradley runs the Seattle system, and that’s again, a very sound and proven system of defense. That’s the core of it. Yeah, there’s game-to-game adjustments. I’m sure they’ll play Tom Brady differently than they played Lamar Jackson like anybody would. But their scheme is still pretty fundamentally their scheme, and they’ve had so much success with it. They’ve been one of the top defensive teams for the last couple of years. I can’t imagine them straying too far from the principles of what’s made them so successful.”

As a result, the Patriots’ running backs on passes out of the backfield will be critical to how this game plays out schematically when Brady has the ball.

Last season when these two teams met, the Patriots’ running back trio of Dion Lewis, James White and Rex Burkhead caught 14 of 15 targets for 163 yards.

And nobody needs to be reminded of James White’s performances in Super Bowls against Seattle and another disciple in Atlanta (Dan Quinn) against this defense.

The trend continued for the Chargers in 2018, as they allowed the most receiving yards to running backs in the NFL (973).

The question now is not if the Patriots can exploit this flaw, but why is it so successful and what counters can Josh McDaniels go to if Bradley focuses on taking the running backs away?

Let’s start with why it works; it all stems from the core coverage of the system, cover-3.

The Chargers defense ran cover-3 on 42 percent of passing plays in the matchup between these two teams last season, and that’s roughly where they are at this season.

When it comes to covering running backs, it all starts with how the defense decides to defend the slot receiver.

In standard cover-3, a vertical release by the slot receiver is the responsibility of the three deep players behind the second-level defenders that drop into underneath or flat zones.

However, in pattern match cover-3, the slot defender carries all vertical routes downfield, a counter to vertical passing concepts that flood those three-deep zones with multiple routes.

Here’s an example of a cover-3 pattern match look from the Chargers against the Patriots last season.

As stated above, the counter to cover-3 is to run vertical routes on one or both sides (four verts) of the formation to present a problem for the defense.

The Patriots lined up in a two-by-two set (two perimeter receivers to each side of Brady) all day long to balance the field and spread out the Chargers defense. On one side of the formation, the Patriots had the perimeter and slot receiver run go routes, and the Chargers had the slot match the vertical release knowing the Patriots like to stretch the field up the seam. With the outside and slot defensive backs downfield, there was nobody left to cover the flat, and Rex Burkhead jogged to a first down.

If the Chargers do play traditional spot-drop zone against the Patriots, they’ll take out the running back with a flat defender, but that will create opportunities for Brady downfield to hit throws down the seam.

On this play against Baltimore, the Chargers played basic cover-3, and Lamar Jackson missed a wide-open Mark Andrews on the seam route.

Another option for the Patriots against the zone-heavy Chargers would be to go to their flood concepts.

The Patriots have a few go-to zone beaters that stress one area of a zone coverage with multiple receivers running into the same zone; one of those favorite calls for Josh McDaniels is the “scissors”  concept.

The Patriots like to run a double-post with the corner route coming from James White out of the backfield. The boundary corner is forced to carry the vertical release from Dorsett and White runs the corner right into the vacated zone. By the time outside corner picks up White, it’s too late.

Later on in the season, the Patriots ran another variation of “scissors” on a touchdown to Rob Gronkowski.

Here, Hogan’s outside release on the post holds the corner again, Develin releases into the flat to prevent the flat defender from getting depth in his drop to slide underneath Gronk, and Gronk runs a corner route into the vacated zone.

The Patriots will also overload one side of the field to stress zone coverage in a three-by-one set.

On this play, they align three receivers to Brady’s right with Josh Gordon as the “X” receiver in a reduced split to the left. The Patriots open up the middle of the field for White on an angle route, and the safety rotating down is out-leverage to the inside.

If the Patriots want to get really wonky, they could steal from Andy Reid’s playbook and run out of a four-by-one formation.

In zone, it’s very difficult to account for four receivers on one side of the field increasing the likelihood of a busted coverage.

Based on this information, it would seem that the best approach for the Chargers would be to play man coverage and rely on their safeties to cover the Patriots’ tight ends and running backs.

But if they stick to their bread and butter zones, Brady and the Patriots have a history of finding the soft spots in those coverage.

If they go man, it’s on the Patriots’ skill players to win their one-on-one matchups.

One last point, there will be a lot of talk this week about the Patriots leaning on their running game if the Chargers put six or seven defensive backs on the field.

On the one hand, the Patriots will likely match that look with some of their heavy packages to either run the ball on the smaller defenders or force LA to put their linebackers on the field.

However, as Chargers coach Anthony Lynn told us on a conference call, Los Angeles has been able to stop the run in dime or quarters defense thanks to the alignment of the defensive line.

“Stopping the run has been something that we’ve taken some pride in and our pass-rushers, they’ve been very unselfish. Joey Bosa and Melvin Ingram, they’re playing run techniques a lot of the times instead of pass techniques. I’m sure that’s costing them some sacks and us some pressure, but we have to be able to stop the run,” Lynn said.

The Chargers put their star pass rushers in a “bear” front then allow them to shoot gaps to aggressively make plays on the ball carrier behind or at the line of scrimmage.

That’s not to say the Patriots can’t run the ball, but if they do, it won’t be as easy as you’d think just because the Chargers have extra defensive backs on the field.

On the defensive side of the ball, the Patriots will need to get after Philip Rivers to exploit a weak offensive line and throw the timing of the offense off.

But they’ll still need to take care of business in the secondary, and how they match up with the Chargers’ receivers will be something everyone is monitoring after kickoff.

Regardless of the individual matchups, I expect the Patriots to deploy one of their favorite coverages against teams with an elite wide receiver like Chargers Pro Bowler Keenan Allen: one-double.

In this scheme, the Patriots use what they call a “cone” bracket on the opponents top wideout to take them out of the game with two defensive backs.

For reference, here’s a play sheet from Belichick’s playbook in Super Bowl XXV when his then Giants defense took on the Buffalo Bills. In that game, the double was on Buffalo Hall of Famer Andre Reed who was held to eight catches for 62 yards.

The rules are simple: the corner will play over the top with outside leverage to stop any fades or out-breaking routes while the safety accounts for in-breaking routes.

As you can see, the install has a coverage call for both a perimeter and slot alignment, which will be essential against Allen who lines up everywhere.

And if the Patriots play dime, they can drop another safety into the deep middle of the field or shade him towards Mike Williams as help.

Now on to a few examples from this season:

Against the Steelers, the Patriots used a “cone” bracket on Antonio Brown in critical situations.

Here, the Pats bracketed Brown with Jason and Devin McCourty at the top of the screen. The coverage eliminates Brown from Roethlisberger’s progression, and he attacks a one-on-one matchup between JC Jackson and JuJu Smith-Schuster, and Jackson makes one of the pass breakups of the season for New England. The Pats were in nickel, so Jackson didn’t have any safety help, and the rookie was still up to the task.

On this play, the Patriots were in dime defense, which allowed them to put a safety over the top of Stefon Diggs as well. The McCourty twins blew the coverage, and Thielen should’ve had a big play, but it’s an excellent example of how the strategy can make things difficult on the receivers with Thielen doubled and Gilmore on Diggs with safety help.

If I had to guess, and with the Patriots’ tendency to shadow receivers in mind, I’d expect Gilmore to track Allen, Jackson to be on Mike Williams and Jason McCourty to run with either Tyrell Williams or Travis Benjamin.