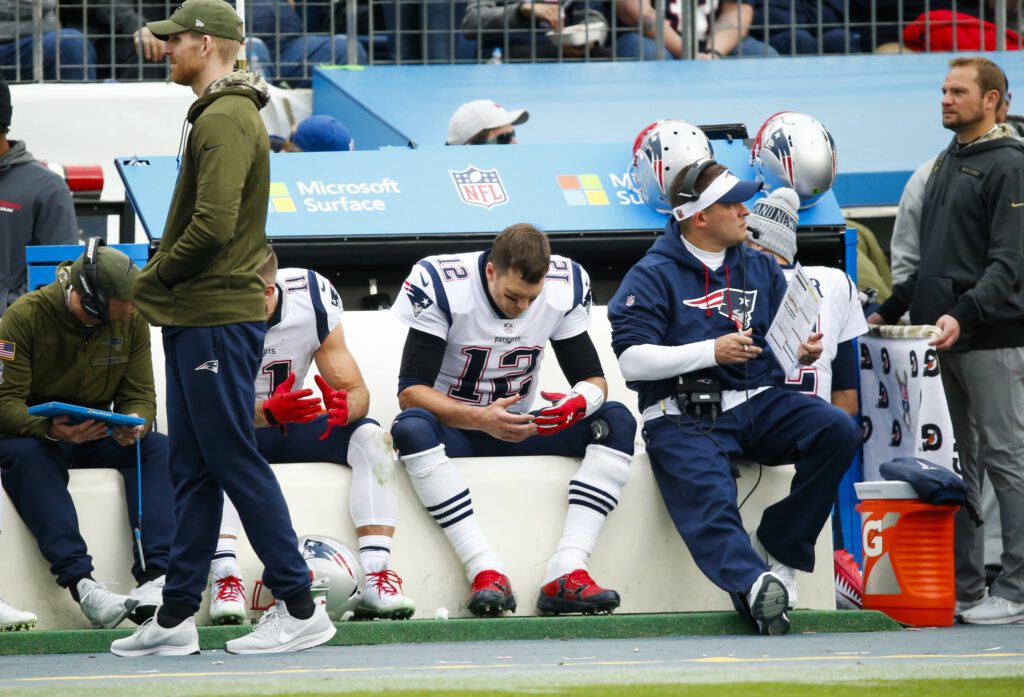 FOXBOROUGH — Despite their recent struggles, whenever the Patriots travel to the Meadowlands to take on the Jets we get a close game.

Over the last five seasons, the Patriots are 3-2 in road games against their divisional foe, and all five games were decided by seven points or less.

However, this years version of the Jets, especially with rookie quarterback Sam Darnold sidelined with a foot injury, present very little threat to the Patriots this week.

New York has lost four straight games, and before their bye week, were embarrassed by Matt Barkley and the Bills at MetLife Stadium losing to Buffalo 41-10.

With that in mind, this week’s Patriots gameplan focuses on a few key areas where you’d like to see some improvement against a Jets defense that has talent and ranks 12th in Football Outsiders’ DVOA metric (Defense-adjusted value over average).

Before the bye, the Patriots offense had its worse performance of the season since the return of Julian Edelman in Week 5, and Todd Bowles’ defense presents a perfect litmus test.

For example, the Patriots struggled to protect Tom Brady when the Titans defense brought extra rushers on blitzes with all three of Tennessee’s sacks coming on the blitz and Brady’s passer rating plummeting to 58.8 in those situations.

This week, the Patriots will face a known blitzer in Bowles and a Jets defense that blitzes the quarterback 35.5 percent of the time (fifth-most in the NFL).

Secondly, the Jets run defense is average (17th in DVOA), and the Bills rushed for 212 yards at over 4.5 yards per rush against New York in Week 10.

The New England offense is at its best when rookie running back Sony Michel is churning out yards on the ground, and this game gives Michel and the Patriots ground attack an excellent opportunity to find a rhythm.

And finally, wide receiver Josh Gordon has certainly made his presence felt in his short time in New England, but Brady has only connected on 53.1 percent of his passes intended for Gordon, the fifth-lowest completion rate between a quarterback and receiver in the NFL (min. 45 targets).

Luckily for Gordon and the Patriots, the Jets defense has surrendered the sixth-most receiving yards to wide receivers this season (1,859).

Below, we’ll go over the challenges the Jets defense presents and examine ways the Patriots offense can work through some of their issues this week.

Over the last two games, Patriots quarterback Tom Brady has been sacked four times on blitzes.

Some of that falls on Brady, but the guys protecting him have struggled to keep defenders away from the Patriots quarterback.

“There’s nothing that we cannot handle,” said Patriots running back James White. “It’s everybody just giving Tom [Brady] more time and knowing who to block and blocking those guys to give Tom enough time to find the open receiver, read the zone out. We can just do a lot better job with that.”

The Patriots players said this week that the there’ve been issues with both execution and communication in blitz pickup over the last few weeks.

The Titans gave the Patriots problems with double A-Gap pressure from defenders blitzing off the line of scrimmage.

On this play, linebacker Wesley Woodyard and safety Kevin Byard attack opposite A-Gaps on a twist. The Patriots should have Woodyard blocked, but the Titans linebacker runs through running back James White, and right guard Ted Karras can’t close the gap before Woodyard gets to Brady. The communication appears to be good, but the execution was not.

Against the Packers, Green Bay got some free runs at Brady in the third quarter. Linebacker Antonio Morrison gets the sack after he’s undiagnosed on the blitz before the snap, and nobody picks him up. It’s also possible that White had a dual-read on the play, and because Morrison disguises this blitz well, the Pats running back goes out instead of staying in leaving Brady unprotected. Either way, chalk this one up to a mental error, not a physical mistake.

As for the Jets, Bowles has some go-to pressure schemes, and most of them center around safety Jamal Adams.

Adams’ 11 pressures this season trail only Chargers safety Derwin James among defensive backs, and as head coach Bill Belichick pointed out on Tuesday; the second-year pro is essentially a linebacker in Bowles’ scheme.

“Adams is like a linebacker. He’s around the line of scrimmage a lot,” Belichick said. “He blitzes, he runs through, he’s aggressive, he’s got tackles for losses, sacks, pressures. Yeah, so he’s down there around the line a lot, or sometimes he’s kind of roaming free in the middle, but he’s a contact player. He’s aggressive.”

Here, the Jets bring a five-man pressure often referred to as a “fire blitz” paired with a cover-3 zone in the secondary. Adams comes through the C-Gap, blows up the running back, and forces the ball out of the quarterback’s hand. A play like this shows how dangerous Adams can be when he blitzes the quarterback.

This week, the Patriots will need to prove that they’ve shored up their issues in pass protection over the bye week.

The Patriots’ running game survived the absence of Sony Michel, but when Michel returned against the Titans, they were unable to run the ball both due to execution and the score.

In the Patriots’ seven wins this season, they’ve rushed for nearly 125 yards per game on over four yards per carry.

In their three losses, those numbers drop to 70 yards per game and only 3.4 yards per rush.

In Week 10, the Bills ran all over the Jets defense (212 rushing yards) with their zone rushing attack on schemes that the Patriots have adopted at times this season.

On this play, Buffalo uses an outside zone scheme with a dummy sweep to spring running back LeSean McCoy for a 28-yard touchdown.

The Patriots like to use jet motion with zone blocking on tosses to get their running backs on the perimeter. The blocking develops differently but the idea is the same, and the result is a touchdown for James White.

To hit its ceiling this season, the Patriots offense needs a potent rushing attack, and the Jets present an excellent opportunity to get the ground game going again.

The Josh Gordon trade was a massive win for the Patriots, but the Brady to Gordon connection hasn’t been very efficient.

Against Tennessee, Gordon hauled in only four of his 12 targets, as throws to the perimeter continue to be hit or miss.

Luckily for Gordon, a far inferior player in Bills rookie Robert Foster hauled in two long passes against the Jets a few weeks ago.

Foster ran by cornerback Tremaine Johnson on the first one, and jumped over Morris Claiborne later on in the game.

Inherently, Gordon’s targets are lower percentage throws, and we’ve seen flashes of Gordon’s ability to take the top off the defense.

But the vulnerability of the Jets cornerbacks presents a juicy matchup for Brady’s newest target to get on the same page with his quarterback.

Patriots head coach Bill Belichick will hype up the Jets both publicly and to his team behind closed doors all week.

However, even though the Patriots can’t take the Jets lightly, they’re a far superior team.

For those outside the building, the focus this week will be on how the Patriots execute offensively in what should be an easy victory.

In other words, the Patriots will get the win, but will they look good in the process?

From this perspective, how the Patriots handle New York’s blitz-heavy defense will be item number one on the checklist.

The Patriots need to give Tom Brady more time in the pocket to work through his reads against the blitz, and Brady needs to speed up his process when the defense brings extra pressure.

Next, we’ll see if running back Sony Michel can get back to where he was before his injury scare and if the chemistry between Gordon and Brady improves.

The Patriots will beat the Jets on Sunday, but they need to show that their recent struggles on offense are behind them.