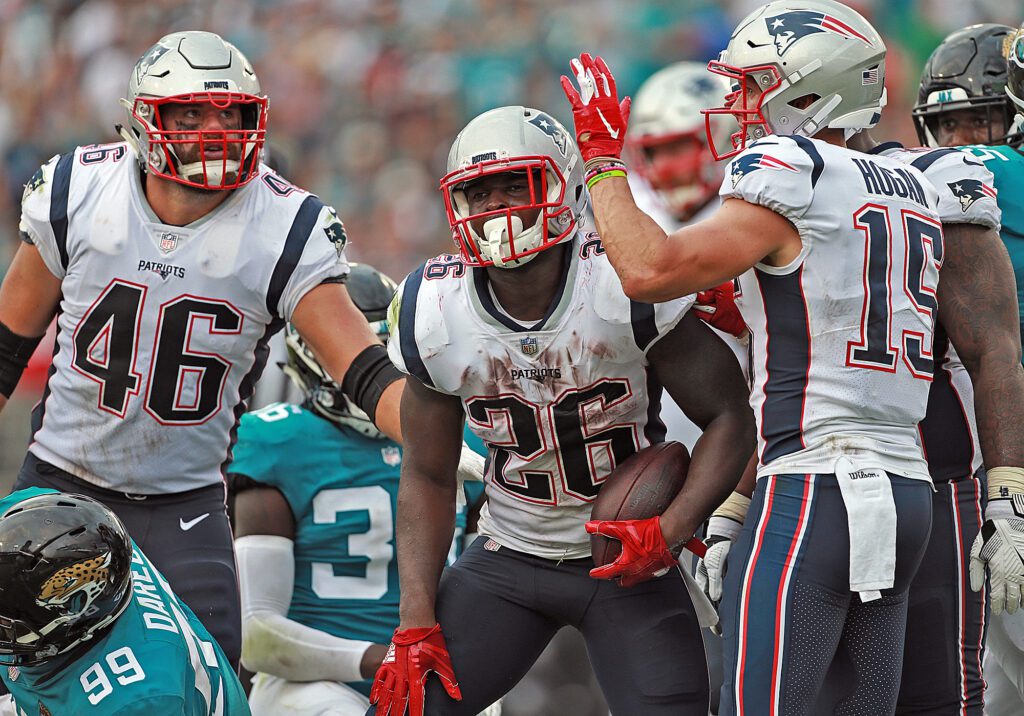 This week’s Patriots game plan will focus on a struggling New England running game that has a juicy match-up against a porous Lions run defense.

Through the first two weeks of the season, the Patriots have averaged only 3.7 yards per carry, which ranks 25th in the NFL, and New England ranks 24th in rush offense DVOA (fourth in 2017).

And there’s plenty of blame to go around, as the Patriots have seen regression in a small sample from both the blocking up front and the running backs carrying the football.

So far this season, the Pats run blocking grade has dropped all the way to 61.3 in PFF’s grading, which ranks 14th in the NFL.

But there’s been an even bigger regression when it comes to yards created by the running back position since the departure of Dion Lewis.

Last season, Lewis averaged 3.2 yards per rush after contact, as the former Pats running back broke 42 tackles on 180 carries toting the rock for New England in 2017 (tied for fifth among RBs).

And on ten carries in his first career game, rookie Sony Michel averaged 1.7 yards per rush after contact in Jacksonville last week.

To put it in simpler terms, the Patriots running backs, granted in a small sample size, aren’t creating their own yards at a high enough rate.

Luckily for the Pats, the Detroit Lions have one of the worst run defenses in the NFL through the first two weeks of the season.

The Lions defense has allowed a league-leading 179.5 rushing yards per game this season, and rank 31st in opponent rushing average allowing 5.6 yards per carry.

Detroit’s shaky run defense could be just what the doctor ordered to get the Pats running game, and rookie Sony Michel, going after a subpar start to the season.

But on the other hand, if the Patriots don’t get going on the ground, we might be looking at an offense that relies heavily on quarterback Tom Brady to move the ball through the air.

Below, I will go through some of the blocking schemes that proved to be successful against Detroit in their first two games of the season, and explain how the Pats can take advantage of a leaky run defense:

The Jets and 49ers had tremendous success against the Lions defense on zone blocking schemes.

Jets running back Isaiah Crowell and 49ers back Matt Breida each broke off rushing touchdowns of 60-plus yards running behind an outside zone blocking scheme.

On an outside zone scheme, an offensive lineman’s first step is going to come at a 90-degree angle toward the sideline.

If you have a defensive lineman directly over you, you must block that defender.

But if you’re a free blocker, the outside zone concept allows you to climb to the second level to make blocks on defenders at the next level of the defense.

On Breida’s 66-yard touchdown run, you’re going to see Niners rookie right tackle Mike McGlinchey immediately climb to seal off Lions linebacker Christian Jones while left guard Laken Tomlinson executes a perfect cut block on the other Lions linebacker, Jarrad Davis. Fullback Kyle Juszczyk takes on safety Glover Quin in the hole, and Breida is off to the races. Although his offensive line springs him, you see Breida’s vision to cut to the open field which causes two Lions defenders to collide in the secondary, and he also gets a block from wide receiver Pierre Garcon as apart of a convoy to the end zone. Breaking off long runs is a team effort, and this is a perfect example of all nine players (excluding the quarterback and running back) working together to break off a huge run for a touchdown.

Crowell’s touchdown run also came on an outside zone scheme, but the Lions front was in a very different look. The Jets have three tight ends on the field, so Detroit matches with an eight-man box, including seven players on the line of scrimmage. The Jets get a great block from right guard Brandon Shell, who walks defensive end Da’Shawn Hand right out of the hole. But the Jets center and right guard trip over each other’s feet, and Crowell is able to run through a tackle attempt by Ricky Jean Francois before accelerating to daylight, making this one a great example of how yards created by the running back can lead to massive gains.

In case you were wondering, yes, the Patriots do run some outside zone as apart of their running game.

Here they are running outside zone last week against the Jaguars on Rex Burkhead’s 12-yard run.

Outside zone is also a terrific scheme for a running back like Sony Michel, who can use his speed to find cut-back lanes and accelerate into the secondary, and it was the primary scheme Michel run behind at Georgia last season.

Traditionally, the Patriots have featured a heavy dosage of man blocking schemes up front in the run game, and those worked against the Lions as well in the first two weeks of the season.

One of the staples of the Patriots running game is the counter play, led by right guard Shaq Mason’s devastating pull or kick-out blocks. The play above is from the Patriots’ matchup with the Dolphins last season in Week 12, and you can see Mason destroy Dolphins safety Michael Thomas.

The Niners ran their variation of a counter handoff for a significant gain with Breida once again as the ball carrier. Head coach Kyle Shanahan runs a decoy jet sweep while the left guard and fullback Kyle Juszczyk, lined up as a tight end, pull into the hole on the right side with tight end George Kittle and right tackle Mike McGlinchey also winning their blocks, and Breida has a massive hole to run into the Lions secondary.

Up next is what’s referred to as “duo,” an old-fashioned blocking design that has been a part of every NFL playbook for years.

The scheme is called “duo” because the offensive line is going to execute two double-team blocks on the two interior defensive linemen to create a massive push in the middle of the line of scrimmage.

The 49ers ran duo to pick up six yards on the Alfred Morris run above, and as you can see the interior of the Niners offensive line blew the Detroit front off the line of scrimmage.

The Patriots ran duo on Sony Michel’s 15-yard run against the Jaguars, and they blocked it so well that it created a 52-car pile up in the middle of the Jaguars defense before Michel ran over Jags safety Barry Church for some extra yardage. Left guard Joe Thuney also does a great job to climb to linebacker Telvin Smith once he realizes that teammate David Andrews has the block on Arby Jones under control.

The Patriots running game has left something to be desired in the first two weeks of the 2018 season.

And although Sony Michel flashed his first-round abilities, his debut didn’t exactly excite people despite his apparent all-around talent.

The Patriots will travel to Detroit with an opportunity to impose their will against a Lions run defense that couldn’t stop a nosebleed in its first two games.

The Jets and 49ers gave the Patriots a blueprint, and now the Pats need to get their running game going to take some of the pressure off of Tom Brady and the passing game.

If the Patriots can’t run the football against the Lions, the slow start will become an area of concern for New England.