Patriots Gameplan: Why the Pats Should Run the Football vs. Bills Even Without Sony Michel 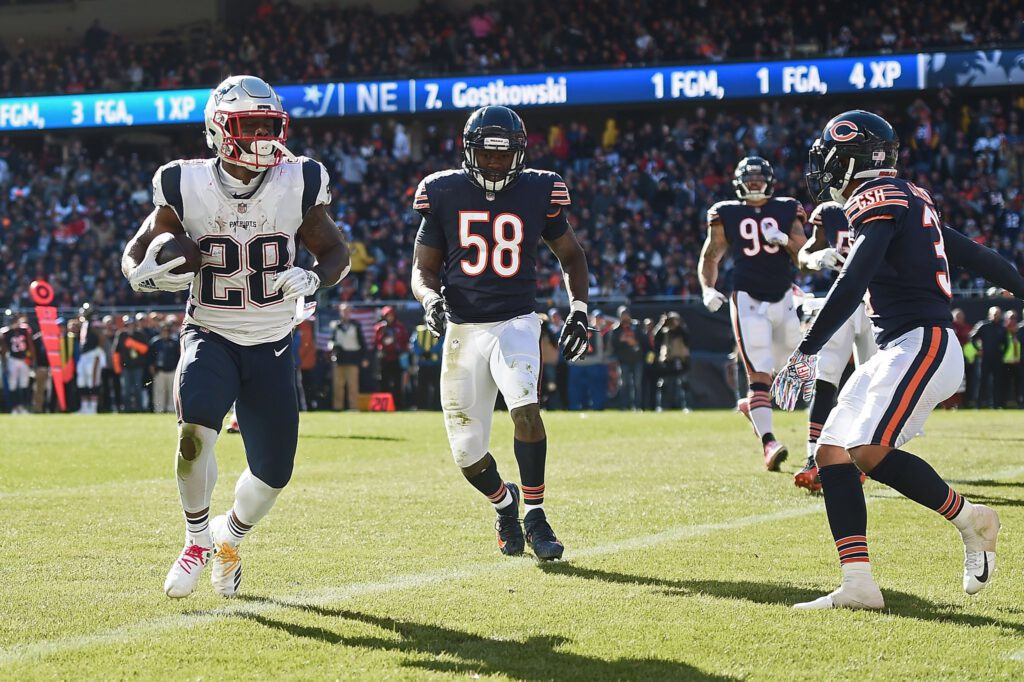 This week’s Patriots gameplan focuses on the Buffalo Bills defense that is currently sixth in total DVOA according to Football Outsiders.

Over the last two seasons, the Bills have built a defense that’s among the league’s best.

This season, the Buffalo defense is sixth in total DVOA, fourth in yards per game, and has the fifth-best pressure percentage on passing plays in the NFL (38 percent).

The Bills, led by pass rushers Jerry Hughes and Lorenzo Alexander and second-year cornerback Tre’Davious White, have one of the best pass defenses in the league.

Buffalo has allowed only 210.1 passing yards per game (fourth) through their first seven games and is fourth in DVOA against the pass.

However, the Indianapolis Colts gave the Patriots a blueprint of how to attack the Bills defense in their 37-5 victory over Buffalo last week.

Despite having one of the league’s worst rushing attacks, the Colts ran wild over Buffalo gaining 220 yards on 5.9 yards per rush on the ground.

Before you start to question a game plan predicated on running the football in a game where the Patriots will likely be without top running back Sony Michel, consider the following:

Entering last Sunday’s contest against the Bills, the Colts offense ran just 29.3 percent of the time (last in the NFL) and averaged 4.02 yards per rush (24th in the NFL).

Plus, Indy running back Marlon Mack, who led the way with a career-high 126 yards on 19 carries, doubled his yardage total for the season against Buffalo.

In other words, the Colts gashed the Bills on the ground without an elite rushing attack.

Below, we’ll go over how Indianapolis exploited the Bills’ run defense using some of the Patriots’ favorite blocking schemes:

Under Bill Belichick, the Patriots have always featured a power rushing attack designed to impose its will on opposing defense.

Against the Bills, the Colts ran over the Buffalo defensive front utilizing one of New England’s go-to blocking schemes: the G-Scheme.

This blocking scheme is straightforward, but teams have their own spin on things depending on the personnel they deploy on any given play.

Let’s take a look at an example from the Colts. Indianapolis utilized a sixth offensive lineman on 15 running plays on Sunday. This also allowed them to pull the play-side guard into the hole as a lead blocker. As you can see, the Bills have four defenders to the right of the right guard to the Colts’ four blockers. The two tackles and the tight end down block to move the Bills front out of the lane while the guard pulls to the edge defender to spring Mack. Also, notice how the center climbs to the linebacker at the second level at the snap to prevent him from making a play on the ball carrier. The Colts have a hat on a hat to gain the numbers advantage, and Mack goes for 23 yards on the play.

Here’s another example. The Colts spread the Bills defense out with 11-personnel this time. Buffalo matches the three wide receiver set with a six-man box. The tight end at the end of the line and the left tackle once again block down to seal the edge while left guard Quenton Nelson pulls upfield to take on the linebacker, and Mack gains another 16 yards.

Mack gained 68 of his 126 yards on outside runs, and the Patriots should be able to take a similar approach without reinventing their running game.

On inside runs, the Colts threw another wrinkle at the Bills out of their six-man offensive line look.

Here, the Colts overload the line to the quarterbacks right. Then, they double-team the three-technique on the left side of the formation and pull the backside tackle into the hole. The left guard and tackle do an excellent job of executing the double-team and the tackle climbs to a second block on the linebacker. The right tackle takes on one linebacker, the left tackle takes on another, and Mack goes for nine yards.

The Patriots don’t pull the backside tackle very often, but the blocking is almost identical to their counter scheme.

In Week 5, Sony Michel’s 34-yard touchdown run to put the Patriots up two scores late in the game came on their counter scheme which utilizes a pulling guard.

The left side of the Patriots’ offensive line double-teams the defensive tackle at the point of attack, Gronk seals off the edge, and Shaq Mason pulls from the backside to meet the linebacker in the hole to spring Michel.

After the Colts established schemes utilizing pulling offensive linemen, they started to trick the Bills defense with running plays that appeared the same but had different tricks.

On this play, the Colts run the same scheme shown above but with a pulling guard instead of a tackle. Mack takes the handoff and heads toward the hole, and the entire Bills defense reacts to the movement like it’s a simple counter handoff. However, Mack then flips the ball to teammate Nyheim Hines, and Hines comes around on the reverse for a massive gain.

Mack’s 20-yard touchdown run in the fourth quarter was another excellent example of how the Colts fooled the Bills after establishing the power running game.

The Colts run a wham scheme here with the tight end walling off the defensive tackle but look at the players on the second level of the defense. Indy has both guards execute blocks that look like they’re pulling in front of the running back. The two linebackers and the safety (right side) react to the play like it’s going to be a run to the defenses left, and Mack takes the handoff to the right edge for an easy score.

Colts head coach Frank Reich and offensive coordinator Nick Sirianni had some terrific play calls to counteract the power runs they ran earlier in the game.

It’s hard to imagine a scenario where the Patriots lose this game to Derek Anderson and the Buffalo Bills on Monday night.

However, the Bills proved in their upset of the Minnesota Vikings in Week 3 that their defense can dominate a matchup with their pass rush.

The Buffalo defense had two strip-sacks of Minnesota quarterback Kirk Cousins that led directly to points and forced an interception later on in the game by pressuring Cousins.

To slow down the Bills pass rush, the Patriots can expose their run defense that’s weak in comparison.

As stated earlier, the Bills pass defense is fourth in total DVOA this season, but their run defense is middle of the road at 16th in Football Outsiders’ metric.

Although Sony Michel is unlikely to play in this one, that shouldn’t deter the Patriots from running the football.