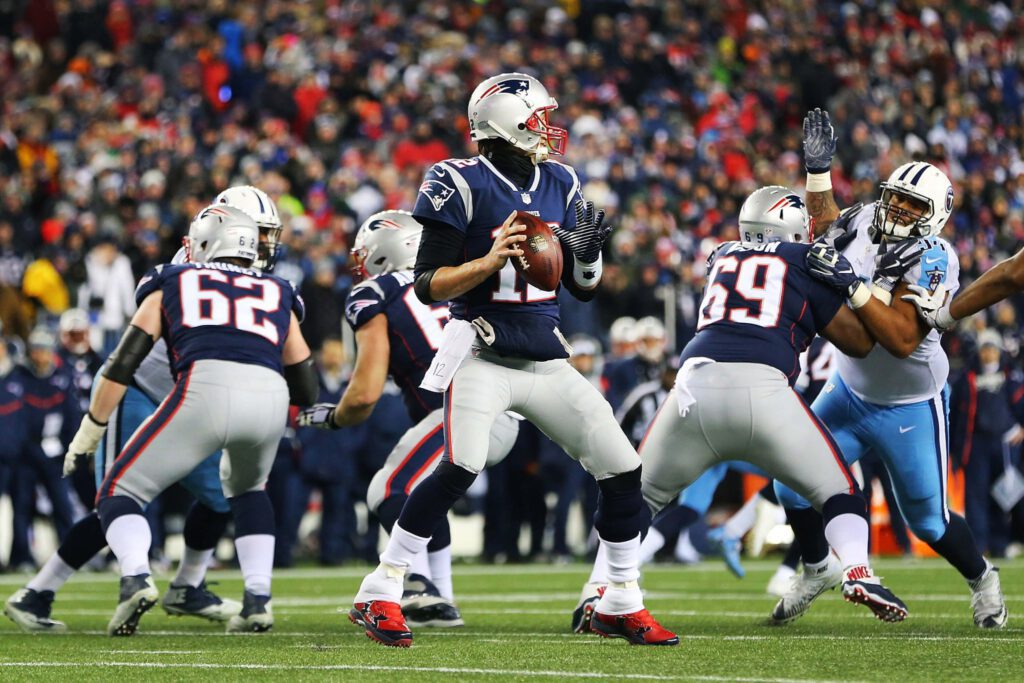 FOXBOROUGH — The Patriots’ matchup against the Tennessee Titans this Sunday has become more about the Titans’ Malcolm Butler than the game itself, and many think the Patriots should expose their former cornerback.

However, although Butler has struggled mightily this season (more on that here), it’s in the Patriots’ best interest to attack another area of the field.

In last year’s divisional round matchup, Patriots quarterback Tom Brady threw for 70 percent of his 337 passing yards between the numbers against the Titans defense.

Schematically, Titans head coach Mike Vrabel has revamped the Tennessee defense, which Bill Belichick said at Wednesday’s press conference resembles what Vrabel did as defensive coordinator of the Houston Texans.

“It’s different,” Belichick told me about Tennessee’s schemes. “[Matt] LaFleur, Vrabel, Pees. Yeah, it’s a little bit of carryover in the kicking game. But, I mean, it’s some of the same players, but it’s different.”

Although their style of play is different, the Titans defense remains vulnerable in the middle of the field, especially at the linebacker position.

Tennessee addressed the inside linebacker spot in the draft selecting Alabama’s Rashaan Evans in the first round, but injuries and inconsistent play have prevented Evans from carving out a role.

That leaves the Titans with starters Wesley Woodyard and Jayon Brown in the middle of the defense, two holdovers from last year’s team.

And as a result of their failures to upgrade the position, the Titans rank 27th in total DVOA on passes between the numbers compared to ninth on the perimeter.

Furthermore, 68 percent of the passing yards Tennessee has allowed this season are on passes into the middle of the defense, and they’re allowing 7.2 yards per attempt on those throws.

Outside the numbers, the Titans defense is allowing only 5.8 yards per attempt.

Below, we’ll go through some of the successful plays from the Patriots’ Divisional Round win over the Titans and show how those same concepts remain successful against Tennessee this season:

Let’s start with throws to slot receivers and highlight a few of Danny Amendola’s game-high 112 receiving yards on 11 receptions against Tennessee in January.

Amendola caught ten of those passes for 106 yards out of the slot, and Julian Edelman should be able to replicate some of that production on Sunday.

The now Dolphins wideout made a living on curls and option routes over the middle of the field.

The option route is a staple of the Patriots offense, and Amendola runs one here against the Titans.

Amendola comes on a crossing route from the inside slot to Brady’s right, and the Titans are in man coverage. That encourages Amendola to continue across the field against Tennessee linebacker Wesley Woodyard. If Woodyard plays zone, Amendola would find a soft spot and sit down over the middle for Brady.

Here’s an excellent example of that from Cowboys slot receiver Cole Beasley on Monday night. Beasley runs a similar route from the outside slot, and the Titans match it with zone, so the Dallas wideout sits down at the sticks for the first down.

The former Patriots slot receiver also destroyed the Titans defense on curls between the numbers.

On this play, Amendola motions next to Gronk into the weak side slot with Gronkowski in a minus split (inside the numbers). The Titans appear to be in man coverage with safety Johnathan Cyprien matched up against Amendola. But Cyprien seems to think it’s zone and decides to jam Gronkowski as the tight end released into his route, and Amendola is left wide open for an easy completion.

Fast-forward to this season, and here’s Ravens slot receiver Willie Snead running out of a different formation on a snag, a similar route to a curl, and Baltimore got the same results this time against zone coverage.

The Ravens and Snead also had success throwing downfield in between the linebackers and safeties against the Titans.

Vrabel’s defense likes to play with a single-high safety, and when opponents spread the field, that forces the Titans defense to have only one inside linebacker, which can leave a void behind the linebacker if you can force the “robber” safety dropping down into the box to move outside the numbers.

That’s precisely what happens here as Cyprien goes to the perimeter rather than the middle of the field, and Snead runs a dig route out of the slot right behind the linebacker into the vacated area for a first down.

Expect offensive coordinator Josh McDaniels to attack those same areas of the field with Julian Edelman playing the role of Amendola on Sunday.

The Patriots also got a combined 108 receiving yards from running backs James White and Dion Lewis (79 from Lewis) in their Divisional Round victory last season.

The Titans haven’t surrendered very many receiving yards to running backs this season, but that’s mostly because opposing offenses haven’t done enough to exploit those weaknesses, and when they have, they’ve had incredible success.

The Patriots’ longest play from scrimmage in the win came on a 31-yard screen pass to Lewis.

The Pats ran one of their favorite screen schemes: play-action with orbit motion into a running back screen into the flat. The multiple fakes had the Titans defense flowing away from the screen, and colliding into each other as they scrambled to the ball. The Titans eventually tackle Lewis, but not before he goes for a huge gain.

On Monday night, the Cowboys ran a similar scheme with running back Ezekiel Elliott for almost an identical gain (37 yards). The only difference was that Dallas utilized jet motion, but the results were the same.

The Pats also realized that they could get easy yardage by throwing to their running backs in front of the linebackers on check-downs over the middle.

Brady goes with play-action here and the fake forces the Titans linebackers to drop eight yards off the line of scrimmage to protect against any intermediate routes. After executing the fake, Lewis sits down underneath the zone defense, and Brady takes the check-down for a five-yard gain on first down. If you back off, Brady will happily dink and dunk his way down the field.

The Jaguars saw a similar flaw in the Titans defense and sent running back T.J. Yeldon on check-downs to pick up easy yardage.

Here, running back James White runs an angle route out of the backfield against Tennessee linebacker Jayon Brown. The Pats send Gronk on a vertical route and Amendola to the perimeter clearing space for White over the middle. White jukes Brown at the top of the route, and goes for 14 yards on the play.

The Patriots should still be able to pick on the Titans linebackers in coverage against their running backs.

Although the Tennessee coaching staff has changed, the personnel in the middle of the field remains the same from last year’s Divisional Round win for the Patriots.

As a result, the Pats should exploit those same matchups that helped them cruise to a 35-14 victory.

The storylines, as they have before the game, will undoubtedly surround Titans cornerback Malcolm Butler regardless of his performance on Sunday.

It may be tempting for Bill Belichick and Josh McDaniels to rub salt in Butler’s wounds, but that approach would be another example of personal feelings getting in the way of doing the right thing.

The Patriots can win this game however they want; they can throw at Butler to highlight his struggles or they can attack the real weaknesses of the Tennessee defense that work in their favor.

One would hope that Belichick will opt for the latter.