Patriots Get Physical In Demolition of Dolphins 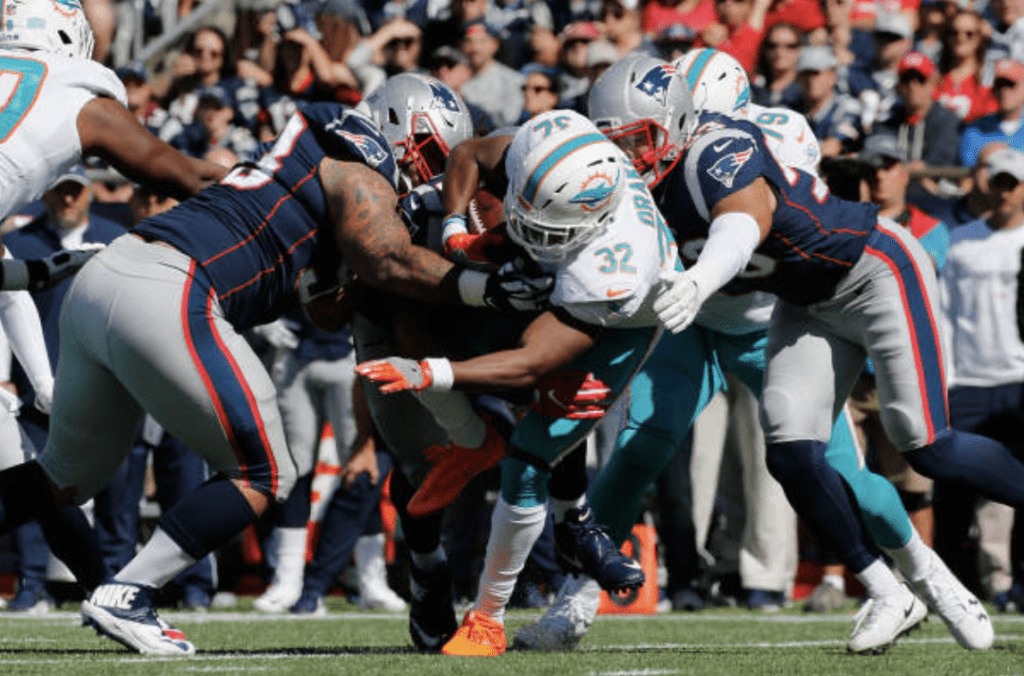 FOXBORO — The score was sexy but the win was not. The 38-7 ass-kicking of the Dolphins Sunday was exactly what the Patriots needed. A smash-mouth win over a loud mouth Miami team that was beginning to think it was actually ready to assume the mantle in the AFC East after beating the Titans, Jets and Raiders to open the season.

“Well, we really didn’t anticipate getting out-physicaled like the way we did,” Dolphins coach Adam Gase declared after his team was throttled 38-7 by the Patriots Sunday at Gillette Stadium.

Read that how you will but it’s a clear shot across the bow that the Dolphins thought they could come into the house of the 9-time AFC East champs and punch them in the mouth and the Patriots wouldn’t punch back, or at least not as hard.

The talk all week out of Miami was about their team speed spread across a wide array of weapons. And the talk in New England was about a defense that just got owned at the line of scrimmage by the Lions.

Well, the Patriots defense didn’t just punch back, they pancaked the Dolphins offensive line all afternoon.

“We ignore the noise,” Trey Flowers said, repeating a long-held mantra in Foxboro. “When you’ve been hearing it for so long, we know we’re all we’ve got and we understand the guys in here and how hard we work. So we have confidence in how hard we work and the production that we’ll put out on the field.”

Excluding the final Dolphins drive of the game, the Patriots – on average – forced the Dolphins into 11.5 yards on on third down.

TOM BRADY: “What you say is important. What you do is more important.” Words to live by in #Patriots win pic.twitter.com/t5Aqufpxql

The Dolphins, known for their run-pass option offense, appeared to outsmart themselves and just try to pound the Patriots with a traditional straight ahead attack, apparently getting the feel that they could handle the Patriots front seven after what they saw on film last Sunday in Detroit.

They never got it going. The Patriots held the Dolphins to 97 yards and six first downs over the first three and a half quarters.

“We were searching. We tried to get the run game going a few different times in the game and they were doing a good job up front of shedding our blocks and making tackles around the line of scrimmage,” Dolphins quarterback Ryan Tannehill said. “I have to go look at the tape, I don’t know exactly what was happening but we weren’t able to get the run game going and that hurt.”

Hurt is exactly what the Patriots need to put on Miami. And the players who needed to put that hurt on are the leaders of the team.

“The credit goes to the players,” Belichick said. “We’ve got great leadership on our team. Like I said, everybody stepped up in all of the different phases. They went out there. They made the plays. They did it on the field today. They deserved to win. They deserved to win because of the way they performed, and so I’m fortunate that we have players like that that were able to take that challenge and respond the way they did on the practice field and the meeting room and then put it out on the field on Sunday. We have a group of hard-working, tough guys and they showed that today.”

Leadership on defense starts with Devin McCourty. What he saw on the first drive, even after the 17-yard Tannehill completion on the first snap, was an indication that the Patriots were ready to go for this one.

“It was just time for us to play as a team,” McCourty told me. “We (nearly) get a three-and-out – even though we only got three points but the offense being on the field, driving down, taking time off of the clock allows us to sit on the bench, talk about the first drive, what happened, what we need to do, what we expect and then we get back on the field, we get back off the field, they get.

“(Then) we get a turnover in their territory and we score right away. It allows you to not play great but to complement each other and take advantage of that where we go score before the half, we get the – all of those little things add up I think to playing good team football.”

The Patriots quarterback wasn’t exactly crisp to start the game. Tom Brady nearly got picked on the first drive – which ended in a stalled red zone drive and three points – and did get intercepted on the second possession. But the defense was so smothering, it allowed Brady to take his time introducing Josh Gordon to the offense while allowing Josh McDaniels to get Sony Michel and James White up to speed on the ground.

“They did a great job and I think they didn’t give up many third downs – maybe one or two,” Brady told me. “I mean, any time you play like that – I mean, we’ve been on the other end of that the last couple weeks where we didn’t do well on third down and we’re not out there and the other defense is out there, and I mean, that’s tough to play that way.

“But, they made some great plays when we needed it, too, and it was great to see them play that way. And, you’re right. Complementary football is what we’ve always tried to play here. You play smart, you get a lead, you play field position when you can and make the most of opportunities when you get them. That’s why we came out victorious.”

The defensive line welcomed back Trey Flowers from a concussion while Malcom Brown, Lawrence Guy, Dont’a (I’m not a defensive end) Hightower and Kyle Van Noy broke through the Miami offensive line on numerous occasions.

“Again, Miami’s got a lot of speed. They have a lot of weapons on the field. I thought our defensive players did a really good job of handling that and pursuing and trying to keep some of those fast guys to limit the space as much as possible.”

Sunday was about the Patriots getting their swagger back defensively and pushing back after getting pushed around a week ago in Detroit. The Patriots have home games against the Colts and Chiefs in the next two weeks, with a chance to build on the momentum from Sunday.

PATRIOT TOUGH: Bill Belichick “We have a group of hard working, tough guys and they showed that today.” #Patriots pic.twitter.com/dFQhFJGfW3

The Patriots were dominant in every single defensive category Sunday, holding Miami to 11 first downs, 172 yards overall and just 56 yards rushing on 18 attempts.

“This game, we just couldn’t get anything going,” Gase added. “We were getting pushed back, a lot of pressure on Ryan even though they weren’t pressuring with blitzes. So when you are getting pressured on three, four-man rushes that’s going to be an issue and that’s really what happened, we could not get anything going on offense and then it just kind of trickles down to the defense because now they’re on the field and we had a couple of chances to get off and we had some penalties and it just affects everybody.”

What’s next for Miami? They have the 3-1 Bengals in Cincinnati next week and suddenly their high-flying dreams of AFC East supremacy could be coming back to Earth with a thud. When the Patriots and Dolphins meet again on Dec. 9 in South Florida, we’ll see if Miami learned a lesson from Sunday or are just repeating old habits.