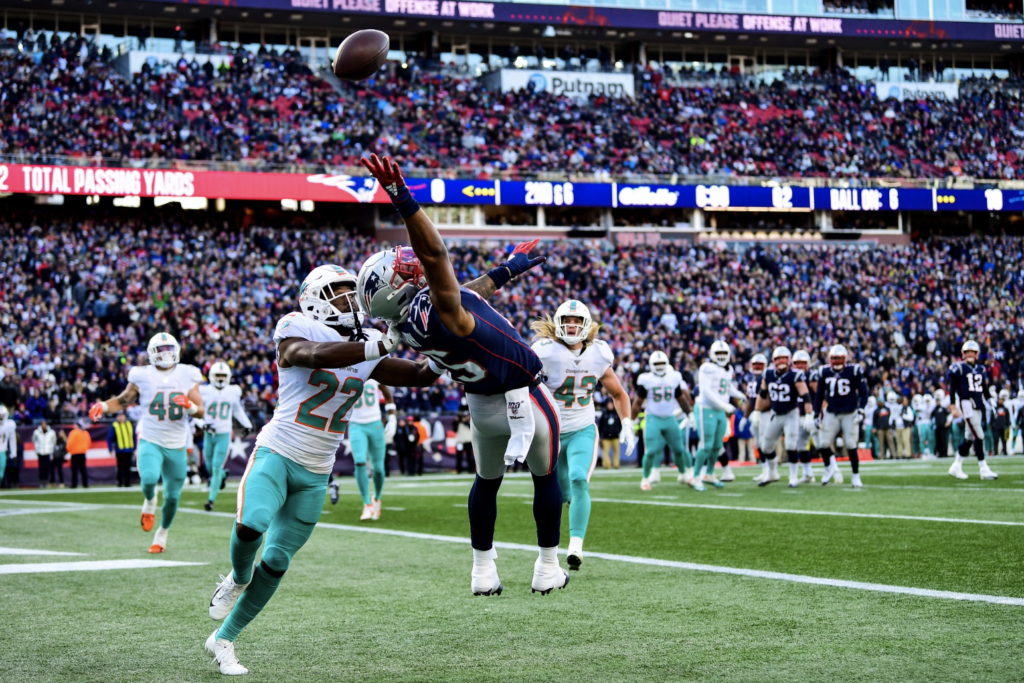 FOXBORO – Get ready for it.

The Patriots are done. Sunday’s game just proves that this group, which couldn’t beat a team at home that they blew out in Week 2 by a 43-0 score, doesn’t have what it takes to move on in the playoffs.

All the naysayers will be out in force this week after the Patriots gave them an excuse to throw dirt on the grave with a 27-24 collapse to the Dolphins Sunday at a stunned Gillette Stadium. As a result, the Patriots will play without a week of rest and take on old friend Mike Vrabel’s Tennessee Titans next week in Foxboro.

“Here in New England, we’ve been a little bit spoiled, having byes yearly but look, we’re blessed to be in the playoffs and we should be excited about that,” Matthew Slater said in the aftermath.

“We should look forward to our opportunity and try to seize the opportunity because look, the reality is there are guys on this team that may not see the playoffs again over the rest of their careers so we need to make this opportunity count and it starts by trying to have a good day (Monday) and trying to stack them together. And the next time we play, we need to play our best football.”

At the risk of reading too much into those words, some of those guys could include some of the leaders of the team, including a certain quarterback who re-wrote more of the NFL record book Sunday.

“Well, it was a great chance for us to not play next week,” said Tom Brady, who completed just 16 of 29 passes for 221 yards and two touchdowns. “So, we didn’t take advantage of it. We just didn’t play good enough and we all wish we would have done a better job. Certainly, I do.”

This feels like something different. This loss certainly has ominous overtones to it. The Patriots did things we just haven’t seen them do over this glorious 19-year run. They blew a lead late with the strength of their team on the field.

“We’ve got to dig deep this week, we’ve got to look ourselves in the mirror and get ready to go,” Devin McCourty said. “No one feels sorry for the Patriots not getting a first-round bye in the playoffs. It is what it is. We talk about it each year, each team has their own journey, and this is our journey to go out there next week, Wild Card weekend and have an opportunity to continue to play. If we want to earn the right to play next week, we’ve got to go out there and play well.”

“We’ve got to dig deep this week. We’ve got to look in the mirror and get ready to go. No one is going to feel sorry for the #Patriots not getting a first-round bye.” Devin McCourty #GoPats pic.twitter.com/rB5x6d7gNk

All season we’ve raved about the Patriots defense, in particular their secondary, being the deepest and most versatile in the game, led by a defensive player of the year candidate in Stephon Gilmore.

That defense allowed Ryan Fitzpatrick to march 75 yards in 13 plays in 3 minutes, 29 seconds. They looked conservative and a bit out of whack in how to approach the last minute of the first half, usually a Patriots staple in the Belichick era.

Brady got fooled and made a bad throw that former teammate Eric Rowe was only too happy to peel off of Julian Edelman and pick off for the easiest pick-6 he’ll ever score in the NFL.

The Patriots committed a crucial illegal procedure penalty in the fourth quarter to wipe out what would’ve been a first down screen pass to James White on third-and-11. Instead, the Patriots got backed up and eventually punted. So many momentum-killing mistakes on Sunday to keep track of and now not enough time.

Instead of a bye week where Bill Belichick and his staff can break down every single mistake and use it as a teaching moment, they’ve got to get ready for a do-or-die game at Gillette next weekend. No one saw this coming entering Sunday. No one.

Elandon Roberts, who caught a 38-yard touchdown pass from Tom Brady Sunday, was asked if he’s still optimistic and excited about the playoffs, despite Sunday.

“Why not? It’s an accomplishment. You’ve got guys that are packing up and going home. It is still a great accomplishment and stuff like that,” Roberts said. “We just have to get ready for next week. You come into the season working for the playoffs.

“Of course, you don’t want a loss going into it, but at the same time you have to respect it because there are teams week in and week out that come out here to beat you. We have teams coming at us and we are trying to win. So, you have to respect that part of it. Don’t get me wrong, it’s hard to make the playoffs in this league. We have been very blessed in our organization. It is a blessing to be in this position and we will just come back and work tomorrow.”

The point here is that as awful as Sunday was – and it was borderline inexcusable – the Patriots are not finished. Far from it, as Slater was happy to remind me after that remarkably stunning stinker Sunday. I asked Slater if the coaching staff will play a key role in re-focusing the team.

“Along those lines, the leadership here is very good, too. When we leave here today, this game is over with. We’ll put it behind us and focus on the next challenge. You can’t allow something like this to stick with you. You never like to lose a game. It is what it is. We need to look forward and embrace our opportunity and make sure we do everything in our power to a man to seize the opportunity we have and make the most of it.”

Did Slater learn anything – good or bad – about his team Sunday?

“Certainly, it is a different situation, but it is important for us to have the proper perspective. We have been very blessed to have the type of season we have had and being in the playoffs. A lot of teams don’t get that opportunity. Would it have been nice to have the bye? But now we don’t have one. We have to do everything in our power to recover and prepare and be excited about our opportunity. Let’s not mope around and feel sorry for ourselves, we are in the playoffs. Our team has worked hard, and we should be appreciative of where we are.”

Devin McCourty was also preaching truth to power afterward, pointing out that from one week to the next, things change, presumably with the suggestion that things could swing back to their favor starting with wild card weekend.

“You try to get ready to go each week, it doesn’t matter,” McCourty said. “I think other sports where you might be playing one night, then the next night, or two nights, each time we play there’s a whole week in between to prepare, to build it up, to get ready to go. If you don’t do those things – how we played last Saturday didn’t matter today. That was evident out there.”

The Patriots have made all sorts of history over this 19-year run of excellence. They could make more if they make it to Miami for Super Bowl LIV. The Patriots have never made it to the Super Bowl in the Belichick-Brady era from starting in the Wild Card Weekend. The closest they came was in 2006 when they ran out of gas at Indy in the second half in the AFC Championship.

“How we played this week doesn’t have to matter next week,” McCourty said. “If we go out here and practice well, execute and go play our best game of the year next week, it won’t matter, we won’t care about this week. It’s all about how you prepare, it’s all about being ready to go and then executing out there on Sunday.”

“I would say overall, we won some games here this season, we’ve done some good things and when we don’t, we lose. It’s that simple. I think we know that and it’s like anything else in life, it’s hard to go out there and execute each week but that’s the task at hand. That’s why we’re here, that’s why we get paid to play football, for that reason.”

The Patriots will have their blinders and noise-canceling headphones on this week. We’ll find out next week at Gillette Stadium if they worked.