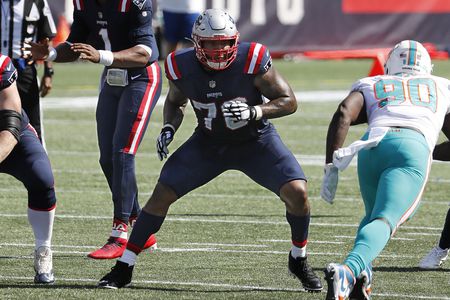 Patriots left tackle Isaiah Wynn was extremely durable in his four seasons at the University of Georgia.

The 2018 first-round pick only missed one game playing for the Bulldogs, starting in 40 of 41 contests after his freshman season, including the 2017 National Championship Game.

However, Wynn quickly ran into injury issues once he arrived in New England, beginning with a torn Achilles in his rookie preseason and then turf toe in his sophomore campaign. The Pats left tackle only appeared in nine games in his first two seasons, with two stints on injured reserve.

After starting the final nine games of the 2019 season, Wynn’s health is finally moving in a positive direction, and he’s starting to live up to his status as the 23rd overall pick in 2018.

“I would say this offseason,” was Wynn’s answer to a question about when he felt fully healthy after two seasons of injuries. “You know, like I said before, I just got a chance to focus on building up my strength and building up the places that I may have had injuries and just continue to build off that, so definitely this offseason.”

Full offseasons without rehabbing an injury are rare for an NFL player, but they are invaluable to improving a players’ physical conditioning and strength training for the upcoming season.

The 23-year-old packed on muscle during his time off to beef up a frame that’s on the smaller side for an NFL offensive linemen. At a shade under 6-foot-3 with 33 3/8-inch arms, Wynn was in the seventh percentile for height and the 40th percentile for arm length at the 2018 combine.

Those metrics are even lower when you look at NFL offensive tackles, where Wynn is one of the shortest tackles to ever measure in at the combine since 2003 with very few comparables.

Wynn has yet to allow a quarterback pressure in pass protection on 72 pass-blocking snaps through two games as the only tackle with a clean sheet in the league (min. 50% of snaps).

“Isaiah is a good player, does a lot of things well. He’s a very athletic player with very good playing strength and leverage. He’s got good feet, and he’s a smart kid, and he really takes well to coaching and making adjustments and those kinds of things,” Belichick said this week.

As one would expect, the greatest coach of all-time was spot-on with his scouting report of Wynn, whose foot speed, balance, and hand usage allow him to mirror pass rushers with ease.

Due to his smaller stature, Wynn is an extremely aggressive pass-protector that doesn’t sit back and wait for defenders to come to him as a bigger tackle would.

Here, Wynn uses a jump set off play-action to get into Seahawks edge rusher LJ Collier’s space right away. Then, he’s able to keep his feet moving and with good balance to run the arc with Collier, but it’s the hand-fighting that’s next-level. When Collier throws his inside hand, Wynn quickly slaps it off and keeps his feet moving in the process. Every time Collier goes to engage his chest, Wynn’s active hands get in the way. Collier can’t get around the edge because of Wynn’s foot speed and hand usage.

Another standout aspect of Wynn’s game in pass protection is his ability to bend, leverage, and use his immense grip strength to stall pass rushers. On the play above, Wynn is jump-setting again, and on his second step, he fires his hands inside Collier’s chest and completely stalls any momentum the Seahawks pass rusher has coming off the ball. Once Wynn gets a hold of a defender, the rep is over.

Lastly, Wynn’s awareness in pass protection to pick up stunting defensive linemen or other blitzes is superb, especially working in tandem with left guard Joe Thuney on line stunts.

Patriots head coach Bill Belichick brought up the chemistry between the left side of the New England offensive line during his press conference on Wednesday.

“He and Joe [Thuney] have played together now. They have a good feel for each other there and work together well on a lot of different combinations and adjustments and things like that they have to make. Those two guys really help each other. They’re both good players, and they help each other as well,” he said.

On Wednesday, Wynn explained to CLNS Media his approach to picking up schemed pressures by the defense alongside Thuney, who has only allowed one hurry in the first two games.

“Some teams give it away. Some teams don’t. So, kind of just react off instinct and relying on technique. You know, that’s always big because you can’t really get beat if your technique is good,” Wynn said.

As a run blocker, Wynn’s ability to leverage blocks, use his upper-body power and footwork make him a sound positional run blocker. Although he isn’t as polished in this regard, talk of struggles in that area are overblown.

On this play, he does an excellent job of hooking the defensive end and sustaining his block to seal the edge. However, fullback Jakob Johnson can’t execute his kick-out block with enough force to create a hole for Michel, who is too slow to weave and turn the corner on his own.

The Pats left tackle got lost on New England’s failed speed-option play on a fourth-quarter third-down attempt (he should block Adams), and was on the left side that caved in on the games’ final play. Still, he was far from bad as a run blocker last week and was solid in Week 1.

The next frontier for Wynn will be proving that he can continue play at a high-level against top competition, with Miami and Seattle making up two of the thinnest defensive lines in football.

This week, Wynn has a matchup with another first-round pick trying to live up to his draft status in Raiders edge rusher Clelin Ferrell. Ferrell, the fourth overall pick in 2019, could give Wynn some issues with his length, but that’s a very winnable matchup.

How Wynn handles Ferrell, who has a distinct height and length advantage, will show those who still doubt his ability to play tackle due to his height limitations that he can handle all types of edge rushers.

Raiders sub-rusher Maxx Crosby, a fourth-round steal by Mayock and Gruden, could also line up over Wynn in passing situations and has some serious get-off at times.

Still, with three consecutive weeks of mediocre competition, Wynn could pitch another shutout in pass protection in Sunday’s game against Las Vegas at Gillette Stadium.

The Patriots went outside the box when they drafted an undersized offensive lineman to be their left tackle of the future following Nate Solder’s departure after seven seasons with the team.

Although it took some patience, Wynn is finally rounding into first-round pick form and could end up as one of the best tackles in the 2018 class.