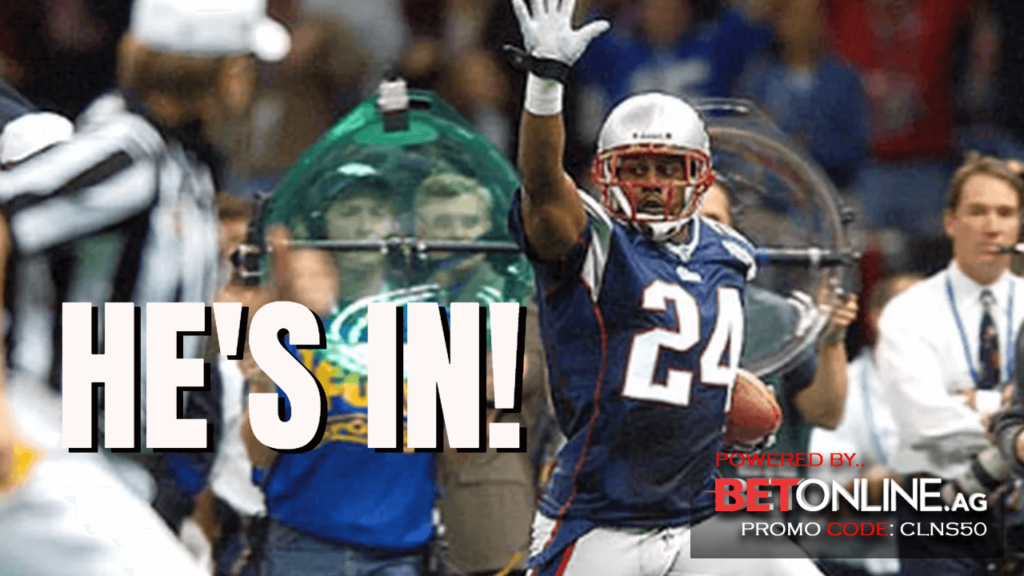 ATLANTA — Ty Law is finally where he belongs. The Pro Football Hall of fame.

He is the first member of the Patriots original Dynasty to be elected to the Hall but certainly won’t be the last.

Fellow Patriot Richard Seymour – who also played on all 3 of the Patriots Dynasty 1.0 teams – did not get elected in this his first season of eligibility.

Law played for the Pats from 1995 to 2004 and was arguably the best or one of the 2 or 3 best lock down corners of his generation.

His signature moment in Super Bowl 36 when he picked off Rams QB Kurt Warner and took it to the house. The play swung the momentum of the game the Rams had been dominating territorially but were unable to break through thanks to Law and a stifling, physical Patriots defense. The Patriots of course ended up winning the game 20-17 on a last minute Adam Vinatieri field goal.

The cornerback had 53 career interceptions, and holds the distinction as the player who intercepted Peyton Manning more times than any man alive.

Ty Law: "This is a special start to the weekend…hopefully we can bring number 6 home to New England" #Patriots

As far as Seymour goes, he did not get in but the belief around most football insiders is that Big Sey will get there in time.

Seymour spent the first eight seasons of his NFL career in New England after being selected by the Pats 6th overall in the 2001 NFL draft.

Considered a controversial pick at the time (see Terrell, David) Seymour went on to win 3 Super Bowls with the Patriots and earn 5 Pro-Bowl berths. Earlier this week Bill Belichick wrote a letter to the hall of fame committee in support of Seymour (and Law.)

It read in part…

Richard Seymour and Vince Wilfork are the two best defensive linemen I have coached. Richard had a rare combination of size, speed, strength and athleticism. He was a smart player who understood game plans and adjustments on the field. His length, strength and quickness allowed him to match up on any offensive lineman favorably. Although primarily a defensive end in our 3-4 defense, Richard also played nose tackle. In the four-man line, Richard could play defensive end or defensive tackle depending on the situation and desired matchups.

His physical and mental versatility, as well as his ability to master multiple techniques, made him dominant as an inside or outside player. As an example of his skills as a complete football player, Richard was a force on field goal blocks for us and, early in his career played on the punt return unit. Richard was effective versus the run and pass from a variety of alignments. It is extremely uncommon to see a player of his size, at any position, be capable of doing so many things so well. In addition, Richard was a well-conditioned athlete with the Patriots and he had the stamina to compete for an entire 60 minute game.

Richard Seymour was unquestionably one of our key players and I do not believe we would have won three championships without him.