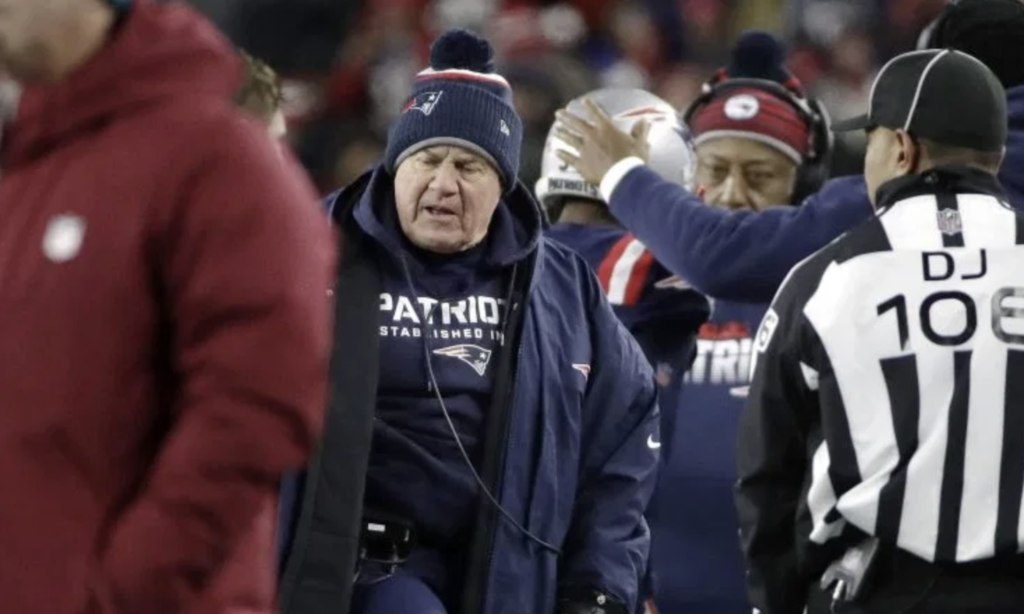 FOXBORO — Sunday’s Patriots Chiefs game had a little bit of everything. Unfortunately , it didn’t include a comeback from 23-7 hole.

The day began with the Chiefs scrambling to get 35 equipment bags from Newark, New Jersey to Gillette Stadium in time. It ended with the NFL left to explain the miscues of the Jerome Boger crew officiating the game.

Tom Brady had the chance to tie the game, thanks to a 17-yard run on 4th-and-6 and the Kansas City 29. But on 4th-and-3 from the KC 3, Brady’s pass for Edelman was knocked away by Bashaud Breeland as the Patriots lost, 23-16, before a disgusted crowd at Gillette Stadium. New England falls to 10-3 and have lost to all three other AFC Division Leaders. They maintain a one-game lead on Buffalo in the AFC East.

With the offense struggling badly to put points on the board to open their last four games, Patriots use gimmickry to strike first.

A flea flicker from James White to Tom Brady to Julian Edelman, who had gotten behind the Chiefs secondary for a 37-yard touchdown put the Patriots up, 7-0. The Patriots were greatly aided by a pair of defensive pass interference calls on third down on the drive, including a 31-yarder by Charvarius Ward on Phillip Dorsett at the Chiefs 37.

J.C. Jackson undercut the route of Demarcus Robinson and picked off Mahomes at the Kansas City 40. But the Patriots offense stalled and lost one yard in three snaps and had to punt. From there the Chiefs took control.

The Chiefs responded with a 48-yard Harrison Butker field goal that made it 7-3. The Chiefs had 3rd-and-2 from the Patriots 30 but Mahomes threw an ill-advised pass on a slant route that fell incomplete.

The Chiefs took over the game in the second quarter. They took advantage of the Patriots’ inability to move the ball, poor passing from Tom Brady and – for the second straight week – New England’s inability to cover a receiver out of the backfield. Even the questionable kicking game factored into the rare Patriots home field struggle.

Nick Folk converted his first kick, the extra point following the Edelman touchdown but had his 41-yard field goal late in the first quarter blocked. That blocked kick led to Kansas City’s first touchdown drive of the game. That block likely factored into the Patriots going for it on 4th-and-7 at the KC 27, a pass that fell incomplete for Edelman.

The Chiefs took a 10-7 lead when second-round pick Mecole Hardman beat Jonathan Jones and got behind safety Duron Harmon for a 48-yard touchdown pass from Mahomes.

On New England’s next possession, Brady under threw Matt LaCosse and Bashaud Breeland undercut the route for an interception at New England’s 35. Seven plays later, Travis Kelce took the direct snap from a wishbone look and ran it in from four yards for the touchdown and a 17-7 lead.

Kansas City made it 20-7 when Harrison Butker drilled a 31-yard field goal with 62 seconds left in the first half. The Patriots got a break when Dorian O’Daniel was called for unnecessary roughness on the ensuing kickoff, putting New England and Brady at their own 41. But the Patriots could do nothing with it and were booed off the field heading into the locker room trailing, 20-7.

The Chiefs took the opening drive of the second half and drove 52 yards in 6:14, capped by a 41-yard field goal from Harrison Butker, making it 23-7. The Patriots went 3-and-out on their first possession of the third quarter and appeared dead in the water.

But as has been the case all season, they used their special teams and defense to turn the tide.

But after the Patriots stopped the Chiefs, Nate Ebner sprung right up the middle and blocked Dustin Colquitt’s punt from the KC 35, a team-record fourth of the season. The ball went out of bounds at the KC 19. Two plays later, Brandon Bolden took the handoff on a jet sweep and ran it in from 10 yards to cut the KC lead to 10, 23-13.

Next up was the Patriots defense, specifically Devin McCourty. The Patriots captain forced a fumble on Travis Kelce catch in Patriots territory. Stephon Gilmore picked up the ball and was headed for the end zone but the play was whistled dead by Jerome Boger’s crew. The play was ruled down by contact and whistled dead. The Patriots got the ball but were robbed of the six points. They would drive to the Kansas City 15. Brady hit N’Keal Harry for a pass in the flat. Harry would dive for the end zone and the pylon. Harry was ruled out at the 2. Replays showed that Harry clearly kept his left foot in bounds and it should’ve been a touchdown. But since Belichick used both challenges and lost his first one, he didn’t have a third to overturn the call.

Refs said this was out of bounds and took away a TD. Between this and the fumble, Belichick going to have this entire officiating crew fired after this game #Patriots #Chiefs pic.twitter.com/mXBW61pns1

The Patriots settled for a 29-yard Folk field goal that made it 23-16, as Boger’s crew was serenaded with a “Refs You Suck” chant.

The Patriots figure to get back in the win column with a game next Sunday at Cincinnati’s Paul Brown Stadium against the 1-12 Bengals. But with the way the offense is playing, nothing can be taken for granted at this point.