Patriots Mailbag: Allowing Tom Brady’s Departure to Ruin his Pats Legacy Would be Biggest Gut-Punch of All 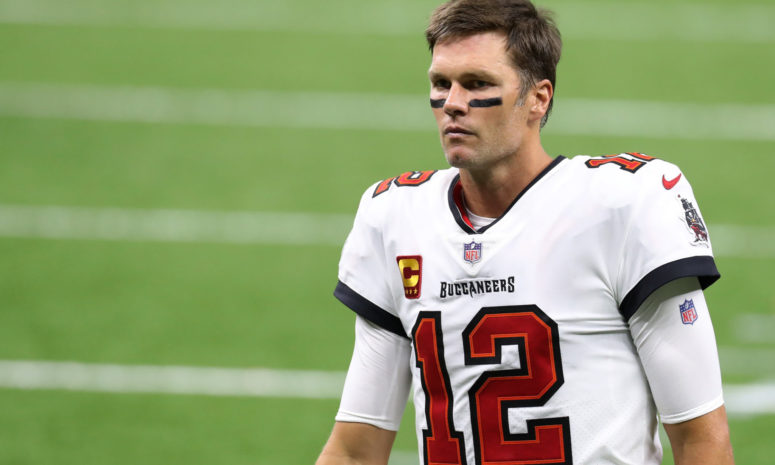 If you’re one of those fans angry at Bill Belichick and Robert Kraft for letting the greatest player in NFL history walk, then your anger is justifiable; it never should’ve gotten to this point.

However, whether you are team Belichick, or team Brady, the sting of watching Brady finish his career in Tampa Bay is one you’ll have to live with as a fan. But the worst sting of all would be if the departure ruins the dynasty. And for that matter, this is a message to the coach and quarterback.

From the Brady camp, the seven-time Super Bowl champ grew tired of the grind in New England. But the biggest reasons that Brady left the Patriots were twofold: New England no longer had the offensive personnel to compete at the highest of levels (since 2019), and Brady didn’t feel he was offered the long-term security he sought contractually.

In Belichick’s view, the team did what it could to surround Brady with better weapons, but those personnel moves fell flat (Antonio Brown, N’Keal Harry, etc.). In the summer of 2019, the Pats offered Brady a two-year, $50 million contract extension that wasn’t fully guaranteed in the second season because they too wanted to protect themselves from Brady falling off the cliff.

Eventually, Brady would drop off, right? Wrong. Belichick made a mistake trying to protect the team.

In hindsight, Belichick and the Patriots should’ve given Brady whatever he wanted to remain in New England, but not even Belichick could’ve predicted he’d play this well at age 43 and 44.

Plus, who knows if Brady would have returned to peak performance in a depleted Pats offense.

Regardless, the outside noise about hatred and bitterness over the divorce is hopefully media fodder because the absolute worst thing Brady and Belichick could do is let how it ended ruin six Super Bowl championships and two decades of dominance.

When Brady retires, and he’ll eventually retire, both player and team should want him to come back in Foxboro immediately for a jersey retirement, Pats Hall of Fame induction, statues, and more.

Just because it ended with Brady playing for the Bucs, what would hurt the most for all Patriots fans is if Brady announces his retirement in Tampa Bay and takes a while to return to Gillette Stadium.

If the only people that truly matter, Brady and Belichick, let this linger into Brady’s post-playing career, then that is worse than watching Brady finish his career elsewhere.

The Patriots had an unprecedented run that will never be replicated in the NFL; don’t make Brady’s lasting legacy in New England about his departure rather than six banners.

Without further ado, let’s empty the Patriots mailbag for Week 4 of the NFL season:

Do you think there’s a lack of innovation on the part of the patriots offensive that is holding the team back, or is it more so that they aren’t giving Mac all of the playbook yet? It seems like they’ve ran some very vanilla schemes so far offensively.

The Pats run a very sophisticated offensive system that takes a high level of execution. The problem is that they are integrating a rookie quarterback, new offensive weapons and don’t necessarily have the talent they used to in some places. In short, their scheme works when Tom Brady, who had years of experience in the offense, is running it. Other systems are far more quarterback-friendly and build in ways to make things easier on their playmakers (motion, play-action/option reads, misdirection, etc.). The thinking game slows a lot of playmakers down.

For example, the Patriots missed a deep touchdown to Nelson Agholor last week because the quarterback and receiver saw the defenders’ leverage differently. Agholor has a leverage read: inside leverage, break on the corner while outside leverage is a post. The corner starts inside him, so he breaks out, but it’s cover-zero (no deep safety). Jones throws it in the vacated deep middle, but Agholor runs the corner route.

The system’s advantages are obvious; the options allow receivers to convert routes away from coverage (example: running a corner route instead of running into a post safety). But it could take years of repetition and players with a high football IQ to master. Plus, the college game isn’t played this way, nor is most of the NFL, so it’s unique to this offense, making it hard for newly acquired players to adjust. I’ve been reluctant to go down the “too complicated” path, but I’m heading in that direction. Other teams are playing fast and in space, but the Pats aren’t because everyone is overthinking. Plus, they’re forcing Mac into the Brady offense rather than building a new offense around his strengths. It might be time for an overhaul as the college and pro game move in a different direction.

Do you think Belichick was resting Trent Brown and Uche last week to be ready for the Brady Bowl?

If the Patriots were holding back anything to beat Brady, that’s incredibly obtuse, and I just can’t see Belichick doing that. Having a game-plan wrinkle ready for Brady on defense is one thing, that’s just Belichick, but holding back entire packages and such is a step too far. Offensively, a piece of me hopes that McDaniels is holding back until they build some chemistry. If this is the offense they plan on running all season, it could be a long year.

How does this offense adjust without the aid of James White. Will this open up JJ to be more dion Lewis type role? Thought we would have used him more in the game plan regardless of the injury

My guess is we’ll see a few more weeks of Brandon Bolden (I know, sigh). He’s the most reliable player in pass protection and used to bring more juice as a receiver. Maybe mix in a little J.J. Taylor to give him an opportunity. But Taylor will need to prove himself in blitz pickup at practice first. I’m still in love with my 02 personnel package: Agholor, Meyers, Bourne, Henry, Smith. Those are your five-best playmakers in the passing game on offense. Why not put all five on the field? Smith can serve as a backfield threat and blocker or just go empty. Get your best five in the game.

Will Nkeal Harry get playing time this week?

The most-asked question of the week was, will N’Keal Harry play, and what will his role be this season? Although I’m wary of hyping up Harry again, there are two areas he can help: in the red zone as a big target on back shoulders, high point fades, box-out situations, etc. And the Harry we saw in training camp was more explosive off the line and decisive with his route running. He also built chemistry with Mac (14-of-18 targeting Harry). If that Harry shows up, he presents more of a vertical threat than Kendrick Bourne and Jakobi Meyers, who could give Nelson Agholor some help creating big plays downfield. Still, Harry needs to prove it to us on the game field this time around.

We have two amazing tight ends, and yet we might be the worst team in the red zone through 3 games. Kicking field goals alone won’t win too many NFL games.

The tight ends need to get more involved in every area of the offense, period; red zone, between the 20s, running game, all of it. With that said, one message resonating around Gillette Stadium this week is that the team is stalling in the high red zone. Tight ends are great targets down by the goal line, but the team isn’t getting into the low red zone often enough to utilize Hunter Henry and Jonnu Smith. Only five out of the Pats’ 31 offensive drives ended inside the ten-yard line in the first three games, and they scored touchdowns on four out of five. They’re scoring inside the ten but aren’t getting down there enough.

Can you put your finger on how Jakobi Meyers continues his touchdown-less streak? Is it a symptom of playcalling? The way he's been covered in the red zone? Something he's doing that needs to be improved?

Really good question, and something we’d need to study closely for a complete answer. But his role in the offense typically doesn’t lend itself to scoring many touchdowns (Edelman’s career-high was seven in 2015). There isn’t a ton of opportunity there, which is a big part of it. As far as Meyers doing something wrong, I wouldn’t say I’ve noticed a significant flaw in his route-running in scoring areas.

Any news on Jamie Collins?

There’s nothing new on the Jamie Collins front. A source told CLNS Media that the Patriots were one of the teams that called the Lions about Collins when they were fielding trade offers, but the Pats make those calls all the time to do their due diligence. Collins is prioritizing fit in his search for a new team, though, and there’s no better fit than New England. I still think this one has real legs.

Who do you think is our best player on defense this season?

It’s close between J.C. Jackson and Matt Judon. Judon has fit right in as a pass-rusher and sets the edge. Just an all-around great football player in the Patriots’ system. If he’s your guy, no disagreement here. Jackson, for the most part, is playing well and is going to earn a huge contract. I would give the nod to Jackson because he is holding together a secondary sans Stephon Gilmore at a pretty high level. Honorable mention: Deatrich Wise. A smaller role for Wise than the other two, but he’s pressuring the QB and making plays against the run.

Should the Pats have been in for CJ Henderson at that price considering Gilmore and Jackson’s impending FA?

I haven’t watched much of Henderson in the NFL, but he was a fluid press-man corner in college that fit the prototype from that standpoint. His flaws at Florida were tackling and playing the ball in the air with his back to the quarterback. Henderson wasn’t a willing tackler at Florida and had some really bad whiffs at outside corner. My guess is they didn’t see him as a fit here for those reasons. The talent grab would’ve been potentially worth it, but the Pats aren’t in the business of acquiring corners who can’t or don’t want to tackle.

Am I right to say that drafting a corner in the first round right now looks like the early best move for New England in the 2022 draft? I'm in the "draft the best player available" camp, but I also realize that the long term CB situation for New England could end up being dicey.

As much as I hate looking ahead to the 2022 NFL Draft, there is sound reasoning that cornerback is a top need. Stephon Gilmore and J.C. Jackson are in contract years, and although we expect one of them to return in 2022 (probably Jackson), they need more at corner. Still, Mac Jones is your quarterback, and the pass protection needs to significantly improve for a pocket-style passer to succeed in New England. My top need is offensive tackle, by far. Isaiah Wynn will play on the fifth-year option next season, Trent Brown is a free agent, and both have durability issues. Plus, Wynn’s performance isn’t good right now. Draft a franchise left tackle to protect Jones for the next decade.