Football Outsiders gives the Patriots a 39.9% chance to make the playoffs. 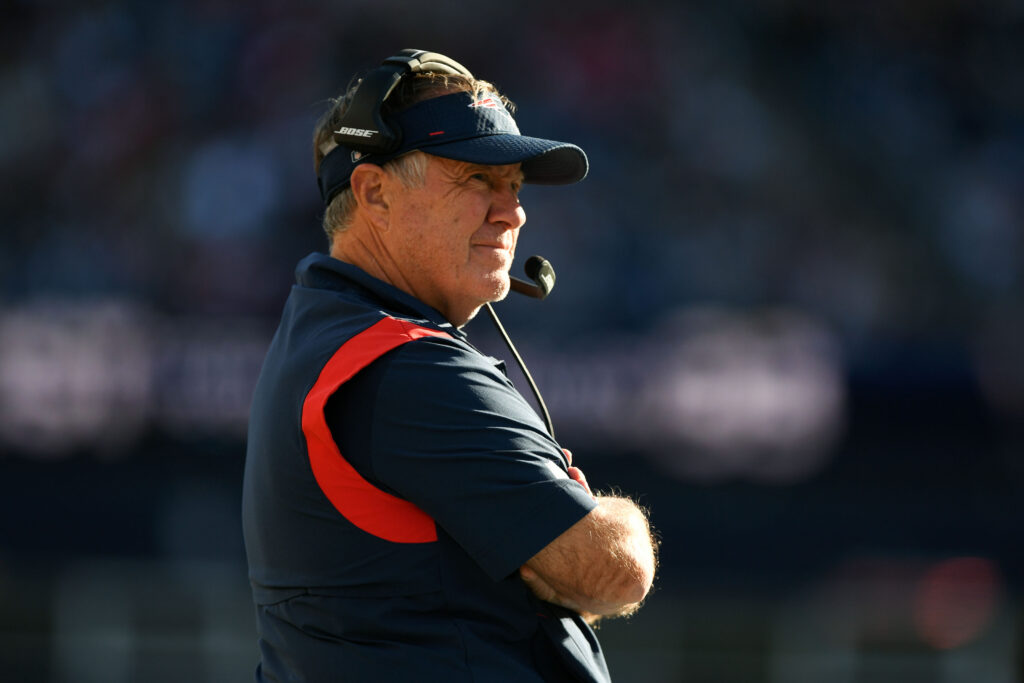 The Patriots are entering a stretch in their schedule that will be the tipping point in their season.

New England (3-4) is on the outside looking in currently in the AFC playoff picture, but Football Outsiders gives the Patriots a 39.9% chance to make the playoffs. With their three wins against the Jets (twice) and Texans, nearly 40% odds is pretty optimistic.

The reason that Football Outsiders gives the Patriots a puncher’s chance at making the postseason has nothing to do with Bill Belichick’s reputation. Instead, it’s that the Pats have the 11th-easiest remaining strength of schedule.

Only two of New England’s last ten opponents rank in the top 14 in Football Outsiders’s DVOA metric, and they’ll face three of the worst teams in the NFL in Jacksonville (28th), Miami (29th), and Atlanta (31st). With both matchups against the Bills looming, Buffalo is weighing down their remaining strength of schedule.

If New England can ride the positive wave from last week’s blowout win over the Jets to upset the impressive Los Angeles Chargers (4-2) this week, they have matchups before Thanksgiving against two banged-up teams in Carolina and Cleveland (at home), then draw the Falcons (3-3).

The post-Thanksgiving schedule starts tough with the Titans (home) and a showdown with the division-leading Bills in Buffalo on a Monday night. But three out of their last four are against the Colts, Jaguars, and Dolphins, with their bye week coming in Week 14.

On the one hand, the Patriots aren’t in a position to take any opponent lightly, and they’ll need to win at least seven of their last ten games to have a chance at a postseason berth.

But the path exists because there are several winnable games in the back-half of their schedule, especially with the way things are trending.

For a rebuilding Patriots team that was right there with the Bucs and Cowboys, rattling off wins down the stretch isn’t out of the question.

Although we wouldn’t dare compare the two teams since one had Hall of Fame talent on its defense, just for fun, the 2001 Patriots’ record after seven games? You guessed it, 3-4, with the Pats winning 11 of their last 12 en route to a Super Bowl title.

Still, it all can start or end with this weekend’s trip to Los Angeles. The Chargers have a new defensive mastermind as their head coach in Brandon Staley, pairing him with one of the league’s best young quarterbacks in Justin Herbert.

Yes, there’s a chance for the Patriots to make a run, but it needs to start now on the heels of their 54-13 beatdown of the Jets in Week 7.

Despit the speculation out there, do you anticipate any moves ahead of the trade deadline?

As fun as it would be, I’m not anticipating any fireworks at the deadline. The Patriots have $2 million in cap space, per @Patscap, and will need to move money around to free up room for a major acquisition. The only move we could see happening is a player-for-player swap using N’Keal Harry or Chase Winovich as a trade chip. Although we don’t see them trading Winovich at this time, he’s an interesting name to monitor in trade discussions moving forward. Never say never with Belichick. And if the Pats beat the Chargers, buying a piece for a playoff push would be on the table. But it’s not trending in that direction right now.

What would you spend on a potential Brandin Cooks trade?

To be clear, I’m not reporting that the Patriots are interested in a Brandin Cooks reunion. However, he’s the rare combination of affordable ($1.9M cap hit) and productive. The Pats would need to redo Cooks’ salary in 2022, but they can figure that out later. The deal for Cooks becomes even more doable if the Pats trade a player for Cooks to keep their cap in shape for the rest of the 2021 season. Cooks is worth a day two pick, but the price tag might be lower if he asks out of Houston. In that scenario, would the Texans do N’Keal Harry and a fourth-rounder for Cooks? Adding Cooks to Agholor, Bourne, and Meyers would give the Pats two legit field-stretchers. Agholor and Cooks aren’t in Randy Moss’s stratosphere. But the last time they had that kind of speed was Moss and Donte Stallworth.

If the team loses to the Chargers, with a 3-5 record we should be sellers. Who could be a trade chip? Any big name player you would move (Mason, Judon, etc.) to get back a haul?

I understand the sentiment here but can tell you that the Patriots will not sell anyone at the deadline. It’s also important to remember that guys with hefty cap numbers don’t typically get moved because teams don’t have a ton of cap space in-season. The Pats are looking to build a contender during Mac’s rookie contract, and selling off their best veteran players (like Judon or Mason) doesn’t fit into that plan. It’ll be interesting to see how Belichick handles Devin McCourty and Dont’a Hightower in the offseason, two free agents on the decline. But we’ll cross that bridge when we get to it.

Possible wade gets elevated into slot corner to keep mills on the outside? He was in the slot when he had his best season at OU.

First and foremost, anyone pretending that Wade will be the savior of the Patriots’ secondary needs to stop. He’s a rookie with inconsistent tape last season at Ohio State and in the preseason with Baltimore. With that said, the Pats need bodies, and Wade has upside. I’ve always thought he was better suited as a big nickel rather than an outside guy. Could he earn a role in the slot with Jon Jones done for the year or even bump Jalen Mills inside as a boundary corner? Sure, it’s possible. But I’m not holding my breath.

When Trent Brown is healthy, where does he play? Teddy K has been great for the oline and Owenwu is a great RT

Brown was eligible to return to practice this week, and the Patriots didn’t start his clock for a return off injured reserve. At this point, the best course of action is to assume that Brown isn’t returning this season. In a way, the team might be better off building their continuity with the starting five we saw against the Jets rather than re-shuffling again once Brown returns. He could return, then get hurt again, and the roller coaster on the O-Line continues. The Patriots found something with Wynn (LT), Karras (LG), Andrews (C), Mason (RG), and Onwenu (RT). Stay the course.

Why does the Pats Fanbase hate Isiah Wynn so much? The injuries are not his fault and he had a stretch of bad play but every "expert" (PFF, Brandon Thorn, Geoff Schwartz etc.) seem to hold him in high regard.

When a player gets injured as often as Wynn and struggles for a month-and-a-half, fans will sour on the player. That’s how it goes. His upper-body power and technique are always impressive when he’s on his game. Plus, he answered the call last week to play a more physical brand of football. Wynn is an undersized tackle, so he needs to be more aggressive and go get his guy. He did that more against the Jets, and the results speak for themselves. Wynn is a good player who got a little too passive. But, when he’s playing up to his potential, Wynn is the best healthy left tackle on the roster, and it isn’t close.

Is it just me or has Collins not been out there as much as anticipated. Could this be due to linebacker depth or the fact that Dugger/Phillips play that hybrid type role to add the speed that our linebackers lack?

Collins was up to 25% of the defensive snaps last week against the Jets. The Pats seem to like the group they’re using on early downs, opening a role for Collins in their third-down package. His ability to play in coverage and blitz the quarterback fit well in a situational role. With Judon, Hightower, Bentley, and Van Noy already in the mix, it’s not a major surprise that Collins isn’t playing more. It looks like he’s here for passing downs and depth.

I have seen people like Greg bedard say dugger has struggled in coverage in some games but according to the film I watched he only had one bad game against the Texans does the tape tell you the same thing?because I think he has been really good so far.

Dugger is allowing a 72.7 completion rate into his coverage, and his ability to stay glued to receivers through the break point isn’t good enough. There are times where he’s more competitive than his rookie season in man, but Dugger looks far more comfortable as a zone defender than he does in straight man coverage. His two interceptions are on a bracket call and as a deep safety. At 6-2, 220 pounds, converting Dugger to a box safety and tight end stopper makes sense. But his ideal role might be at free safety or as a robber in man or short zone defender. Based on his skill set, he’d thrive with more freedom and less man coverage responsibilities.

Are you concerned about the production of Josh Uche in his sophomore year? He seemed to be a player you and Alex were incredibly high on from the preseason.

The only explanation for Uche’s drop-off is a back injury that held him out of the Saints’ loss in Week 3. In the first two games, Uche had three sacks and seven QB pressures. He has zero sacks and three QB pressures in four games since the injury while still playing the same amount of snaps. I’m a big believer in Uche’s talent. But this is what he’d do at Michigan, too. Just when you thought he would take off, he’d get hurt and lose all momentum.

What are your thoughts on Kendrick Bourne so far? BB has taken some deserved criticism for some of the moves at WR in the past but Bourne seems to be making plays each week.

I’m a huge Bourne fan. He’s a hard worker who brings good energy and holds himself accountable. Plus, he has good quickness and better-than-expected explosiveness. Bourne is taking advantage of the 1-on-1 opportunities he’s getting with Agholor attracting help over the top and the tight ends drawing middle of the field coverage. Bourne is a good complimentary piece and a great teammate. There’s something to be said for that, even if he’s not a star.

Who is the player that is surprising you the most? And what player do you think is flying under the radar of everyone?

My answer is the same to both questions: Deatrich Wise. I was surprised when the Patriots signed Wise to a four-year, $22 million deal this offseason. I was wrong. He has rounded out into a solid weak-side defensive end who is still a factor as a pass-rusher. His run defense has come a long way, and although he’s still not the guy you want taking on double-teams at the point of attack, he’ll defeat single blocks and win on the backside. Wise is solid.