Patriots Mailbag: How Close Were the Pats to Landing Odell Beckham Jr?

The Pats were one of six teams that seriously pursued the free-agent wide receiver. 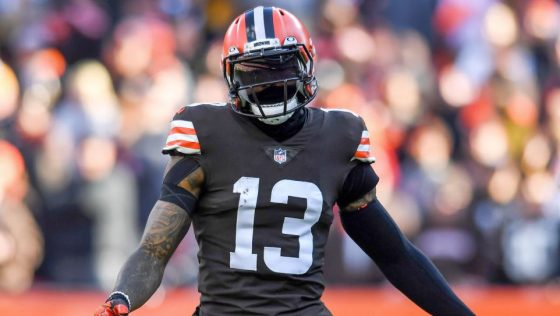 The Patriots were one of six teams that seriously pursued new Los Angeles Rams wide receiver Odell Beckham Jr. but was the star wideout interested in coming to New England?

According to a source close to Beckham, the new LA Rams star was eying the Rams before he landed with the Browns via trade in 2019 and a stealth players-led courting by Jalen Ramsey and others got it done.

The Pats hoped that mutual respect between Beckham and Belichick and taking the mantle as the top weapon in New England’s offense would attract the former Giants and Browns star.

However, the Patriots’ conversations with Beckham never went past the preliminary stages. Although the Pats were one of six teams that seriously pursued the free-agent wideout, Beckham narrowed his focus to the Packers before the Rams jumped in late, his preferred destination all along.

The harsh truth is that the Patriots are still a rebuilding team in Beckham’s and most around the league’s eyes without an established star quarterback like Aaron Rodgers or Matthew Stafford. Not that it’s a major surprise to anyone, it’s obvious, but this was as clear a signal as any.

For Beckham, the sticking point was that the Pats are too far away from Super Bowl contention. A source in Beckham’s camp said that the star wideout is impressed by rookie quarterback Mac Jones, but Odell isn’t in a place in his career where he wants to wait for a young QB to develop.

For New England, they’re still an offseason or two away from attracting a receiver of Beckham’s caliber to play with Mac. Sure, they could acquire one by trade, but that’ll come next offseason at the earliest.

A recent example of a viable blueprint for the Pats was when their divisional rivals in Buffalo traded a haul for All-Pro wide receiver Stefon Diggs following Josh Allen’s second NFL season.

At that point, the Bills were sold on Allen as their franchise quarterback and made moves to position themselves to be a “Diggs away” from being a real contender to come out of the AFC.

Although Buffalo lost in the AFC Championship Game a year ago, and it feels like the Pats and Jones are ahead of the Bills’ rebuild timeline with Allen, that is a more likely path to landing a star receiver.

Let’s empty the mailbag as we head into Week 10 of the NFL season:

With Trent Brown coming back, how do you see things unfolding on the line? In theory he should make an already improving line that much more efficient?

If we weren’t on OBJ watch, I would’ve led with Trent Brown’s return to practice and what it means for the offensive line. From this perspective, it’s the biggest decision facing the team moving forward: do you roll with the current group that’s playing well or go for the higher ceiling?

According to PFF, the current starting five are all grading out as above-average at their positions. Since making the switch with Karras at left guard and Onwenu at right tackle, the Pats are second in the NFL pass-blocking efficiency and have allowed the second-fewest pressures as an offensive line (14). Plus, the entire group is above-average at run blocking.

If Brown is healthy, my gut tells me that the Patriots will return to their original starting five that practiced together all summer. But I’d prioritize continuity and roll with the hot hands. Brown is a great player when he’s healthy and motivated. But you cannot count on the former (he has been hurt on and off since leaving the Pats after the 2018 season), and you risk losing all momentum by shaking things up again.

How long did it take you to shave your beard?

Do you expect the Patriots to activate Trent Brown and/or Chase Winovich for the Browns game?

Love the three-parter, Miguel: 1. The beard trim was necessary because my sister got married last weekend, and I officiated the wedding (congrats to Mr. and Mrs. Putney), so I had to look my best. I’m not ashamed to say my barber did most of the work for the big occasion. 2. My senses on Trent Brown have been off for a while as the situation took some unexpected turns. Although this week seems lofty in my eyes, there’s internal optimism that Brown will be activated. 3. Winovich, from what I’m told, is healthy. His availability will come down to if they need him in the game plan. Based on the fact that he didn’t practice for the padded session on Wednesday, I lean towards no this week.

Do you feel that Mac Jones has "plateaued" or "hit the rookie wall"now that he has played about as much football as he did last year in college?

The thought that Mac could be hitting a “rookie wall” has crossed my mind, as has the idea that teams now have tape on him to game plan against the Pats’ passing attack (see Gilmore on Meyers). But a two-week slump isn’t enough to call it a trend, especially considering the level of competition. Mac’s slump is more related to Carolina (fourth) and the Chargers (ninth) being two of the best pass defenses in football, per DVOA. Although the Browns have a great pass rush, they’re 19th in pass DVOA this season, while Atlanta is 28th. If Mac struggles over the next two games, we can talk about rookie walls.

Are people not open deep or is Mac Jones not throwing deep? How come there are so few 20+ completions. Fields did it 3x on last two drives.

At this point, it’s all about improving efficiency for Jones on the deep ball. Mac’s 33 deep attempts (20-plus yards) are tied for 16th among 35 qualified quarterbacks with Baker Mayfield and Ben Roethlisberger. At the same time, he has more than Trevor Lawrence (30), Justin Herbert (29), Kirk Cousins (29), Ryan Tannehill (26), and Matt Ryan (24). In other words, volume is not the problem. The issue is more on the fact that Jones has only hit on 11-of-33 deep balls, or 33.3%, which ranks 26th out of 35. Jones’s efficiency on deep passes takes a hit from Nelson Agholor being the lone deep threat on the team. He was a good go-ball or fade thrower at Alabama, but his pass-catchers were superior on the outside. There were a few instances where Agholor had a step, and Mac either put too much air under it or wasn’t on the same page with Agholor regarding how he was finishing his route. Building up timing and chemistry with Agholor will also help. In short, there is a multitude of factors. But it’s not a volume or want-to issue now—more just margin for error and fine-tuning things.

Has the play of both Judon and Barmore factored in to our recent success playing more zone more than the actual DB’s? Are we seeing 4 man pressures working more because of the int pressure ability of Barmore and the outside rush by Judon therefore allowing us to drop an extra DB?

Yes, I believe this is a big reason why the Patriots’ shift to zone coverage is working. They’re flooding the backend with seven in coverage while still getting home with four, making it difficult for quarterbacks to find open receivers downfield. According to Pro Football Focus, the Pats rank sixth in pressure rate on four-man rushes this season (37.4%). We’ll see if that continues against better offensive lines, but it’s working for now, and having a second rusher with a high win rate in Barmore alongside Judon gives the Pats two weapons to scheme one-on-ones.

A certain bald radio host predicted godchaux will be cut this off-season, do you have any opinion on this? I’ve been impressed with his play this year

Speaking to Godchaux this week, I found it interesting that he lit up with a smile when I brought up the Pats’ 3-4 base front with him at defensive end. The reason it was interesting was that my eye test tells me that Godchaux is better in Belichick’s system as a 3-4 defensive end rather than a true nose tackle. From there, he can play as either a three, four, or five-technique and use his upper-body power to defeat single blocks and the occasional double team. Godchaux might not have the size to hold up in a two-gapping scheme as a nose tackle. Do I think he gets cut? No. But I think they’ll need to find a more natural fit for the nose. Godchaux feels like he’s more Lawrence Guy than Vince Wilfork.

Did we overpay for Jonnu? 50 million for a guy who cant seem to get open? How did he get all those catches and yards in Tennessee? Has he forgotten how to run routes once he came here?

The best we’ve seen Jonnu look in a Patriots uniform was in the first half against the Jets in Week 7 (besides training camp). For the Pats to get the most return on their investment, they need to use Smith like a chess piece from various alignments and manufacture touches to get their athletic tight end in space. In other words, he’s not a route runner that’s going to create downfield opportunities on his own. If McDaniels keeps scheming up ways to get Jonnu the ball, he’ll produce. If not, and it’s fair to say that you can’t spend the entire game manufacturing touches for one player, then the Pats’ return on investment won’t look good. They need to find a way to make Smith viable even when he doesn’t touch the ball as a blocker and a threat to clear out space.

Jarrett Stidham is the Pats backup quarterback on the field against the Browns right?

Belichick chalked activating Stidham up to, “depth at that position is always important.” It’s hard to believe that Stidham, who had back surgery in late July and hasn’t practiced since until recently, would be ready to backup Mac or start if Jones were unavailable in the future. Plus, the team did everything it could to avoid starting Stidham last season, even after they were eliminated from playoff contention late in the year. Why would they turn to Stidham now after months without practicing? This feels like an “in case of emergency” move.

Is there an offensive scheme that you expected to see more of or at all that the patriots haven’t unleashed yet?

At this point, it’s unlikely that the Patriots are hiding half the offense in McDaniels’s back pocket, but they’re always good for a few wrinkles. We’ll continue to pound the table for more RPOs in the game plan, but as McDaniels told us weeks ago, “we don’t major in [RPOs].” The other wrinkle we are waiting for is 02 personnel with Jonnu Smith as the primary backfield player (Agholor, Meyers, Bourne/Harry, Henry, Smith). Although Bolden and Rhamondre are coming along as pass-catchers, that still feels like the Pats’ most-dangerous passing game package. Maybe some more no-huddle/tempo? Again, we aren’t reinventing the wheel here this late in the season.