The Patriots' head coach has earned the benefit of the doubt for now. 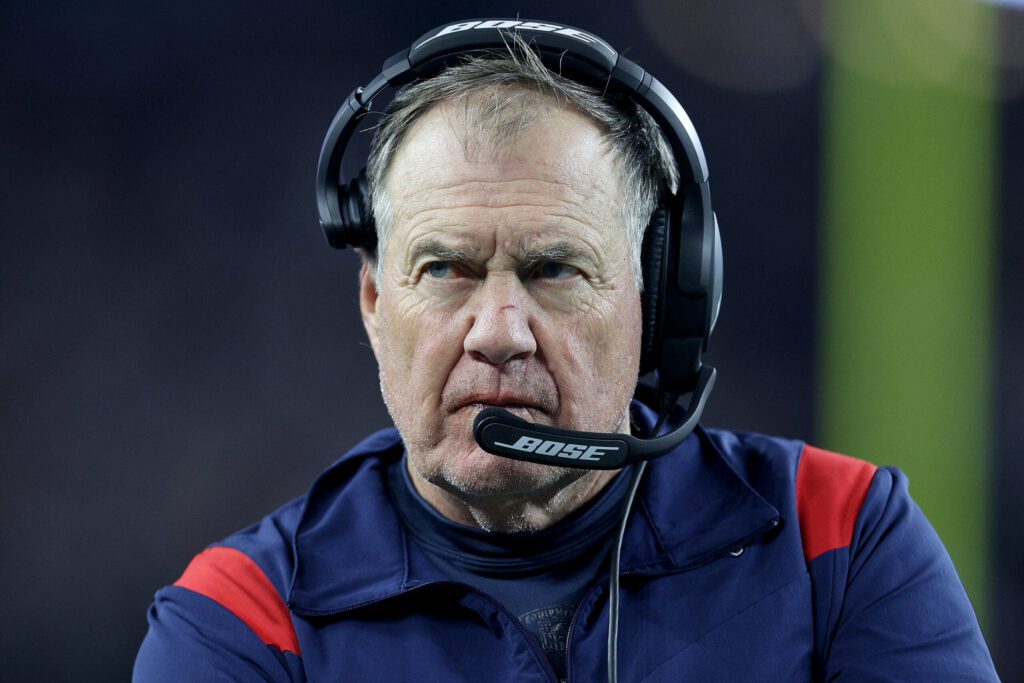 There are two types of reactions to criticizing Patriots head coach Bill Belichick, who, for many, is the greatest coach of all time and certainly knows more about football than anyone.

Belichick loyalists will point to the six rings and two additional Super Bowl titles as a defensive coordinator, say none of us have a right to question the great one and call it a day.

Then, there’s a group that’s starting to see the chinks in the armor and are asking a fair question: how long of a leash does Belichick have to turn things around in New England? A two-year window? Five years? Eventually, the Pats need to start winning again.

There’s no truth to any claims that the game is passing Belichick by from an X’s and O’s standpoint. His offensive and defensive systems are still sound, the Hoodie still comes with solid plans against high-powered offenses, and the Patriots were mostly competitive in the first six weeks of the season because of Belichick in that sense.

Plus, the Bill the GM stuff is beginning to turn itself around a bit after a horrible stretch of personnel moves. The Pats’ drafts from 2016-2019 were awful outside of a few expectations (RB Damien Harris, P Jake Bailey), which led to the talent shortage in 2019-20.

And although some of Belichick’s free-agent signings this offseason aren’t panning out yet, Matthew Judon and Hunter Henry look like great fits. Nelson Agholor, Jalen Mills, and Kendrick Bourne can play their roles, and it’s still early enough for Jonnu Smith to find his niche in the offense.

On a macro-level, Belichick has the ship pointed in the right direction.

However, the Patriots’ 2-4 record results from things happening on a micro-level or during games where we see uncharacteristic mistakes (penalties, turnovers, play-calling).

Belichick’s teams used to pride themselves on playing turnover and penalty-free football while feasting on opponents’ mistakes with game management. Now, the tables are turning.

This week, we wrote about Belichick’s ultra-conservative approach to fourth-down decisions and the offense in general, which is undoubtedly hurting the teams’ chances to put up points.

There have also been questionable play calls on both sides of the ball, such as conservative calls by offensive coordinator Josh McDaniels in the red zone and an oddly aggressive call by defensive play-caller Steve Belichick on a late third-and-25 last week against Dallas.

If the Pats are figuring things out in the personnel department and Belichick isn’t losing it as a schemer, the wins will start coming back to New England sooner than later if Belichick’s coaching staff adapts.

How good can they be in the post-Brady era? That’ll be up to Belichick completing the personnel puzzle and Mac Jones’s development.

But to go back to the original question, Belichick’s leash should be miles long. Not because of past performance, but because there will never be a better alternative.

New England’s best bet for future success is counting on Belichick to make adjustments to his in-game approach as the roster improves.

Without further ado, let’s empty the Patriots mailbag for Week 7:

What factors are impacting how Jonnu Smith is being used?

My biggest gripe with the Patriots’ offense at this point is Jonnu’s role. Essentially, the Pats are turning a player they paid $31.25 million guaranteed into a blocking tight end. Jonnu only runs a pass route on 38% of his snaps, while he has only run a pass route on 30.5% of the Pats’ passing plays over the last two games. There are two things at play here:

1. Mac Jones only has 50 drop-backs out of 12 personnel, or 22.5% of the Patriots’ passing plays. The Pats are throwing the ball mostly out of 11-personnel, and in that package, Hunter Henry is the lone tight end on the field because he’s a better receiver than Smith.

2. Pats offensive coordinator Josh McDaniels needs to do a better job of scheming touches for Jonnu. Screens, throws behind the line of scrimmage, crossers, rub routes, and other avenues to get him free for catch-and-run opportunities.

When the Patriots signed Henry and Smith, they probably figured they’d throw out of 12-personnel more often. Even if they’re going with what works out of 11, Smith is a talented ball carrier who can create explosive plays after the catch. McDaniels needs to use him more effectively in the passing game. Jonnu isn’t a traditional tight end.

Is there anybody around the league who you would consider going for as a trade target heading towards the deadline in a few weeks?

The Patriots don’t have a ton of cap space ($4.12 million per @PatsCap) for an in-season blockbuster trade unless they’re sending someone out in the deal. I still wholeheartedly believe the Pats are a body short at running back, even if Rhamondre Stevenson keeps trending upward, so someone like Rex Burkhead or Marlon Mack would make sense. They could also make a move for a veteran tackle like Ty Nsekhe, a backup in Dallas but has starter-level tape in his career (and is cheap). To make a real splash, like an Odell Beckham or Brandin Cooks deal, the Pats would need to move a substantial salary (Hightower, McCourty), which they won’t do. It won’t surprise me if N’Keal Harry is moved at the deadline. Maybe a player-for-player swap there.

Is the linebackers inability to cover tight ends hindering the secondary?

My least favorite narrative about the Patriots, “their linebackers are too slow!” It drives me nuts because it fails to understand New England’s defensive scheme, and the numbers do not back it up. Instead of rostering undersized “athletic” linebackers who struggle against the run and are worse in coverage than big safeties, the Pats deploy hybrid DBs like Kyle Dugger and Adrian Phillips to handle tight ends and high-stress coverage responsibilities. Then, they use big linebackers like Hightower and Bentley to plug gaps against the run and rush the passer. This season’s results speak for themselves: ninth in run defense DVOA, tenth against tight ends, fourth in defending passes over the middle of the field, and the best play-action defense in the NFL (6.0 yards per attempt). The linebackers aren’t a problem. It’s a non-issue. In fact, Belichick is a trend-setter with the hybrid/$-backer role (see: Patrick Chung).

Mac showed vs. Dallas he is a quick & accurate passer at all depths. Still, NE passing game is hurt by drops. Especially frustrating when off the hands of receivers (eg off Bourne for pick 6, or Agholor on OT drive). Is there hope this improves weekly as QB->WR "rhythm" develops?

The Patriots have been great with drops this season. Out of 32 qualified quarterbacks, Mac Jones ranks seventh-best in drop rate (4.5%), and the Pats only have seven drops on 211 pass attempts. Still, the Bourne/pick-six and Agholor drop in overtime were killers. Bourne took responsibility for running the wrong route on the pick-six by saying he ran a one-step slant when the call was for a three-step slant, which is why Mac’s pass was a little too far in front of Bourne. Agholor also answered honestly about his drop, saying, “I’m mad about that one. I think part of me got a little too eager.” Agholor said he was already thinking ahead to running after the catch rather than securing the catch. Those two plays were untimely miscues, but drops aren’t a major issue for this offense.

How does Oline compare with rest of the league on total pressures, hits and sacks?

Good question because context is important. Here are New England’s offensive line’s ranks in sacks, QB hits, pressures, and pass-blocking efficiency, according to PFF. Keep in mind, these are pressures allowed solely on the offensive line, and the most important metric is “efficiency,” which ranks quarterback pressures on a per drop-back basis. Honestly, they’re better here than you may think: 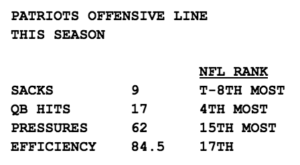 Other than getting back to full strength what is the solution to this horrid offensive line play?

From my time talking to and observing Dante Scarnecchia, continuity is the biggest key to success along the offensive line. Scar used to say he’d take lesser talent on the O-Line if he has all five linemen healthy at practice every week. With offensive line play, you need everyone in sync and seeing things through the same lens. That’s not easy to do when guys are in and out of the lineup. Even if it means settling on lesser talented players, the Pats need to find a healthy five-man combination and stick to it.

Any idea on what happened to Uche? He was being majorly hyped in preseason (I know preseason) but has been silent for most of the season. Is he hurt? Just surpassed on the depth chart with bringing in KVN and Collins?

Uche had three sacks and seven QB pressures in the Patriots’ first two games. Then, a back injury threw his season off the rails. In his last three games since the injury, Uche only has one hurry in 46 pass-rush snaps. One has to think the back is still an issue. He’s playing the same percentage of snaps in a situational pass-rusher role as before the injury. It’s vital for New England’s defense that Uche’s arrow points upward again. With him and Judon firing at all cylinders, the Pats’ pass-rush was legit.

Would you like to see Bill give more chances to the younger guy's at some point instead of going to the old guard all the time Evan. If they're gonna lose at least let the younger players get more playing time which will help them for the coming years.

Outside of Rhamondre Stevenson and Josh Uche, I’m not sure who else this would apply to here. The Patriots have a lot of young guys playing significant roles, and Stevenson’s role in the offense is growing. Mac is starting, Mike Onwenu is starting, Kyle Dugger is playing 83.6% of the defensive snaps, Christian Barmore is at 52.3%. I suppose they could roll with Yodny Cajuste and Justin Herron at tackle or Joejuan Willians and Myles Bryant in the secondary. But, for the most part, the younger players worthy of being out there are out there.

Do we need to start thinking about life after Devin McCourty. He seems to have lost a step.

I’ve been clamoring for them to look for DMac’s successor for a few years now. McCourty knows retirement is inching closer, maybe even after this season when he becomes a free agent again. It would be great to have him mentor his eventual replacement on his way out. Unfortunately, the Pats haven’t addressed the free safety position in the draft. Whether it’s due to retirement or a drop-off in performance, McCourty is at the end here.