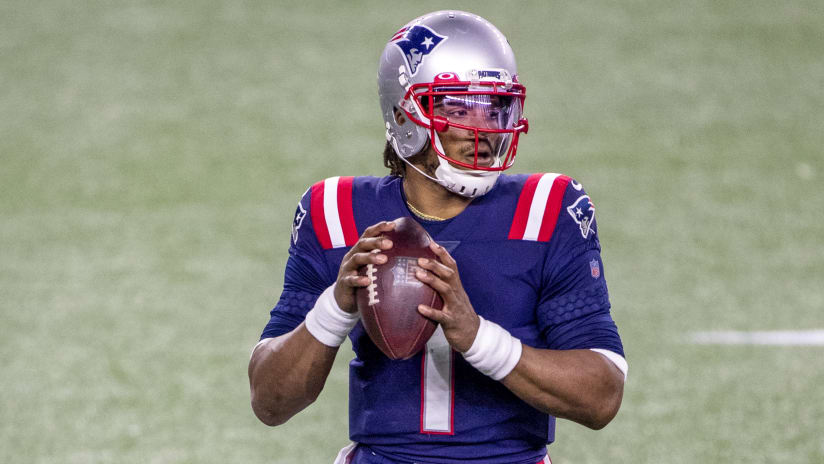 The Patriots re-signing quarterback Cam Newton to a one-year deal heavy on incentives should come as a surprise to absolutely nobody in the New England area.

Back in February, we reported that the door was very much ajar for a Newton return and then proceeded to explain why Cam returning was the most likely outcome, and we weren’t alone.

New England didn’t see any better options on the open market. The free-agent crop was weak. The trade market was either too pricey (Stafford) or currently stagnant, with the 49ers telling teams that called, including the Pats, that Jimmy Garoppolo isn’t currently available.

Although Newton’s return is a source of frustration for many fans, the Patriots wanted to have some semblance of a starting quarterback before free agency opens on March 17.

With their eyes on free-agent pass-catchers, Bill Belichick knew he could be the highest bidder but wouldn’t get anywhere with Jarrett Stidham and a “wait and see” approach at quarterback.

Now that Newton is back as a one-year bridge, the only move for the Patriots is to draft a quarterback in the first round; hitching your wagon to Cam beyond 2021 shouldn’t be an option.

Unless the Patriots somehow find themselves in on Deshaun Watson or Russell Wilson, which is extremely unlikely, the long-term solution and upside will only present itself in the draft.

There’s no sense in making a move for Garoppolo at that point, or a Gardner Minshew type, when there are five legitimate first-round quarterback prospects that can be eased in behind Newton.

Decided to cue up some Trey Lance tape because why not? And he already hit me right in the feels throwing a far-hash slot out with anticipation. #Patriots pic.twitter.com/5a09BeQJkH

Top national scout Matt Groh was in attendance for North Dakota State’s Trey Lance’s Pro Day on Friday, and Lance would make the most schematic sense as a pairing with Newton.

Lance is a natural thrower with a smooth delivery, a balanced and footwork-sound lower half, and operates well both under-center and from the shotgun or pistol. As a runner, he’s electric and would allow the Patriots to continue in the direction of the quarterback contributing in the running game as Newton did last season behind a massive offensive line.

There are some experience and accuracy question marks with Lance, but those two things go hand-in-hand; with more reps, his mechanics will become more consistent, and so will his accuracy. Lance is not a passer with an unorthodox or broken throwing motion.

Alabama loves to run the “dino” concept or double posts when they get single-high. Here, the deep safety runs with the inside post, and Jones throws a well-timed deep ball to the outside receiver to beat the safety trying to recover. Timing, ball placement. pic.twitter.com/wyVaLKbOWt

If the Pats want a timing and rhythm-based passing game as they were under Tom Brady, the other logical choice is Alabama’s Mac Jones. Jones won’t “wow” you with arm talent and athleticism like Lance, but he’s a quick processor with Brady-like qualities from the pocket.

Whether it’s Lance, Jones, or another first-rounder that the Pats trade up for in April’s draft, they committed to building a bridge with Newton and now need to hold up the other end of the bargain by adding a rookie.

As always, thanks to everyone that asked a question this week. Let’s empty the mailbag:

Although he would be far from my first choice, I think the most likely free-agent wide receiver for the Patriots is JuJu Smith-Schuster. Smith-Schuster is a “big” slot that plays primarily on the inside for the Steelers. There’s some inside-outside versatility, but he’s really an inside guy due to his lack of long speed; I’d rather see more explosive options that can play on the outside regularly. The reason why he’s the most likely choice is that JuJu’s market is going to be lukewarm, and he’ll likely settle for a one-year deal in hopes of resetting his value. The Patriots get their wide receiver with a 1,400-yard season on his resume, and JuJu gets to be the go-to guy in New England as a contract showcase. Smith-Schuster could still return to the Steelers under similar circumstances, but if he doesn’t, I could see both the Pats and JuJu recognizing that they don’t have better options.

I was shocked by the report from NFL Network that teams were calling the Patriots about Harry. The Pats shopping Harry seems far more likely, but Mike Garafolo is a pro, so his info could be accurate. After floating the idea around to gauge Harry’s market, it seems like there isn’t much there. Maybe a fifth-round pick or pick swap situation. To me, the Pats and Harry might be better off parting ways. Harry has the physical tools as a downfield jump-ball threat to produce more than he has, but that isn’t a great fit in the Pats offense. Moving on for New England would force them to find a better system fit at the “X” receiver spot, which is probably the nudge they need. The Pats can’t keep expecting to get first-round production out of Harry.

Assume the top free agent skill positions are unattainable due to the price tag required to compensate for a lack of QB, what is a roster of 2nd or 3rd tier players you could see realistically happening?

At that point, the two mid-level free-agent wide receivers that I would target would be Tim Patrick and Nelson Agholor. Patrick is a restricted free agent, which makes things more complicated, but he’s an ascending receiver in the league that’s still only 27 years old. With Agholor, he has produced both in the slot and out wide, where he played for the Raiders last season. Patrick (X) and Agholor (Z) would fit nicely together and bring big-play ability. Patrick, in particular, is someone that I’m enamored with for the Pats. His size, ability to run the vertical route tree on the outside, and contested-catch skills are exactly what the doctor ordered. Patrick has developed into the player they were hoping they’d get out of Harry.

Which defensive lineman will the Patriots sign that could be the next Lawrence Guy? They got annihilated in the running game last year

My free-agent watch list on defense got buried by the Cam news on Friday, but you can read the full list here. In short, the two defensive linemen I would target for New England are Denver’s Shelby Harris, and in the lower tiers, Titans DT DeQuan Jones. Jones is your typical signing for the Pats as a system fit that doesn’t do anything sexy but is 6-4, 320 pounds, and can play the techniques they want (two gaps). If they want to make a splash, Harris is a versatile and disruptive force that blew up the game last season when Denver beat the Pats on the road. Harris would undoubtedly be an upgrade, as would Jones, so either would be smart moves for New England.

Do the comp picks the Pats just received make it any more likely they trade up in the draft?

The new comp formula resulted in the Patriots losing out on a second fourth-round pick for Jamie Collins’s departure. I don’t think that matters too much when it comes to trading up in the first round, but I would’ve assumed that the Pats would try to package two of their fourth-rounders to move back into the top 100. Now that they only have two, instead of three, that move might be harder. Still, I think there’s a significant enough difference between the player you get at 139 versus the player you’d get at the end of the third round. If it were me, I’d take the two fourths and flip them for a third. Belichick did just that last year to move up for Dalton Keene.

If we were to trade back to late first round what is a realistic return? Obviously that pick plus….a late 2nd/early 3rd?

The best way to compute draft trades is to look at the trade value chart. According to Rich Hill’s model, the 15th overall pick holds a value of 1,050 points. The Pats could conceivably pick up a day two pick or two by moving back into the 20s. However, it depends on who the target is for the team trading up at 15. If the Patriots decide Mac Jones isn’t their guy, and he’s still on the board, quarterback trade-ups have more value. If a team is trading up to draft a linebacker, it will not be the same return. A trade-back scenario where the Patriots still land an impact defensive player, such as Tulsa’s Zaven Collins, makes a lot of sense if they aren’t sold on the quarterbacks.

I would 100 percent be on board with Bateman for the Patriots. He’s a silky smooth route-runner with explosive big-play ability and wins at all three levels of the defense. Bateman runs snappy routes that create separation and takes a technical approach that, combined with his physical tools, makes him an excellent fit for the Patriots. However, I do think 15 is a bit high. If they want to trade back into Justin Jefferson range (no. 22 in 2020), then the pick makes all the sense in the world. Although, it’s tough to imagine Belichick taking another first-round receiver after selecting Harry in 2019.

Will Julian Edelman be on the Patriots week one roster this year?

Although it feels like I’m trending towards the minority with this take, I think Julian Edelman is on the Patriots’ roster next season. Will he be healthy enough to play? That’s a different story. Edelman’s leadership and knowledge of the program can help new arrivals immensely in the wide receiver room. In my mind, that trumps his value on the field at this point. If he can give you anything production-wise, all the better, but the organization’s best move is to keep Edelman around as a mentor. Hopefully, he can contribute too.

It seems like Pats media has been quick to write off Rohrwasser as a bust. Seems like he didn't do great in camp/preseason and then was on practice squad for the year. Not like he choked repeatedly in real games. Is that eval premature?

The kicker situation for the Patriots is a sneaky underrated storyline. The Pats currently have Rohrwasser and draft bust Roberto Aguayo rostered with Nick Folk set to be a free agent. My understanding was that Folk and the team would orchestrate a return for the veteran, but that still hasn’t happened. As for Rohrwasser, I think it’s difficult for most of us to get the images from last year’s training camp out of our minds. He was shanking kicks left and right. Although Rohrwasser has the leg, his accuracy was horrid. It’s difficult to imagine him going from what we saw in camp a year ago to a consistent NFL kicker, but crazier things have happened. I wouldn’t rule out drafting another kicker.