Patriots Mailbag: Should the Pats Offense Have a More Aggressive Play-Calling Approach? 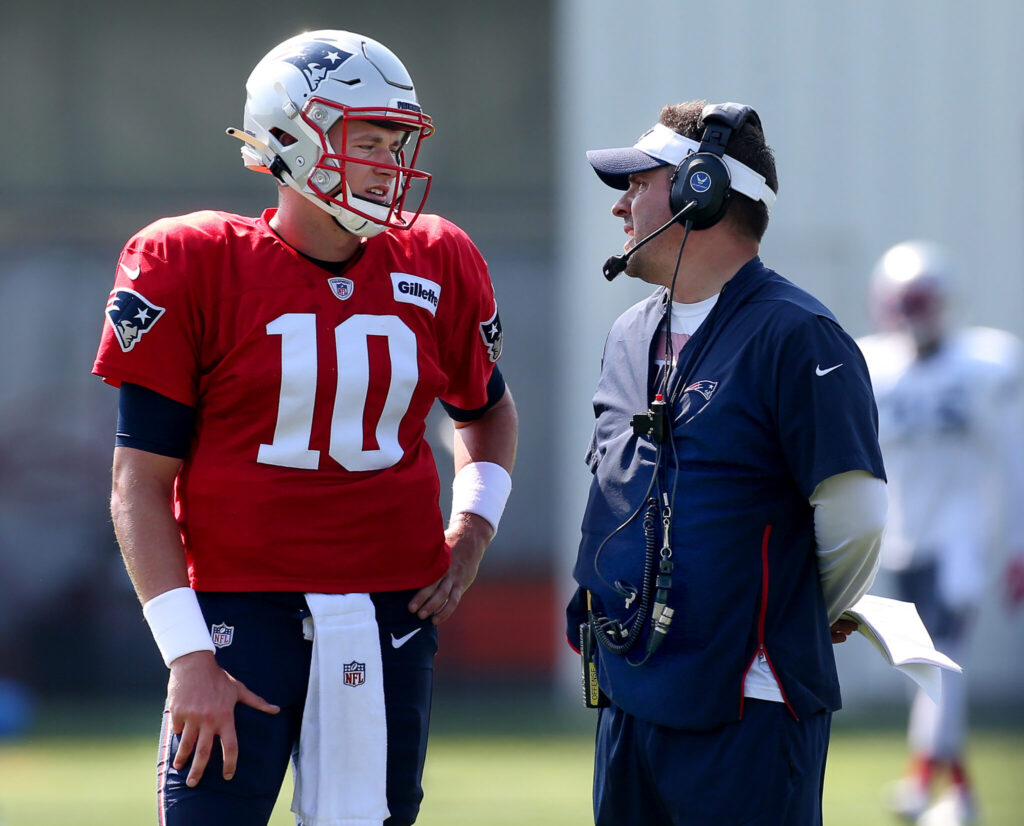 The Patriots’ conservative game plan in their season-opener against the Miami Dolphins defense made sense due to several factors.

First, and foremost, Brian Flores’s defense features one of the best secondaries in the NFL with two top corners, Xavien Howard and Byron Jones, patrolling the deep part of the field. Plus, Flores blitzed Jones 21 times, applying pressure on 35% of Mac’s drop-backs with nine QB hits.

And secondly, opening up the downfield passing game in a rookie quarterback’s first start against a good defense who was blitzing him on over half of his attempts was dangerous.

Pats offensive coordinator Josh McDaniels’s approach nearly worked. It got New England’s offense into the red zone four times, twice in the fourth quarter, but we all know the end result.

The second-guessing of McDaniels’s play-calling came with roughly 11 minutes to go in the final frame. Jones was on a run of completing eight of his last nine throws for 65 yards on the drive. With the Pats scrimmaging from Miami’s 21-yard line down 17-13, McDaniels called two-straight rushes to Damien Harris, gaining six yards and then a roll-out, one-read pass on third down.

The Patriots were content beating Miami 19-17, with two field goals to end the game, which was clear based on McDaniels’s red-zone play-calling in the fourth quarter.

Again, you can understand the plan, but tightening up late in the red zone and avoiding Jones attacking the end zone through the air at least once cost them the game.

Damien Harris’s fumble isn’t the offensive coordinator’s fault. But 27 rush attempts on first and second down with a success rate of 33% put the Patriots in 16 third-down situations and forced them to string together long drives (9.1 plays per drive, most in Week 1).

The Pats converted 11-of-16 third down, which is great, but New England’s offense either needs to run the ball better on early-downs or, preferably, call the game to produce more explosive plays.

Living in third-down is asking for the results they got in Week 1. Remember, the league average is to convert less than 50% of third-down attempts, and you run into land mines offensively when you need to string together long drives.

What is a land mine? Damien Harris’s fumble or Meyers’s drop are land mines. The more plays you run per drive, the higher likelihood of a negative play that takes points off the board.

#Jets HC Robert Saleh or analytical wizard? At today’s presser he went DEEP on their studies of #NFL offenses + what the ‘kill zone’ is & the balance of explosives vs dink & dunk #Patriots attack: #NEvsNYJ #TakeFlight #ForeverNE pic.twitter.com/tSh7FzwHLP

On Friday, Jets head coach Robert Saleh discussed the “kill zone” and why his defense focuses on taking away explosive plays. Essentially, this speaks to the genesis of the Seattle-3 coverage system that Saleh now runs in New York.

According to Saleh, the Jets’ analytics team says that one explosive play dramatically increases the likelihood that the offense will come away with points. Two explosive plays on a drive almost guarantee a touchdown.

The Patriots should’ve won against the Dolphins. They out-gained Miami and out-played Miami but beat themselves with turnovers, costly penalties, and untimely execution mishaps; in other words, unforced errors exacerbated by running long drives.

All of those things are fixable, but McDaniels needs to buy into his rookie quarterback fully.

Let’s empty our Patriots mailbag from Week 2 of the NFL season:

Who gets the start at RT?

Based on practice, newcomer Yasir Durant will get the nod at right tackle if Trent Brown can’t play. The Patriots are playing the long game here. Brown’s injury isn’t a long-term issue, so they’re keeping Mike Onwenu at left guard, where he’ll be the remainder of the season. If Brown was going to miss serious time, we might see Onwenu kick outside to right tackle and Ted Karras at left guard. For now, the focus is on developing Onwenu at guard and improving his chemistry with Isaiah Wynn and David Andrews. Durant didn’t allow a quarterback pressure in 13 pass-blocking snaps against the Dolphins in Week 1. He wasn’t a game-changer like Brown but did his job. We may see him split time with Justin Herron as well.

Even assuming a return by Trent Brown, how worried should we be about the OLine?

I’m not too concerned about the offensive line, mainly because Brown will be back, and a lot of Miami’s pressures were on blitzes. Not every defense blitzes as much as Flores, who is known for pressuring the QB. However, my one worry about the O-Line is that this is a much better run-blocking unit than a pass-blocking group. They need to set the tone in the trenches by knocking defenses backward and won’t win many finesse fights. Downhill running, play-action, and fewer true pass sets are this group’s wheelhouse. But that means they need to run the ball better than they did in Week 1.

If you’ve reviewed Mac’s college tape, with NFL strength training is there any chance he improves his arm talent a la Brady? Furthermore, can he hit all the throws with where his is currently at? Finally, can he throw cross hash to the other side of the field’s numbers?

I have zero concerns about Mac Jones’s arm talent. He has plenty of zip on drive throws and can get it there on a deep ball. Sure, there are times, such as the ball to Jakobi Meyers against a zero blitz last week, where he doesn’t have that extra power when he can’t step into the throw. But every quarterback loses velocity when he’s under pressure.

On the far hash question, the play above should answer that.

Stevenson ran early on the first game, the fumble must been a reason for him to be benched, will we se him longer this time around? How many touches by a rookie RB is the record in the BB era?

Even after just one fumble, the leash on Stevenson is getting shorter and shorter. Remember, the Pats’ rookie also fumbled in the preseason. Ball security is job security, especially in New England, and as soon as this weekend, we could see J.J. Taylor get his chance to spell Damien Harris. In a 17-game season, Harris’s workload is concerning. After the Sony Michel trade, the Patriots need either Stevenson or Taylor to emerge as a reliable backup to Harris. If not, that trade is going to look like a mistake.

Do you think the Patriots regret trading Sony for a 2023 pick? Harris runs so hard, and if Stevenson can’t pass block then he won’t play. If Sony is still on the team maybe he relieves Harris on 5 to 8 of those carries.

Speaking of the Michel trade, the move was made under the impression that Stevenson or Taylor would emerge as legitimate options in the Patriots’ backfield. If that doesn’t come to fruition, it’s a misread of the situation by the coaching staff. We are only one game into things, so let’s not overreact. Still, even though Michel wasn’t a special talent, he was reliable. The Pats could’ve used a reliable Sony Michel in Week 1. Let’s hope that Stevenson or Taylor takes advantage of the opportunity.

How do you think the corners did week 1 ?

There were some poor situational moments for the corners in Sunday’s loss to the Dolphins. Mainly, Jalen Mills giving up a 13-yard catch on a slant to DeVante Parker on 1st-and-14 on the final drive and other plays like it throughout the game. However, that was the lone catch Mills allowed into his coverage, and it’s hard to get on a group that gave up 202 passing yards and was money on third down. The Patriots’ secondary is what it is without Stephon Gilmore. It’s not a dominant group, but on the whole, they held it together against Miami.

What do you view as a successful season for Joejuan Williams? Do you anticipate we see more of him, especially with Gilmore’s absence?

Williams should’ve earned playing time in the snaps that Jason McCourty took with him to Miami, even before Gilmore’s injury. As the 46th overall pick in 2019, Williams was drafted as a developmental player who Gilmore and McCourty could pass the torch to eventually. Unfortunately, it hasn’t gone that way. The constant issue you see with Williams’s game is staying connected to underneath routes. He’s a decent coverage player on vertical routes but can’t transition his hips when the receiver breaks the route off and struggles to recover. I’m not sure if that’s fixable. He may start losing playing time to Shaun Wade, who has garnered a lot of praise from teammates for his athletic ability.

Given how well Agholor, Meyers, Smith, Bourne, & Henry looked in week 1, is there really a realistic chance for Harry to produce anything this year? He sounds like a gameday inactive to me.

Harry had a strong training camp. He was more explosive off the line and creating separation down the field. Will that carry over into the regular season once he’s healthy again? Only the coaches will have that answer. But the Harry we saw over the summer before the injury was a game-day contributor. The snaps will figure themselves out based on player performance.

Do you think patriots should have kept cam as a goal line or red zone run option? I know it’s tough to stop when the web is a legitimate run threat.

In theory, it would’ve been great to keep Newton and run a Taysom Hill-type package with him. But Hill isn’t a former NFL MVP and Heisman Trophy winner. Newton himself said it best when he said his aura is why he is no longer here. There is a better chance of the Pats installing a few plays for Malcolm Perry when he’s healthy out of the wildcat than keeping a former MVP to play five snaps a game in that role.

Why is John Brown not at least, in for a workout?
Believe would fit and not just have Nelson with some speed.
Already dealing with an ankle issue.
See enough flashes from Harry not too?

The Patriots have no plans currently to work out Brown or any other name-brand wide receiver. Look, I get the clamoring for wide receiver help, and I apologize for sounding like a broken record. The reality is this: the Patriots handed out $77.5 million guaranteed to Hunter Henry, Jonnu Smith, Nelson Agholor, and Kendrick Bourne this offseason. They’re rolling with this group until the results on the field justify another move.