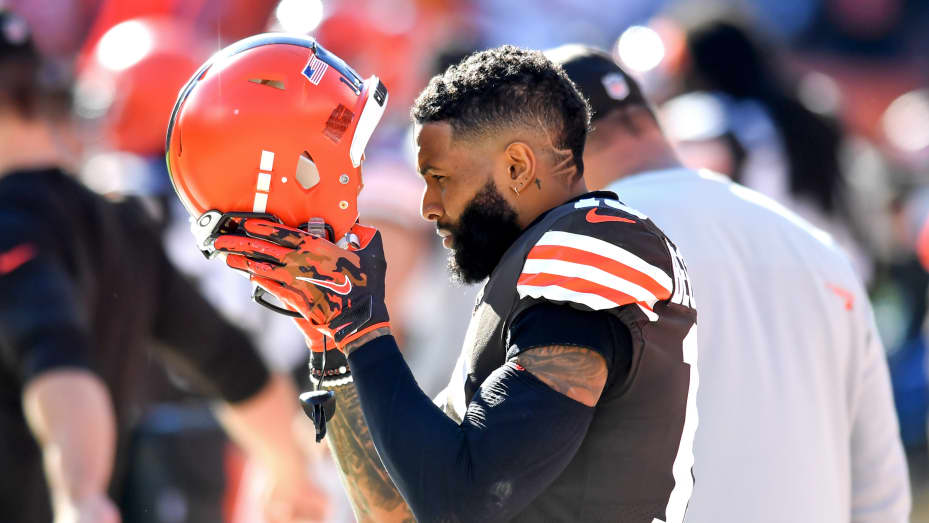 The Patriots’ offseason plan for their new-look offense was easy to figure out by following the money.

According to reports, New England sold the two free-agent tight ends on joining forces by comparing the duo’s potential to their two-tight end offense with Rob Gronkowski and Aaron Hernandez in the early 2010s. There were high, high hopes and expectations. 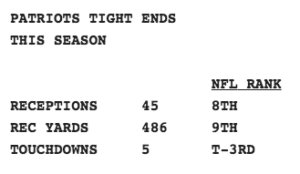 Based on volume stats, the Patriots’ investments in Henry and Smith are paying dividends, with the tight ends producing at a top-ten rate relative to other teams’ production from the position.

However, New England’s passing offense remains average, ranking 17th in both pass DVOA and expected points added per-drop back this season. Some of that is a pedestrian offensive line in pass protection, a rookie QB still learning the ropes, and other non-TE factors.

But a deeper dive into the efficiency of their tight end-centric offense points to another area where improvement is needed: the Pats aren’t getting enough out of their two-tight end packages and are only using both tight ends on the field together on 26.3 percent of snaps.

(according to Sports Info Solutions)

Patriots quarterback Mac Jones’s passing numbers aren’t exactly eye-popping with both Henry and Smith on the field. Plus, New England is producing a negative EPA on rush attempts with their new tight end tandem playing simultaneously (-0.19, 22nd in the NFL).

We have seen flashes of what the grouping is capable of over the last few weeks. Here, the Pats run a four verticals concept with Henry and Smith on opposite sides of the line. Dallas defends the Patriots’ bigger personnel with a post-safety structure, and after carrying out a play-action fake, Jones finds Henry for six by throwing the seam away from the post safety.

In their win over the Jets, offensive coordinator Josh McDaniels’ got more creative with Smith’s usage, and they continued some in last week’s victory over the Chargers.

Henry is more of a tactical route-runner that’ll win with smooth routes and savvy. Smith, on the other hand, is an athlete that needs the ball in space.

The Patriots get Smith rolling with a tight end screen out of a nub formation in this play. The alignment puts Smith and Henry as the lone players on the left side of the formation. Then, the Pats run play-action with Henry crossing away from the point of attack, occupying the linebacker level, opening space for Smith to catch-and-run with the screen pass.

The grouping has explosive potential for the Patriots if McDaniels’s creative juices continue to get Smith more schemed touches that present him with YAC opportunities in the open field. And Henry’s reliability as a chains-mover and red-zone is already a factor.

But if the Patriots are going to hit their ceiling offensively, they need more out of their two-tight end packages.

Let me put it to you this way: there will be mutual interest between the Patriots and Beckham. Beckham has spoken on the record about his appreciation for Bill Belichick’s ability to use players properly to get the most out of them. And, from what I’m told, the feeling is mutual with Belichick’s feelings on OBJ. The question now is does Beckham strong-arm his way to free agency, or, with Cleveland converting his base salary into a signing bonus, will he get claimed on waivers? The Patriots are 15th in the waiver order and there will be league-wide interest in Odell. Still, the player has some say here on if he gets claimed. He may refuse to play if a certain team claims him. The Pats would have better odds signing him as a free agent than winning the waiver wire sweepstakes.

Any chance the Patriots try to go for DeSean Jackson?

To be honest, I don’t see the fit here for DJax. He’s a fun player to watch and is still a game-breaking deep threat. But he’s at his best as a speed slot or running routes from a condensed alignment. In other words, he’s not a true X. There’s too much overlap there with players already on the roster, and he’s not someone you bring on to surpass someone that’s already here. I’d be more open to it if he could play the X, but he’s a Z, and the Pats have a logjam there (Agholor, Bourne, Meyers). He’s redundant and not a significant upgrade.

Is there any update on Trent Brown?

The word on Trent Brown is that we won’t see Brown any time soon. He was eligible to return off injured reserve last week and still hasn’t practiced. My sense is that the situation won’t change for a while. The good news is that the Patriots’ current starting five with Mike Onwenu at right tackle and Ted Karras at left guard is getting the job done. Building continuity with that five-man unit will only improve their production. The Pats should be okay with the current group.

Who's your pick for unsung hero of the team?

Patriots safety Adrian Phillips might not qualify anymore after being named AFC Defensive Player of the Week, but he’s not on the national radar and should be soon. Phillips embodies everything the Patriots ask out of their defensive backs: versatile, tough, dependable, competitive, and productive. He can play any role in the back seven from playing at the linebacker level, post safety, half-field safety, robber, man coverage, and plays the run and can blitz. Phillips does it all with a high IQ and great instincts, too. He’s a great football player.

Why don't they throw Harry the ball in the Redzone? They just use him to run block

There’s no doubt that Harry looks the best he has ever been as a pro this season. He’s more explosive off the line, quicker out of his route breaks and with his gather steps, and looks more decisive and confident in his movements out there. After the trade request and another injury, Harry is working his way back into the coach’s good graces. He will play more if he keeps this up, but he’ll need to earn the playing time. It’s hard to blame the coaching staff for taking a “we’ll believe it when we see it” approach with Harry.

Do the @Patriots (actually) have a 'Defensive Coordinator'? What is Steven Belichick's title & responsibilities on game day?

No, the Patriots don’t technically have a defensive coordinator, and that side of the ball is a team effort. Steve Belichick calls the plays on game day with input from Bill in the headset and Matt Patricia from the coach’s box. Inside linebackers coach Jerod Mayo is heavily involved in game-plan meetings when it comes to scheming up the front seven and has some game-day input. But it’s the two Belichick’s who are running the ship with Patricia in a quality control role.

Who is the best NFL comp for barmore?

I wrote about Barmore’s impressive rookie season on Thursday, and you can read that piece here. As Belichick said, Barmore’s playing strength and quickness are a rare combination for a 310-pound player. With that said, I hate player comparison because each player is unique, and it puts unfair expectations on guys. If I say Richard Seymour, then you’ll expect a future NFL Hall of Famer. But since you’re making me, purely from a skill set perspective, somewhere between Seymour and Ty Warren feels right. Barmore is built more like Warren but has Seymour’s explosiveness.

Are you expecting the screen game to return this week? Missed it this past week.

Due to their team speed, Carolina is the best defense in the league at defending screen passes, allowing a stingy 3.7 yards per screen pass. Screens are typically used to slow down pass rushers and beat undisciplined players with misdirection. But the Panthers fly to the football and have instinctive players in their back seven. I’m sure McDaniels will call a screen or two early to see if Carolina is ready for it. However, I don’t expect screens to be very effective this week.

are we wasting stevensons talent and are we messin with his head making him unactive for some games?

Saying the Patriots are wasting Stevenson’s talents is going a little too far. Stevenson is a talented ball carrier with impressive contact balance, lateral agility, and hands as a pass-catcher. But this isn’t a case where they’re keeping a Ferrari in the garage. Based on the tape, Stevenson is still learning his run reads and is running a little tentative at times, most likely because he doesn’t want to fumble again. Once he runs more freely as he did in the preseason, then we’ll see him truly break out. Stevenson seems more willing to rev it up to the next gear when he gets into the open field as a pass-catcher, so it’s there.

I know it's early to say but what do you think the Patriots off-season strategy will be? We just put a lot into the offense but it doesn't feel there quite yeat and with less cap to work with than last year I see some tough decisions coming

Although it’s a little early for this question, the Patriots’ decisions with their free agents on defense will decide the feature on that side of the ball. They have a blue-chipper hitting the open market in J.C. Jackson, veteran cornerstones (McCourty, Hightower), and role players (Bentley, Phillips). Belichick needs to make some tough decisions here, and unless McCourty and Hightower play ball with their contracts, the team might need to move on from their aging vets. It’s fair to say that both McCourty and Hightower’s best football is behind them. It might be time to pass the torch.