Patriots Mailbag: Will the Patriots Trade Stephon Gilmore This Offseason? 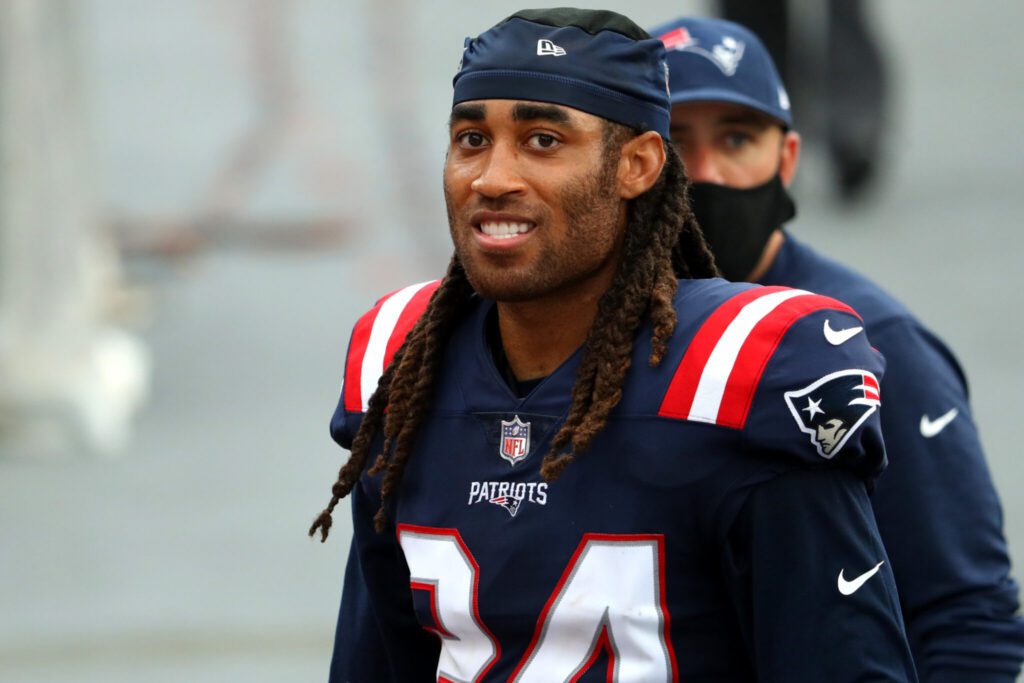 The Patriots are approaching a significant rebuild this offseason, but one of their biggest looming roster decisions is moving to the back burner in place of quarterback and receiver talk.

New England’s top cornerback, and 2019 NFL Defensive Player of the Year, Stephon Gilmore, was the topic of conversation in trade discussions dating back to last year’s draft.

Bill Belichick was seeking a first-round pick plus an established NFL player for Gilmore at the time, who still had two years remaining on his deal, but a trade never came to fruition.

Gilmore then entered training camp disgruntled and wanting a new contract after back-to-back All-Pro seasons. The Pats and Gilmore agreed to a salary advance disguised as a raise as a short-term solution, but then rumors began to swirl again around last year’s trade deadline.

Entering his age 31 season, Gilmore will take home $7.3 million in the final year of his deal, which ranks 23rd among cornerbacks, certainly below market value.

New England doesn’t seem eager to sign Gilmore to an extension to keep the star cornerback beyond the 2021 season, and we’ve been down this road before with Belichick.

Belichick released Hall of Fame corner Ty Law in 2005, let Aqib Talib walk as a free agent in 2014, and then Darrelle Revis departed after one season with the team in 2015.

Gilmore’s original five-year, $65 million deal with the Patriots is the biggest free-agent contract ever handed out by Belichick, so maybe Gilmore is different, or perhaps he’s on his way out.

The question now for the Patriots is, after failing to maximize Gilmore’s value last season, what can they get for him in a trade? And how will they replace him on the field?

Although a substantial package is unlikely, receiving a top 50 pick from a contender trying to upgrade its secondary isn’t unrealistic and should be welcomed by the rebuilding Patriots.

Assuming they address their offensive needs through veteran trades or free agency, there are three first-round cornerback prospects in April’s draft that could interest New England at 15.

The best of the group is Alabama’s Patrick Surtain II, who the Pats will have good intel on from Nick Saban. Surtain is a calm, technically sound press-man corner with great length and physicality; a perfect scheme fit whose father played in the NFL for 11 seasons.

Virginia Tech’s Caleb Farley is another option who has more explosive athletic traits but lacks Surtain’s polish, while South Carolina’s Jaycee Horn is a solid man coverage corner as well.

After addressing their needs offensively through a different avenue, the Patriots could conceivably replace Gilmore with a cost-controlled first-rounder with the 15th pick.

The next step would then lead them to either a team-friendly deal with restricted free agent JC Jackson or Jackson might play on a one-year tender to get the most money as a UFA in 2022.

Having those two assets, Jackson and a first-round cornerback, would give the Patriots two young corners, both counting modestly against the cap while still producing at a high level.

Plus, Belichick would then have another draft selection to address the various needs the Patriots have, potentially landing three players in the top 50 picks if they play their cards right.

As we always say, that isn’t the only way New England could approach their offseason. But landing another valuable draft pick for Gilmore to expedite a rebuild while maintaining a strong secondary with cost-controlled players seems like a Belichick thing to do.

Now that we’ve addressed the Gilmore situation, let’s answer some of your questions:

To what extent can the Patriots take advantage of league-wide salary cap pressure given their cap space? Any specific cap casualties you have in mind that might land in NE?

I’m going to take this question as an opportunity to discuss JJ Watt in New England, who was released Friday by the Texans. Watt is the prototype for a 3-4 defensive end in Belichick’s scheme. He has tremendous length, upper-body power, and flexibility to play with proper leverage in the run game and the explosive traits to make plays in the backfield and rush the passer. Although he’s a perfect scheme fit, Watt will likely go ring chasing or end up with his brothers in Pittsburgh. Still, even at this stage of his career, Belichick and Watt are a match made in heaven. I could see both sides recognizing that to a degree, which might make the Patriots contenders to land Watt. According to our betting partners at BetOnline, the Steelers are the favorites to land Watt, followed by the Bucs.

If you got to pick: Draft a 1st round QB, mid round QB, or simply look to the veteran market?

What you think the Pats will do: Draft a 1st round QB, mid round QB, or veteran/veteran with rookie?

My preference is for the Patriots to trade up in the first round if they feel good about their evaluation of one of the top four quarterbacks, but I don’t think that’s likely. The most likely scenario is Cam Newton or another veteran stop-gap (Jimmy G maybe) paired with a day two draft pick at the position. We have a long way to go, but I’m preparing myself or Cam or Jimmy G plus Kellen Mond on day two. I don’t see the Patriots overextending via the veteran quarterback market or trading up in the draft for a quarterback.

Do you think Mac Jones will be there at 15 given his recent increase in visibility among nfl teams?

I think Jones will be there at 15. Sometimes the media buzz on a player doesn’t align with how the league feels, and my sense is that is becoming a reality with Jones. I’m not crazy about Jones at 15, either. He’s going to be a respectable NFL starter in the mold of a Kirk Cousins or Derek Carr, and with plenty of holes to fill, is that the wisest use of the 15th pick? If the Pats make significant additions to their skill positions in March, then maybe Jones at 15 makes more sense. Jones does a lot of the little things well and reads things quickly, which makes him intriguing for the Patriots.

Trey Lance is a really intriguing prospect. He can stand in the pocket and drop 60-yard dimes on far-hash fades or seam throws while also running read-option. However, his lack of experience and spotty accuracy doesn’t necessarily scream Patriots. They typically go for quarterbacks that were multi-year starters in college. I could see them taking Lance at 15 if he falls in their laps but not trading up. Trask is more of a touch thrower than someone who drives the ball downfield with velocity. If he slips on day two, I like it. I’m all set on Minshew mania. Way too inconsistent.

How much would it cost to acquire Marcus Mariota? If it’s a lot, then would it make more sense to bring back Cam?

Mariota strikes me as the other veteran possibility outside of Cam and Jimmy G. I’ve been on the record with my support for a Mariota trade already since his accuracy and touch within 20 yards fits the bill, and he still brings a mobile element. I think there’s talent and potentially untapped potential there. How much would it take? Maybe a third-round pick.

I’m starting to see some mock drafts having Parsons fall to the Pats at 15, is this actually realistic? I know the allegations off the field are some pretty nasty things, but Gross-Matos is also named in those allegations and he was drafted last year no problem.

Parsons is the best defensive prospect in the draft, in my opinion, and his off-field red flags could easily cause him to slide. Along with the allegations against him in a hazing lawsuit, trouble seems to follow Parsons, and fair or not, that will affect his draft stock. That could mean he falls in the Pats’ laps at 15, which, on the field, would be a fantastic addition. But they’ve also been reluctant to draft players with checkered backgrounds in the first. Still, he brings sideline-to-sideline speed, plus coverage ability, and pass rush upside that we are clamoring for at linebacker.

Of these three 1st round linebackers, Parsons, Komoroeah, Collins, who do you think is the best fit for the Patriots?

Tulsa linebacker Zaven Collins is the best fit for the Patriots in the 2021 draft at any position. At 6-4, 260 pounds, Collins fits the mold for a New England linebacker to a tee. He’s scheme versatile with the ability to play off the line against the run, in coverage, or as a blitzer up the middle and then can move to edge rusher in passing situations as well. His last name makes the connection seem obvious, but Zaven reminds me of Jamie Collins, except that he’s more pro ready than Jamie was in 2013. The current Collins truly checks every box for the Pats and is an athletic freak at linebacker. He’d be an excellent pick.

What's a more urgent upgrade, better LB play or stouter edges? And might they play Hightower more on the edge if they acquired a LB through FA or the draft?

This is a good question in terms of where the Patriots allocate their top assets. They had a difficult time setting the edge last year, but part of the reason they struggled was that they had nobody at the second level with the range to patrol sideline-to-sideline. Someone like Parsons or Collins could help in both areas. I also like the idea of them going after Matt Judon or Tyus Bowser in free agency. They can both play on the edge and drop into coverage. I have a tough time paying an off-ball linebacker in free agency, but Jayon Brown from Tennessee would be a nice addition as an athletic inside ‘backer.

Would you trade for von Miller

Miller is in a similar category as Watt for me. I think he’d be a fantastic addition as a rush outside linebacker in New England’s 3-4 scheme, as he was in Denver, but I’m not paying his $18 million cap number. If Denver releases Miller, as Houston did with Watt, it would get interesting.

What do you think about trading for Brandin Cooks? Texans are in a tough spot keeping Fuller and Cooks. His contract looks affordable and he could be available for a day 3 pick with the Texans cap issues

Cooks’ 2017 season with the Patriots was extremely underrated. Cooks put up 1,082 yards and seven touchdowns in his first year in the system plus added 244 yards in drawn penalties. It ended poorly in the Super Bowl, but I’d love to see him back here. His $12 million cap hit for his new team is very doable. But Cooks wants to stay in Houston after bouncing around the last few seasons and probably won’t be thrilled about New England’s quarterback situation either. Still, let’s appreciate 2017 Cooks more.

What are the chances you estimate of James White returning?

I get this question a lot because we all love James White. I’ll have a better gauge of his market in a few weeks, but if the Patriots want to bring White back and he wants to be here, it won’t be difficult to get a deal done. However, I wonder if White would rather return to Florida to be closer to family after his father’s passing. If so, a reunion with Tom Brady in Tampa Bay makes all the sense in the world. The Bucs don’t have the cap space to make significant moves, but they could sign White, who would immediately upgrade their pass-catching back role.