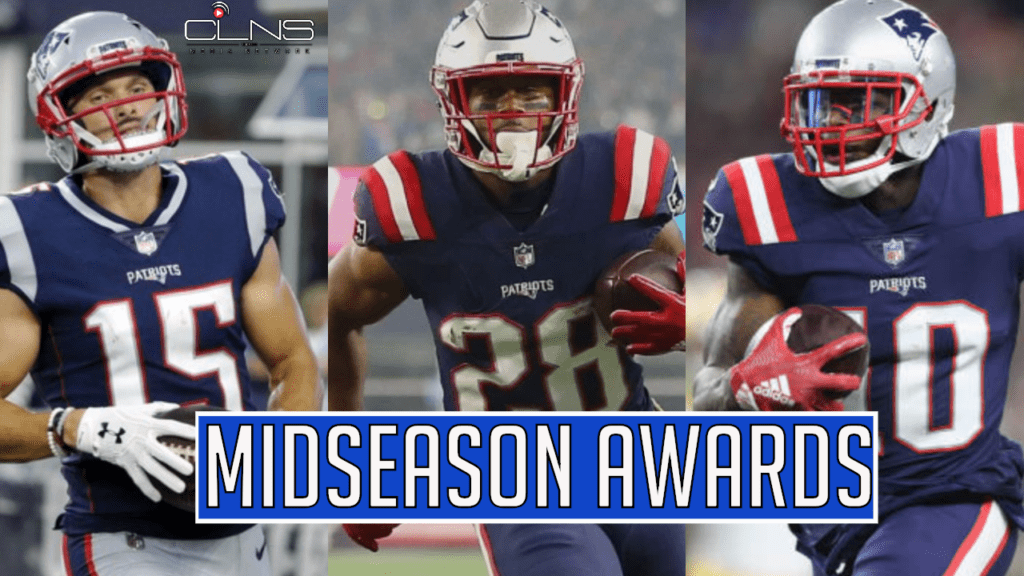 As the Patriots rest up on the bye week, let’s take the week off to hand out some mid-season awards at what’s roughly the halfway point of the season.

The Patriots stand at 7-3 and in good position heading into the last six games of the season, so although the loss in Tennessee was disappointing, there’s still plenty of reason to praise what this team has accomplished.

And still the MVP of the Patriots. Brady has struggled over the last three games as I detailed here, but the 41-year-old is still one of the premier quarterbacks in the NFL. Brady is sixth among quarterbacks in overall grade (89.2) and seventh against pressure (63.6), according to Pro Football Focus. Talks of his demise are once again premature as the Pats quarterback is as valuable as ever to his team, and continues to set the standard for quarterback play across the league.

Although Brady is the most valuable, running back James White has been Brady’s only consistent option in the passing game every week. White leads all running backs with 66 receptions (fifth overall), 562 receiving yards, and six receiving touchdowns this season. He’s on pace for 106 catches (would be a new NFL record for a running back) and 899 receiving yards which would shatter the single-season franchise records at the position. Furthermore, White has converted nine of his 24 red zone touches into touchdowns, making him the Patriots’ best red zone threat this season.

Gilmore had his worst game of the season against the Titans, and defensive end Trey Flowers deserves some love here too, but the Patriots’ top cornerback gets the nod after a stellar first half of the season. Gilmore ranks third in the NFL with a 46.4 completion percentage into his coverage (min. 15 targets) and is second in the league with 12 pass breakups. In ten games this season, Gilmore has allowed an average of 33.1 receiving yards into his coverage. The teams big-money signing last offseason has shut down the likes of Sammy Watkins, Allen Robinson, and Davante Adams this season en route to a potential Pro Bowl selection.

ROOKIE OF THE YEAR: SONY MICHEL

If rookie linebacker Ja’Whaun Bentley were still on the field, he’d probably edge out Michel, who is the last man standing to take home this award. However, Michel has earned it averaging 64.7 rushing yards per game in seven games played, which would be the most by a Patriots rookie since Robert Edwards in 1998. Michel padded those stats with three-straight performances with over 95 rushing yards, also the longest streak by a Pats rookie since Edwards’ inaugural season in the late-90s. Once Michel got acclimated, his vision, burst, and ability to convert that acceleration into power became apparent explaining his status as a late first-round pick. The former Georgia star has dealt with injuries of his own, missing three games so far this season, but his talent cannot be denied.

We had to wait four extra games for his return, but wide receiver Julian Edelman has been impressive in his first year back from an ACL tear that ended his 2017 season before it started. There’s still one more gear missing from Edelman’s game at times, and a recent ankle injury could be to blame, but he’s averaging 71.0 receiving yards per contest, which would be the second-most in a season in his career, and his 71.4 catch rate would be a career-high. Also, Edelman is still one of the most productive slot receivers in the league, averaging 1.69 yards per route run out of the slot (eighth in NFL) with a 75.7 catch rate (ninth). Although he’s still working his way back, statistically, Edelman and Brady haven’t missed a beat, a testament to Edelman’s work ethic as he returns from a severe injury.

This one might come as a surprise, and his playing time and counting stats don’t back it up, but the film suggests that Dorsett has made significant strides this season as a route runner. The former first-round pick has improved his understanding of attacking leverage out of his stem, is better at setting up defenders at the top of his route, and has developed the ability to sink his hips and cut to create separation. Although he lost playing time with the addition of Josh Gordon, Dorsett was impressive early on in the season before Gordon’s arrival and continues to make plays when called upon; if Chris Hogan’s struggles continue, expect Dorsett’s playing time to increase.