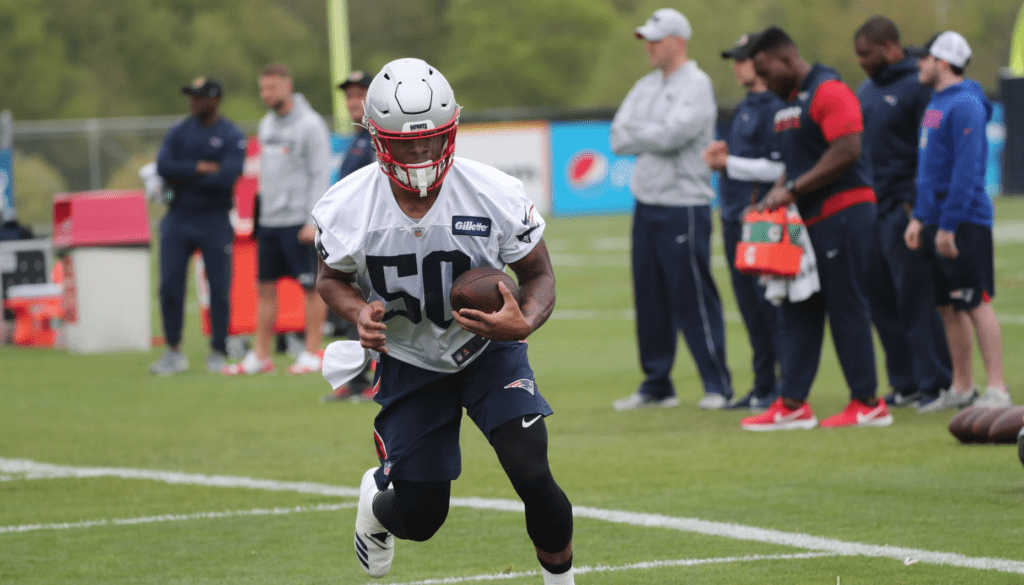 FOXBOROUGH — The Patriots will have every healthy body on their 90-man roster in attendance at a three-day mandatory minicamp this week at Gillette Stadium.

Although these sessions are mandatory, we are still in phase three of the offseason program, which means there’s no live contact at these practices. But there is some semblance of real football with seven-on-seven and 11-on-11 drills pitting the offense against the defense.

As noted previously, the Patriots have one of the most competitive 90-man rosters in the NFL, and they’ll have to part ways with players that will likely make 53-man rosters elsewhere.

With that in mind, here are some thoughts on the Pats roster ahead of this week’s minicamp:

1. Brady’s Back: “Allow Him to Reintroduced Himself…”

For the first time since the Super Bowl, Brady will be at a team practice with the mandatory tag on this week’s minicamp. With Brady’s return, we’ll get our first glimpse of the six-time Super Bowl champion throwing to his new weapon in top pick N’Keal Harry. Harry got the exclusive invite to a private workout with Super Bowl MVP Julian Edelman and the Pats QB, so hopefully, the chemistry is already brewing between the 41-year-old and 21-year-old. When Brady reappears from his offseason R&R, things tend to ramp up a little bit on the practice field. And under the annoying but necessary column, we might get a comment from Brady on his contract situation. Brady is in the last year of his deal.

During the Belichick era, the Patriots have carried a rookie backup quarterback twice: 2009 (Brian Hoyer) and 2014 (Jimmy Garoppolo). They’ve also carried three quarterbacks nine times in Brady’s 18 seasons as the starter. As a fourth-round pick, Stidham finds himself in between the second-round selection in Garoppolo and the undrafted Hoyer, but the veteran Hoyer has the leg up on the Auburn product. Based on OTAs last week, Stidham has a long way to go before he has a good enough grasp of the offense to let the ball fly; he was tentative and turnover prone in the session we saw, and that won’t win him the backup job. For now, it would be a surprise if Stidham beats out Hoyer.

We’ll get another look at the Patriots’ plans at left tackle after losing their starter in free agency for the second consecutive offseason. Adding to the uncertainty was the retirement of veteran Jared Veldheer a week after he signed with the team and injuries to two top candidates, Isaiah Wynn and Yodny Cajuste. Wynn is “penciled in” as the starter, but he’s still rehabbing an injured Achilles that caused him to miss his entire rookie season. As for Cajuste, he had quad surgery in late March that could hold him out until July. With their youngsters on the mend, left guard Joe Thuney slid over to his college position of left tackle during OTAs. We’ll see if that continues or if one of the recent draft picks can get on the field.

With a loaded rookie class, the 2018 “redshirts” need to have strong camps to make a competitive roster. Last season’s first-round picks, Isaiah Wynn and Sony Michel, are roster locks along with standout linebacker Ja’Whaun Bentley. However, second-round selection Duke Dawson and sixth-rounder Braxton Berrios are fighting for jobs. Keion Crossen (seventh round) and JC Jackson (undrafted) outplayed Dawson last summer before he landed on IR with a hamstring issue, and Berrios struggled to get separation against NFL defensive backs. It’s a big summer for those two. Second-year linebacker Christian Sam is in the same boat as well.

5. Sorting Out Defensive Back Hierarchy

Along those lines, Dawson needs to work his way through a crowded defensive backfield. One of the surprises of OTAs last week was how heavily involved Obi Melifonwu was with the starting defense. Melifonwu seemed very comfortable in the Pats’ defensive backfield directing traffic and making plays. It’s tough to find a roster spot for Melifonwu and some of the other fringe roster players, making this a fascinating competition to monitor as we move forward. As it stands right now, here are players that I have making the roster in the secondary:

The Patriots and Ben Watson weren’t surprised by the news, but his four-game suspension was news to us. With Watson sidelined for the first month, that leaves an open roster spot during his suspension. We could see another tight end take that spot, but my eyes will be on free-agent addition Matt LaCosse whose roster spot is likely safe given the financial commitment the team made to him in March. LaCosse looked good during OTAs. He’s got some speed to get down the field and was comfortable running routes as a receiver. LaCosse has natural hands, and he doesn’t fight the ball when it comes his way. We’ll have to wait for training camp to see if LaCosse can hold up as a blocker, but his receiving skills were notable during these non-contact practices.

The punter battle ramps up this week as Ryan Allen will be at practice to compete with Jake Bailey. Bailey was impressive last week booming punts showing off a massive leg with some control of the ball as well. Based on talent and versatility, Bailey can also handle kickoffs; the rookie has the advantage. But it’s tough to move on from a reliable and consistent option like Allen.