The Patriots' defense has a winning formula that's different than past years. 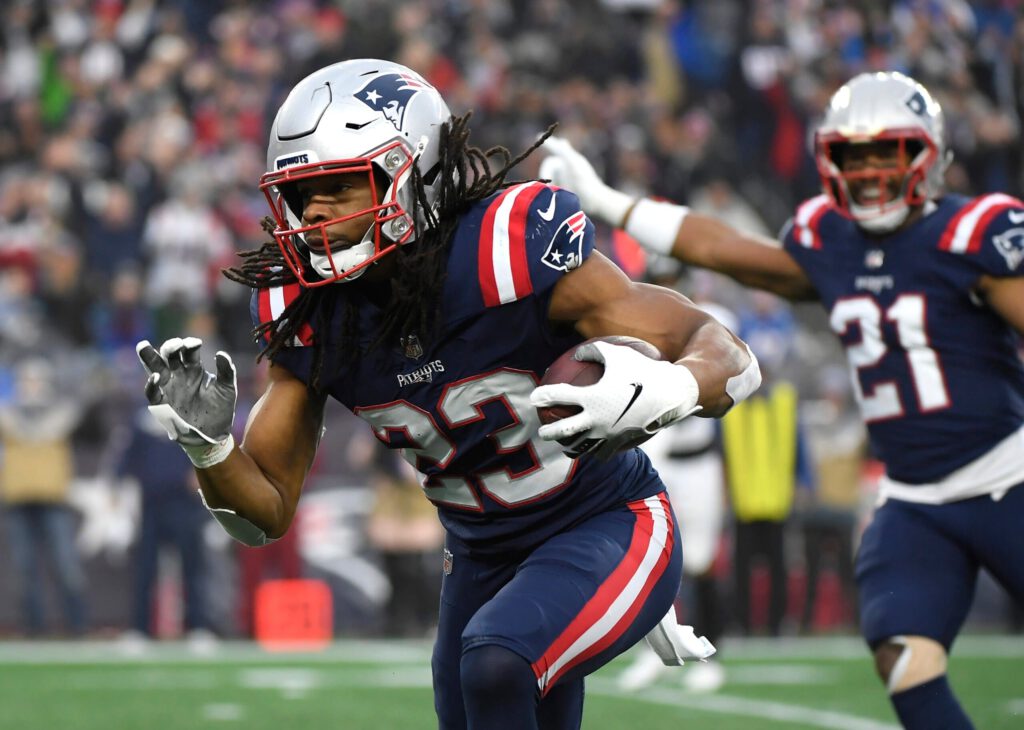 The Patriots’ get-right win over the Jaguars was all about laying a foundation for a postseason run.

Blowing out a team of Jacksonville’s caliber isn’t the end goal for Bill Belichick’s team. Still, New England hopefully can use good processes to yield results as the competition stiffens in January.

Although we echoed our concerns about the Patriots’ offense replicating its 50-point outburst come playoff time, defensively, the Pats played with a replicable coverage formula.

Belichick is notoriously known for playing more man coverage than any defensive architect in the NFL, and the Pats are once again among the league leaders in cover-one man frequency.

However, their secondary this season thrives on disguise, versatile DBs who can handle various high-stress zone responsibilities, and ball-hawking by their top coverage players.

With the Buffalo loss two weeks ago as the most recent example, exposing this group of defensive backs to too much man coverage doesn’t often end well for the Pats defense.

Instead, they’re much better off trying to limit a group of quarterbacks in the AFC playoffs who are known for being aggressive downfield by spinning the zone coverage dial.

In their win over the Jags last week, the Pats were in zone coverage on 58% of their coverage snaps, and two out of their three interceptions were the result of post-snap zone rotations.

On Myles Bryant’s second-quarter interception, safeties Devin McCourty and Kyle Dugger showed rookie Trevor Lawrence a two-high safety shell before the snap. But the call is cover three “buzz,” which allows the defense to disguise a three-deep zone. After the snap, Dugger rotates into the crosser window as the “buzz” defender. Dugger’s rotation forces Lawrence to come off his downfield options to the check down in the flat. The ball bounced off running back Ryquell Armstead’s hands and into Bryant’s lap for the interception. Still, even if Armstead catches the pass, Bryant is screaming down to make the tackle for a minimal gain.

The Pats dialed up an even more “exotic” rotation on Kyle Dugger’s interception on third down.

They started in a two-high shell and called a “double buzz” scheme, where Dugger and Adrian Phillips rotate down into robber zones while McCourty rotates back to the post. Lawrence never sees Dugger rotate into the deep curl window, and the Pats safety jumps the route for a pick.

Although they’ll face more experienced quarterbacks with better talent around them in the playoffs, leaning on zone structures has worked for the Patriots’ defense all season.

According to Sports Info Solutions, the Pats have intercepted 11 passes to only four touchdowns allowed in zone coverage this season and are tied for second-best in expected points added per play allowed.

New England might not have the cover talent to match up one-on-one against the high-powered offenses in the AFC as they have in past years.

But, as always, the Patriots will adapt to their strengths and put players in positions to succeed.

If that’s the case, expect New England to use their zone coverage formula come playoff time.

Without further ado, let’s empty the notebook with the rest of our film notes from Week 17:

With the two interceptions above as evidence, Dugger plays a massive role in the Patriots’ secondary as the latest Belichick chess piece at hybrid safety. He can do it all from robber/buzz assignments, split-safety zone, post-safety zone, man coverage on tight ends, and run support.

Along with his involvement on the two picks, his stick in the hole on Jags running back Dare Ogunbowale popped off the tape. The Jags are running a split-zone scheme and set up the cutback well, getting hat-on-hat backside with the tight end coming across to kick out Van Noy. Ogunbowale’s job is to beat Dugger, the lone unblocked defender coming from depth as a split-safety player. Dugger fills his gap, doesn’t overpursue inside, and makes the play.

If Dugger whiffs on the tackle, Ogunbowale is running for a while but gains four yards instead.

The Pats’ second-year safety is noticeably improving in every area of his game this season.

Due to Matthew Judon’s bout with the coronavirus last week, New England’s top pass-rusher only played 11 snaps on Sunday.

Judon’s absence presented an opportunity for Chase Winovich to play his most defensive snaps (21) since Week 4 and Josh Uche was also on the field for 40% of the Patriots’ defensive plays.

Although Judon will rightfully take back his playing time, Winovich and Uche brought some juice to the Pats’ pass rush after a lackluster performance against Buffalo.

At this stage of their careers, the youngsters are more explosive pass-rushers than the older vets outside of Judon in the linebacker/EDGE group (Hightower, Van Noy, etc.).

For example, Christian Barmore’s sack came in tandem with Winovich on a T/E stunt. Barmore splits the right guard and tackle to penetrate the line of scrimmage. As Winovich wraps around, the right guard comes off Barmore to pick up Wino, freeing up the Pats’ rookie to muscle through to the quarterback.

The Pats prioritize setting the edge and containing quarterbacks in the pocket with their outside linebackers, which is the football explanation as to why Winovich and Uche were phased out.

But their potential matchups on Wild Card weekend all feature athletic QBs who will shred defenses if they’re given time in and out of the pocket to make plays (Allen, Burrow, Mahomes).

Although rush discipline is critical for Belichick, they might need the added play speed from Winovich and Uche.

We often talk about Patriots’ defensive backs playing to their leverage in man coverage or relying on help defenders in the middle of the field to position themselves properly.

Pats cornerback J.C. Jackson gave us some teach tape to show you how to perfectly play to his outside leverage on the red-zone third down play above. Jackson has outside leverage on Marvin Jones, knowing that he has help from Devin McCourty to the middle of the field, so he stays on Jones’ outside hip. When Jones breaks on the corner route, Jackson smothers him.

There were too many breakdowns in that area for the Patriots against the Bills. But Jackson, Jalen Mills, and McCourty, in particular, were on their game when the Pats played man coverage.

4. Running Behind the NE Wall on the Goal Line (Brown, Mason, and Onwenu)

Running behind a right side that features Trent Brown, Shaq Mason, and Mike Onwenu is completely unfair regardless of opponent.

And it’s not a surprise that the Patriots have the fifth-highest success rate in power situations, according to Football Outsiders (third and fourth down/goal line with less than two yards to go).

Here, the Pats block outside zone lead on the goal line, and check out the combo platter from Brown and Mason on #95. Mason walks Roy Robertson-Harris nearly onto the painted logo while Brown bumps and climbs to Myles Jack to run the Jags’ linebacker out of the hole. Plus, Onwenu gets the stalemate on the one-on-one against the DE and Andrews cuts down the shaded nose tackle. Nearly unstoppable.

New England’s 14 rushing touchdowns from inside the opponents’ five-yard line are tied for the second-most in the NFL this season.

Although Pro Football Focus disagrees with our assessment, Smith made some of his best blocks at the point of attack we’ve seen from him all season on Sunday.

The best block came on the crack toss to Rhamondre Stevenson, where everyone highlighted Trent Brown pulling out in front in space, which was awesome. But Jonnu gets the play started by keeping his feet moving to wall off Jihad Ward so Stevenson can get the edge. In the next play, Smith combos up to Jack in outside zone and gets a nice piece of the Jags’ linebacker.

PFF gave Smith a mediocre 50.2 blocking grade, but we felt he was better than that.

We all want to see Smith break out in the passing game. However, sometimes getting going in one phase sparks other areas of your game.