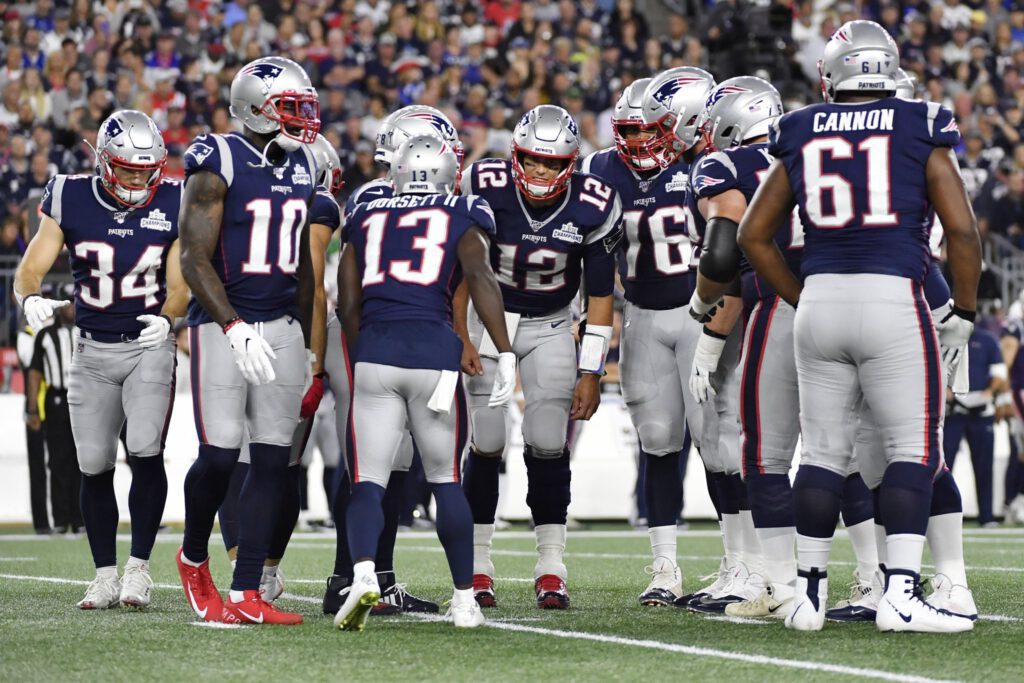 FOXBORO — the Patriots offense might be the most complex system at any level of football.

From veterans like Chad Johnson to rookies, some can and some can’t grasp the playbook.

“When you go from team-to-team, the only thing that changes is the verbiage. For me, it took me time to get used to a new playbook after being a decade somewhere else,” Johnson told Barstool Sports’ KFC radio a year ago. “So you have to get thrown into the fire and Tom and Bill command perfection right away.”

For the Patriots, they unveiled another iteration of the system on Sunday night against the Steelers.

Patriots offensive coordinator Josh McDaniels cycled through four different personnel groupings, and also had different variations within those groupings. The Patriots featured 20 and 21-personnel with fullback James Develin (32 snaps) or with two running backs on the field (18 snaps).

“We should always be mindful of making sure that our guys can execute what it is we ask them to and do it well and be aggressive,” McDaniels said. “Every week, we try to make smart decisions about what we want to have in, what we need to have in, and most importantly, what we can do well. So, as coaches, that’s what your job is.”

For current Patriots, learning the playbook takes them back to, well, school.

“I think just a mix of meetings and getting with coaches, something that doesn’t happen overnight. Something you keep building on.”

LaCosse mentioned that his strategy involves note-taking, “but it’s when you get out there and go do it; that’s when you really learn it.”

As for rookie wide receivers Gunner Olszewski and Jakobi Meyers, they leaned on flashcards to help them get up to speed.

“Our receiver room is piled up with flashcards, mainly for Jakobi [Meyers] and me. I got a stack that’s about ‘yay’ high of flashcards,” Olszewski told me.

“That was kind of to get the ball rolling, now I don’t use them as much because I actually have a general understanding of the offense, but early on it was definitely helpful to use flashcards.”

“It’s a full-time job. You always want to keep bringing it back up in your mind,” Meyers added.

“I have my notes out in front of me at all times, so that you know. That’s why we do a whole lot of flashcards. That’s what they tell us as soon as we get here is do flashcards so that you can pull them out at any time and quiz yourself.”

“That’s kind of what they preach here. Practice and the whole week before the game is going to be the hardest part. They put so much pressure on us both physically and mentally throughout the week that by the time you get to the game you’re so prepared and can’t wait till the game,” Olszewski said.

Meyers and Olszewski made the Patriots as undrafted rookies in part due to their ability to absorb information.

But for returning Patriots like Phillip Dorsett and Sony Michel, the process is a little bit different.

“Nah, I’m not a flashcards guy,” Dorsett said. “I take a lot of notes, and I read over my notes. That’s the type of guy I am. Some people learn better like that [using flashcards], but I’m a reader. I like to write a lot, so I write down everything that I hear, all the important points, and then just read it over again.”

For Michel, conducting walkthroughs, even at his house, helped him learn New England’s offense.

“I just walked through it. I’m a visual learner,” he said. “I have to walk through stuff. Whatever it takes, walk through in my house on my own. Reading it isn’t going to help me learn it.”

The Patriots will now try to incorporate another new weapon in seven-time Pro Bowler Antonio Brown.

Unlike those mentioned above, Brown doesn’t have a full spring and training camp to pick up the offense.

“Yeah, I mean, a long way to go. Obviously, he’s not familiar with our offense,” head coach Bill Belichick said. “It’s too much ground to make up in a few days, but we do the best we can, and we’ll see how it goes.

Belichick also mentioned that Brown is coming from different systems in Oakland and Pittsburgh.

Asked where those differences are Belichick said, “everywhere. I mean, the systems aren’t built from the same tree that branches. I mean, there’s just formations, play calling, protections, routes.”

“So, it’s associating one word with a word that you know, and now a new word and trying to associate those two. But, they might be the same, they might not quite be the same. There could be subtle differences based on different coverages or leverage that the defender plays, how we would run those routes.”

Brown is expected to make his Patriots debut against the Miami Dolphins on Sunday, and his immense talent will help him be impactful even if he only knows a small fraction of the offense.

But maybe he can borrow some of the flashcards over the next few weeks.