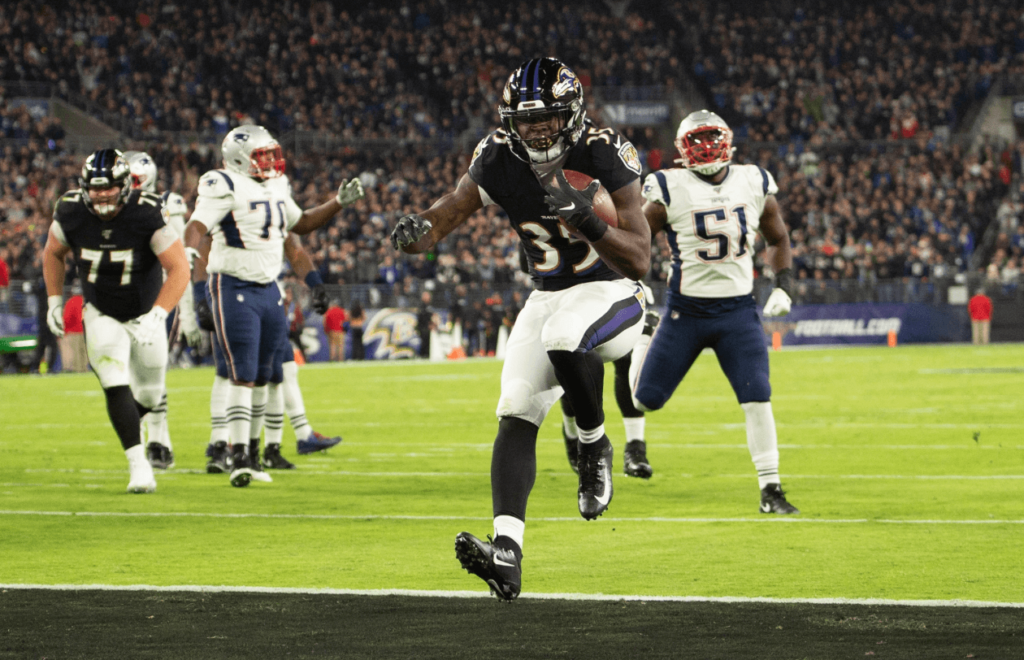 BALTIMORE – In the grand scheme of things, Sunday night was the best thing to happen to the Patriots.

Their 37-20 loss to the Ravens at M&T Bank Stadium serves as a system re-set on just how wonderful everyone thinks this team is.

Everyone, including the players themselves, wanted to know how they would handle a step up in competition and intensity. Devin McCourty led that charge after the Patriots’ ho-hum 27-13 win over the Browns a week earlier.

“There’s opinions and there’s truth. And the truth is, however we play, the stats and all of that, that’s what it is. Opinion is we’re probably not as good as people think and all of that, but I think for us as a defense, that hasn’t changed. We’ve never been as good as people think. We’ll try to continue to win games, and people will continue to say we’re not as good, but at the end of the day, the only thing that matters is each time you step on the field is you can get a win.”

Against the Browns, the effort was good enough. Against the Ravens Sunday night here in Baltimore, it wasn’t.

Even on a good day, the Patriots make a few mistakes but their overall execution usually makes up for it. Sunday night, there were too many mistakes and not enough execution.

From the Shalique Calhoun neutral zone infraction on fourth down in the first quarter that gave the Ravens a new set of downs at the Patriots 3 to an Adam Butler offsides in the second quarter, extending an eventual scoring drive to Julian Edelman’s fumble leading to a 70-yard touchdown return by Marlon Humphrey, the Patriots just couldn’t get out of their own way.

“There is really not much to say tonight,” Bill Belichick noted in a quiet and somber tone. “Obviously, we didn’t do anything normal, certainly didn’t coach well. Give them credit. They were better than we were tonight, certainly the better team. We all have to do a better job.”

Asked if there was anything specific that he didn’t have his team prepared for, Belichick said, “It’s obvious.”

What was obvious from the get-go was that the Ravens, coming off a bye, were much more prepared than the Browns to pinpoint weaknesses in the defense and execute accordingly. Namely, the Ravens were able to attack the Patriots with a running attack that stretched out the defensive line from sideline to sideline. With the Patriots conscious of Lamar Jackson, the Ravens countered by gashing the line of scrimmage with Mark Ingram to the tune of 115 yards, including a killer 53-yard run that led to a 12-yard touchdown run from Gus Edwards.

The Patriots fought back in this game the way they always do and appeared ready to take the lead to open the third quarter. Then Edelman’s fumble happened as Patrick Onwusaor punched the ball free and Marlon Humphrey was there to scoop and score.

The Patriots made their mistakes but they also might have found something just as valuable. In giving up on a traditional power run game with the tight end and fullback, the Patriots finally turned up-tempo on their second drive and had more success running from the spread with Sony Michel and James White, in very limited glimpses. That could be a big, big factor heading down the stretch as they desperately try to find a way to move the ball on the ground.

And in Mohamed Sanu, Brady has apparently found another reliable receiver to pair with Julian Edelman. With N’Keal Harry presumably ready to join the receiving corps after the bye, the Patriots should not struggle as much with the red zone as they have in the first nine weeks.

Still, the Patriots head into a bye with a losing taste in their mouth. That has always made them a little nastier. Now, they have this one to sit on for two weeks before taking on the Eagles in Philly on Nov. 17.

“Anytime you lose, it sucks,” McCourty said. “We’ll sit on this one for an extra week, but I think sometimes an extra week can be good. We’ll get to watch the film. When a team has success on you, you’re going to see some of those plays again. Nobody has Lamar Jackson, but we’d be crazy to think things that they did tonight, we won’t see again. So, it’ll be good as a defense and as a team to be able to get in-depth on some of the things that have hurt us throughout the season. We have to be mature enough to get better as a football team.”

McCourty has always offered the right perspective. For eight weeks, it was how not to let a win get in the way of the next game. Now, he and the Patriots defense have an extra week to sit on their first loss of 2019.

Dont’a Hightower, with his team down 17-0, was yelling at his teammates on the sidelines Sunday night. The message was pretty simple.

“Just to keep playing. When you’ve been playing games like we have the first couple of weeks of the season, and it’s been a smooth ride, we got guys who have been here a while,” McCourty told me. “We haven’t gone undefeated during a regular season. I think he was just telling the guys to just keep playing. A part of this game is character. Keep playing each down, even when the game is out of hand and it’s not going your way, you keep playing. That’s something you have to do every time you step on the field.”

As for whether the Patriots see Lamar Jackson and the Ravens again in the postseason, McCourty and Belichick were in total agreement: That’s not the focus right now. And it shouldn’t be.

“If it happens, it happens. For us, they’re not on the schedule,” McCourty added. “We have to just be ready to play the games we have left on the schedule to get to wherever that’s going to be. That’s more important than worrying about seeing them again. It’s us making sure we’re going to be where we want to be, and the rest will work itself out.”