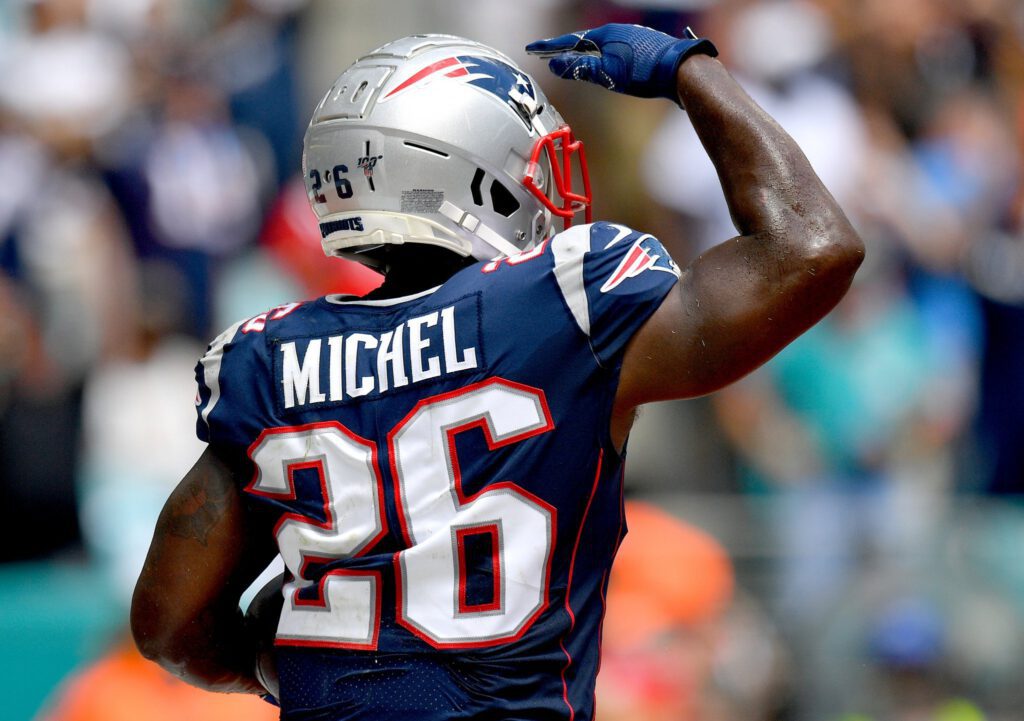 The Patriots rushing attack, especially 2018 first-round pick Sony Michel, is not off to a great start this season.

The Patriots rank 28th in rush average, 21st in expected points added per attempt and 17th in rush success rate as a team. Yes, they lose points every time they run (so do 20 other teams).

(via The Athletic’s Ben Baldwin)

Individually, Michel ranks at the bottom of the league in both EPA per attempt and rush success rate among running backs with at least 20 carries this season.

There are several reasons why the Patriots are struggling to run the football, starting with the blocking, ranking 24th in Pro Football Focus’s run-blocking team grade. Last season, New England ranked second-best in the metric.

With Michel, the Patriots are also predictable. They run 73 percent of the time with him on the field, and opposing defenses are picking up on the tendency, and loading up against Sony.

“Some teams have different game plans against us based on the back,” Belichick said.

Going back to the Super Bowl in February, the Rams had two different plans depending on the running back on the field for New England.

“When Sony Michel was in, it was often with the fullback [James] Develin, and the likelihood of a run was very high,” Sports Illustrated’s Andy Benoit wrote. “So, the Rams played their stouter base 4-3 defense. But if Burkhead or especially James White was in, the Rams played nickel.”

This season, opponents were in base defense with four defensive backs on 20 of Michel’s 45 rush attempts, according to Sports Info Solutions. For comparison, opponents are in their base defense on only 25 percent of Burkhead’s runs (six of 24).

Michel isn’t facing a high-volume of stacked boxes, only ten of his carries have come with eight-plus defenders in the box. But defenses are playing heavier run-stuffing fronts with him in the game.

The other side of the coin for the Patriots is the effectiveness of play-action with teams loading up and expecting run with Michel on the field.

In 20 pass snaps with Michel, 16 of those were play-action attempts, and Brady is averaging a ridiculous 16 yards per attempt while completing 11-of-13 passes on those play-action throws.

The Patriots gashed the Jets for gains of 41 yards, 25 yards (touchdown), 22 yards and 12 yards on play-action attempts with Michel on the field.

“I always consider those plays team plays,” said offensive coordinator Josh McDaniels. “If you’re going to try to give the defense a look and try to simulate something that you want them to react to, then all 11 players in some way, shape or form are very involved in trying to present that look to the defense.”

On the 41-yarder, the first component was tight end Ryan Izzo motioning into the formation, typically a run tell. The motion also gives Tom Brady a pre-snap indicator that it’s man coverage because Jamal Adams follows Izzo. The Patriots simulated a run by double-teaming with the left tackle and guard while Izzo engages the defensive end before releasing downfield. Adams thinks its a run and crashes into the backfield to blow up the play, but Izzo releases behind him and is wide open with the defense in man coverage. Michel also makes a great block to pickup Adams giving Brady time to find Izzo.

Later on, the Patriots scored a touchdown off of play-action with Michel on a 25-yard pass to Phillip Dorsett.

The Patriots motioned Izzo in tight to the formation again, but this time the corner doesn’t follow him, indicating zone coverage. They then simulate a duo run concept with two double-teams on the interior, Izzo staying in to block, Edelman simulating a crack block and some nifty ball-handling by Brady to simulate a counter handoff. The fake gets all three second-level defenders to fill against the run, and with Edelman releasing into the flat, he keeps the boundary corner away from Dorsett. Dorsett is wide open behind the linebackers and goes untouched into the end zone.

The analytics community has done numerous studies that debunk the theory that rush success and frequency make the play-action passing game more potent.

And studies also suggest that it’s more about formations and selling the run fake than the back in the backfield. So, it’s difficult to credit Michel himself for the success of play-action.

But teams are taking a different approach with Michel on the field personnel-wise and acknowledging how the Patriots keep you off-balance with play-action.

“I think Josh McDaniels may be one of the best offensive coordinators in the league, if not the best. Just does a great job of mixing things up, keeping you off-balance with play-action,” Bills head coach Sean McDermott told me.

As the weeks pass, the Patriots’ rushing attack, along with Michel’s production, will hopefully get better.

For now, though, the explosive plays they’re creating in the play-action passing game are a significant part of the success of their offense through the first three weeks of the season.

And the Patriots may be willing to sacrifice Michel’s efficiency for chunk plays through the air with teams selling out to stop the run.

After all, those big gainers are far more important to their bottom line, winning, than a potent rushing attack.