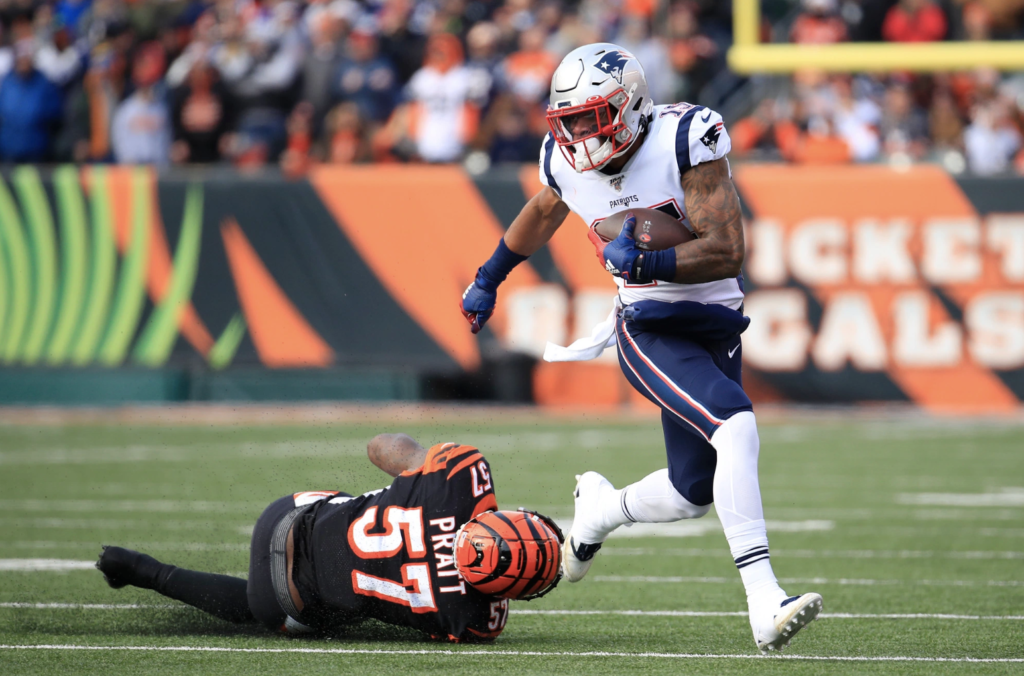 CINCINNATI — The Patriots got their wake-up call just in time Sunday.

Stephon Gilmore intercepted a pair of Andy Dalton passes, including a pick-6 of 64 yards, and Matthew Slater had a momentum-changing strip of a punt return as the Patriots avoided their first three-game losing streak since 2002 with a 34-13 win over the lowly Bengals. J.C. Jackson also intercepted a pair for the Patriots, who clinched a playoff berth for an 11th consecutive season.

The Patriots improve to 11-3 on the season while the Bengals, who started a firestorm with their taping of a Patriots videographer last week in Cleveland, fell to 1-13.

Tom Brady threw a pair of touchdown passes – one to James White and one to N’Keal Harry – to draw to within one of Peyton Manning (539) on the NFL’s all-time list. Click here for a complete box score.

The Patriots came out on fire, marching down the field on the game’s opening drive. Keyed by several chunk plays, including a 22-yard flare pass from Brady to James White in the left flat, the Patriots moved the ball down to the Cincinnati 23. On third-and-10, Tom Brady and the offensive line picked up a blitz and Brady hit White out in the left flat. Joe Thuney picked up a block at the 20, springing White free to run the rest of the way for a touchdown and a 7-0 Patriots lead.

But the Bengals responded by showing some bite of their own. Joe Mixon carried the ball five times to open Cincinnati’s first drive, including a 29-yarder to the Patriots 32 after several Patriots missed tackles on the edge. Four plays later, Andy Dalton hit Cethan Carter from 8 yards as Jonathan Jones slipped, allowing Carter to step easily into the end zone.

After the Patriots went 3-and-out, the Bengals strung together a nine-play, 49-yard drive, capped by Randy Bullock’s 34-yard field goal that gave the Bengals a 10-7 lead.

The Patriots, thanks to a great push from Danny Shelton, finally stopped Mixon when it mattered, stuffing the running back on fourth and inches at the Patriots 31. The Patriots used that momentum and converted it into a game-tying 40-yard field goal from Nick Folk.

The Patriots again got a huge play from Matthew Slater on special teams as the captain stripped the ball away from Alex Erickson as he attempted to field a Jake Bailey field goal at the Cincinnati 23. But for a second straight series, Brady was sacked on third down, this time by Carlos Dunlap and the Patriots settled for a 46-yard Folk field goal.

The second half opened with the Bengals in possession but that changed in just three plays as Dalton threw it right into the stomach of Stephon Gilmore, who was covering Tyler Boyd.

The Patriots were on the verge of settling for another field goal when Brady bought enough time in the pocket to find N’Keal Harry running across the back of the end zone from seven yards out and the Patriots suddenly led 20-10 with over 11 minutes left in the third quarter.

As the Bengals were using the legs of Joe Mixon to attempt a comeback, driving to the New England 36, Dalton telegraphed a pass to Boyd in the right flat and Gilmore undercut the route and raced 64 yards down the left sideline for a touchdown that make it 27-10 with 7:21 left.

J.C. Jackson added to the interception parade as he picked off Dalton on the sideline while covering Erickson.

The Bengals cut the lead to 27-13 on a Randy Bullock 48-yard field goal. But then instead of kicking deep, they tried an onside kick. Bullock’s kick traveled just 5 yards. The Bengals appeared to force a turnover on a Mohamed Sanu fumble. But the Cincinnati defense committed three fouls on the play, giving the Patriots the ball at the Cincinnati 33. Former Bengal Rex Burkhead took the snap on the next play and ran up the middle for 33 yards for a touchdown against his former team to make it 34-13 New England.

The Patriots did sustain a pair of significant injuries on both sides of the ball in the second half as Shaq Mason left with an ankle injury while Jonathan Jones was sidelined with a groin injury.

With a playoff spot now secure, the Patriots return home next Saturday afternoon at Gillette for a 4:25 p.m. game against the Bills.