Patriots pull Away From Lowly Redskins, 33-7, to Improve to 5-0 On Season 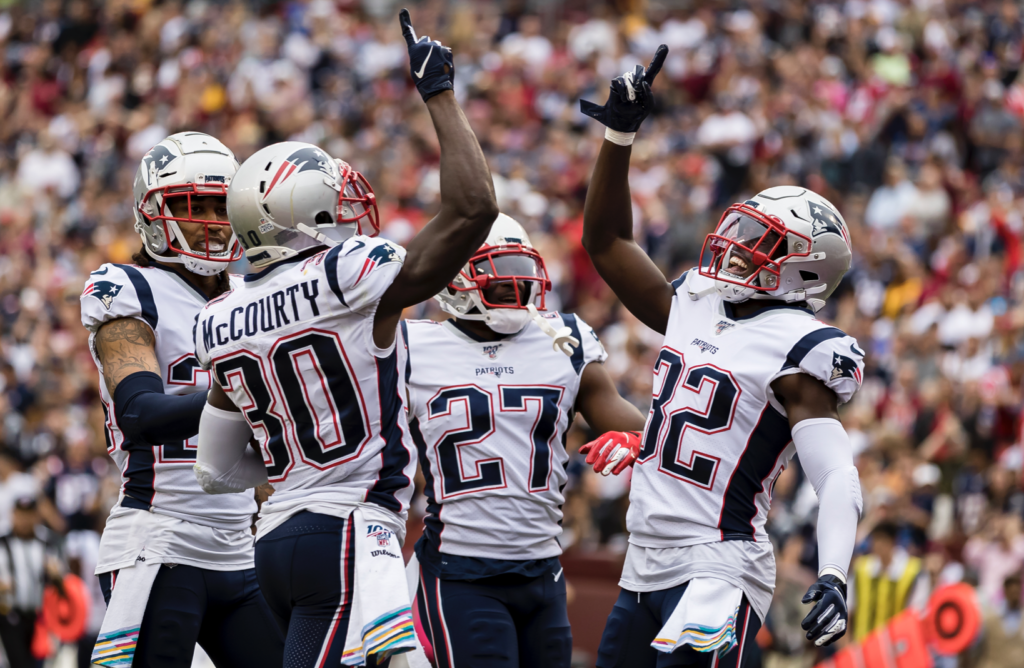 LANDOVER, Md. — As it turned out, the Patriots only needed to play one half of good football to beat one of the very worst teams in the NFL Sunday.

Brandon Bolden caught a touchdown pass to cap the first drive of the second half and Sony Michel ran in another to cap an 88-yard drive to highlight a 14-point third quarter and help the Patriots to a 33-7 win before tens of thousands of vocal Patriots fans at FedExField in Landover. Tom Brady threw three touchdown passes and the Patriots defense sacked an overmatched Colt McCoy five times on the day. For a full box score, click here.

The Patriots, playing before what was for all intents and purposes a home game, improve to 5-0 and now have a short week to prepare for rookie quarterback Daniel Jones and the Giants on Thursday night at Gillette Stadium.

The Patriots entered Sunday’s game having never trailed this season.

That changed thanks to sloppy tackling on Washington’s second drive when, on second-and-8 at the Redskins 35, the Patriots missed three chances to bring down Steve Sims. The Redskins wide receiver hit the edge on the right side and scampered 65 yards for a touchdown with 9:26 left in the first quarter.

The Patriots answered with a Tom Brady-to-Julian Edelman touchdown pass over the middle for six yards but Mike Nugent, in his first kick with the Patriots, pushed the extra point wide right.

The first quarter was the ugliest 15 minutes the Patriots had played this season.

With Rex Burkhead and Damien Harris inactive, the combination of James White and Michel were able to gain just one yard on the ground on three carries. That included a 2-yard loss on fourth-and-1 from the Redskins 22.

After pushing his first kick in a Patriots uniform wide right for the extra point after the Brady-to-Edelman touchdown connection in the first quarter, Mike Nugent connected from 37 yards to put the Patriots up, 9-7, their first lead of the game.

The injury bug once again hit the Patriots when wide receiver Phillip Dorsett left the game during New England’s first drive of the game with a hamstring injury and did not return. That left the Patriots with Julian Edelman, Josh Gordon, Jakobi Meyers and Gunner Olszewski as their receivers.

The first half was a display of horrid football on both ends. Redskins receiver Trey Quinn fumbled a pass completion which was forced by Jon Jones and recovered by Jamie Collins at the Washington 16.

Jon Jones is always around the football. He punches this ball free and Jamie Collins pounces on it. Big play by a defense that has made a ton this season. #Patriots. pic.twitter.com/S0AlQrwitl

But three plays later, Brady and the Patriots returned the favor.

With left tackle Marshall Newhouse letting Ryan Kerrigan rush unabated to the pocket, Brady threw off his back foot and heaved a prayer for James White. It was picked off by Montae Nicholson at the Redskins 1. The Patriots got another gift when Jason McCourty picked off Colt McCoy at the Redskins 11. The Patriots had to settle for a 23-yard Nugent field goal and a 12-7 halftime lead.

Back-to-back weeks with a red zone interception thrown by Tom Brady. Yes, he was pressured by Ryan Kerrigan, but that had a just chuck it up and hope for something good feel, taking potential points off the board. Brady’s gotta be better there. #Patriots pic.twitter.com/wW4plUlMgh

New England had the ball to open the second half and immediately changed the tone of the game by running the ball. Four of the first five calls were runs for Sony Michel, totaling 21 yards. Brandon Bolden also ran the ball for four yards. Then on the final play of the drive, Brady lofted a ball for Bolden down the right sideline. Bolden caught it for a 29-yard touchdown.

On their next possession, Michel ran it three more times, for 39 yards, including a 14-yarder off the right side to put the Patriots up, 26-7.

Dont’a Hightower was all over the field defensively, recording 1.5 sacks and forcing several pressures of overwhelmed Redskins quarterback Colt McCoy.

Brady threw his third touchdown pass of the day to an uncovered Ryan Izzo in the back of the end zone with 9:14 left to make it 33-7. Jarrett Stidham got his second stint replacing Brady in a blowout with six minutes left.