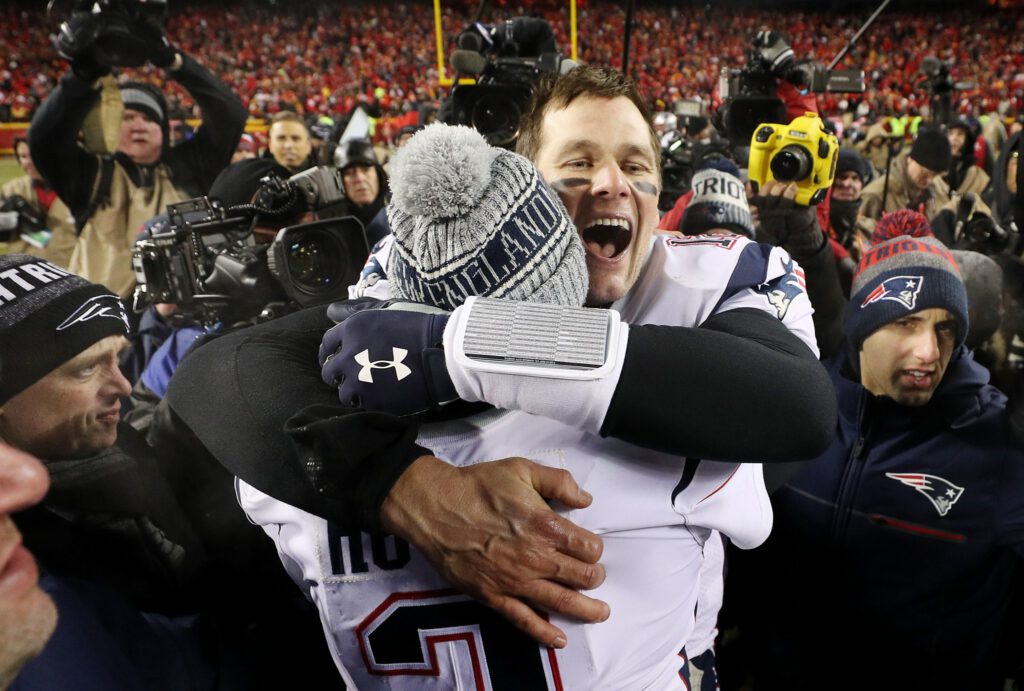 FOXBOROUGH — The relationship between the starter and backup quarterback can go one of two ways; they either resent each other or work together for a common cause.

Sure, it helps that backup Brian Hoyer isn’t threatening Tom Brady for his starting job, but the two have formed a bond that began during Hoyer’s first three years in New England and has grown considerably since his return.

“I lean on him for a lot of things, and he’s a great friend,” Brady said during the Patriots’ Super Bowl bye week. “He’s just a great teammate to have, not only his role in his position, he always just has a great understanding of what we do.”

“I’ve always just really enjoyed my time with him. He’s got a great mannerism about him. He’s very positive. It’s really great for me to have him here because he’s always encouraging.”

In his second stint with the Patriots, Hoyer has become a second set of eyes in many ways for Brady when it comes to studying opponents and the finer details of the quarterback position.

“Far more than when I was here the first time because I didn’t know anything,” the 33-year-old Hoyer said of sharing notes with Brady in the Patriots’ quarterback room.

“Since I’ve gone away and played a lot of football, I think he values my opinion. He respects what I have to say. Whereas before I would just shut up and let him do his thing.”

“Now, if I see something, I don’t hesitate to voice it like ‘hey, maybe think about doing this’ or ‘don’t forget to do this’ or ‘hey, I saw this play against whoever’ and it’s a great relationship. We’ll text each other ‘hey, check out this play against so and so, play number 34’ or whatever it might be, and it’s a great relationship because all we want to do is win.”

Although Hoyer is more vocal now, the Pats’ QB two said that he was always close with Brady and things remained that way even when Hoyer left New England from 2012 to 2016.

“For me, I have the unique experience of starting my career here, learned a lot from him, and then played in a lot of different places and always stayed in touch with him,” he said. “He was always a big supporter of mine, and we always stayed friends.”

“I’ll never forget the night I tore my ACL one of the first messages I got was from him, and when I had my first win, same thing. Actually, when I was going through free agency last year, I consulted in him. Oddly enough, I ended up back here.”

Brady hinted at those conversations as well saying, “we’ve obviously had a long friendship, and we’ve hit it off since he got here and then he left for a bunch of years, and we always kept in touch. It’s just been great to have him back.”

The Patriots signed Hoyer, who is eight years younger than Brady, as an undrafted free agent following the 2009 NFL Draft, but the Michigan State product left New England for five seasons before returning after the Jimmy Garoppolo trade in November of 2017.

This time around, Brady and Hoyer are both fathers and husbands. In similar stages of life, they’ve grown even closer as friends off the field.

“Our relationship has been awesome since I’ve been back,” Hoyer said. “We are in similar life stages now; we are older, he has kids, I have kids, but when I was first here, I was eight years younger than him, and there was a vast gap. I was still not married, still living a different life and now we live very similar lives I would say, so that brought us even closer together.”

“I’ve always said this when anyone asks me about Tom, and this is the God’s honest truth,” Hoyer continued. “We are all lucky enough to see how great of player he is but I’m lucky enough to see how great of a person he is, and I think everyone in this locker room gets to see that. How humble and passionate he is, so for me it’s always fun to come in and work beside him.”

“He’s really a great person. He’s a great dad, a great family-man and again, I just love kind of hanging with him. He’ll always be a great friend,” Brady said of Hoyer.

Even though they’re friends off the field, and Brady is the unquestioned starter, that doesn’t mean the two don’t compete on the practice field.

“We are always challenging each other in throwing drills or who can throw better,” Hoyer said while walking me through a series of accuracy competitions he has with Brady at practice.

And as you’d expect, the five-time Super Bowl champion doesn’t like losing to Hoyer or anyone for that matter.

“I do [hate losing to Hoyer], and he beats me a lot, unfortunately,” Brady said.

Friendships between teammates, especially when it involves the starting quarterback, can be overblown.

But its genuine between these two, and we all saw it after Rex Burkhead crossed the goal line to send the Patriots to the Super Bowl in last Sunday’s AFC Championship Game.

Brady threw off his helmet and jumped into the arms of linebacker Kyle Van Noy, but it was Hoyer that was there to greet Brady almost immediately, and the two shared in the moment.

“It was incredible because of the back and forth, but the focus that he kept, and I’ve been able to see it time and time again and to come out on top of that one it was just that much sweeter,” said Hoyer describing the victory celebration.

Even though it’s Brady making the throws, the two work together every week towards a common goal: win.