Patriots Quest for Tom Brady’s Replacement Will Have to Wait 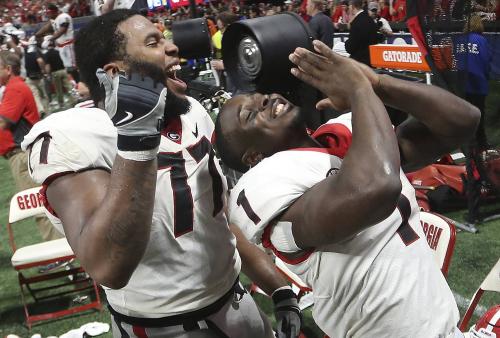 So about that brand new Patriots Quarterback….

Which Quarterback were the Patriots going to select in this year’s NFL Draft to be Tom Brady’s eventual replacement? Would it be Quarterback Josh Rosen who slipped all the way to 10? Or perhaps Quarterback Lamar Jackson who was available when the team picked at 23 and again at 31? So many Quarterback to choose from, no doubt one of these Quarterbacks would be selected by the Patriots because after all, Quarterback Quarterback.

No? Ok then if not a quarterback surely one of the other pressing needs the team has like tackle, edge rusher or linebacker?

The Patriots were so high on Lamar Jackson they passed on him twice to take a guard with a bad labrum and then a running back because they only had five of those under contract.

With the 23rd pick in the NFL draft the Patriots selected a guard (who has played some tackle) Isaiah Wynn from Georgia. And with the 31st pick the Pats took running back Sony Michel, also from Georgia.

And a running back? In the first round? A position that has been devalued throughout the league? One that the Patriots don’t place a premium on and typically employ a committee, no wait more of a community approach to? Mmhm, that’s what they did.

But what about their NEEEEEEEEEDS?!?

If you haven’t figured it out by now the Patriots don’t do drafts like everyone else. The most predictable thing they do is to be unpredictable. They take players they like – regardless of positional need – from programs they like, recommended by coaches Bill Belichick trusts.

“First off, both players, they come from a great program,” Director of Player Personnel Nick Caserio said after the conclusion of round 1. “With a lot of respect, a tremendous amount of respect for coach (Kirby) Smart and the job that he does, he’s doing at Georgia and the job he did at Alabama.”

Ding! Ding! Ding! There it is. Smart was an assistant under…..wait for it…..Belichick’s bud and collegiate kindred spirit Alabama head coach Nick Saban from 2007-15.

“Both of these players, they’re playing against some of the best players in the country on a weekly basis and they were productive players,” Caserio said.

The Patriots loves them some ‘productive’ players.

In addition to not filling an immediate need both these players also come with some injury risk. Wynn had labrum surgery in August, while Michel has a much more concerning injury history.

Wynn had labrum surgery in January. Says he should be good to go for minicamp. @tomecurran points out he won’t be allowed to answer those types of questions much longer.

The Georgia RB tore his ACL tear in 2011, fractured a shoulder-blade in 2014, broke his arm in an ATV in 2016 and has a knee injury which some reports suggested is “bone on bone.” The Patriots apparently weren’t concerned and neither was Michel.

"I'm healthy." Sony Michel on his knees and the reports of bone-on-bone injury

Both players may be great. Scouts gushed about Wynn’s technique and positional versatility. Some think he could be a tackle at the next level – and perhaps replace the departed Nate Solder – even though he’s more the size of a prototypical guard (6′ 2″, 315 lbs.)

And Michel a potential home run hitter was compared by NFL Network guru Mike Mayock to Saints explosive rookie Alvin Kamara. That would be good.

At this point every player is a potential star and each comes with risk. What you want are good football players. Who cares if you failed to address a supposed need by passing on the future Adrian Klemms and Dominique Easleys of the world if you end up with a Logan Mankins or Curtis Martin? If after all these years as a Patriots fan you haven’t learned to ‘trust the process’ then you may need another hobby.

Besides, the Pats have two more picks in round two where they can address quarterback, or linebacker, or edge rusher.

Just don’t bother trying to guess what they’ll do, and try not to freak out when they go placekicker, safety.