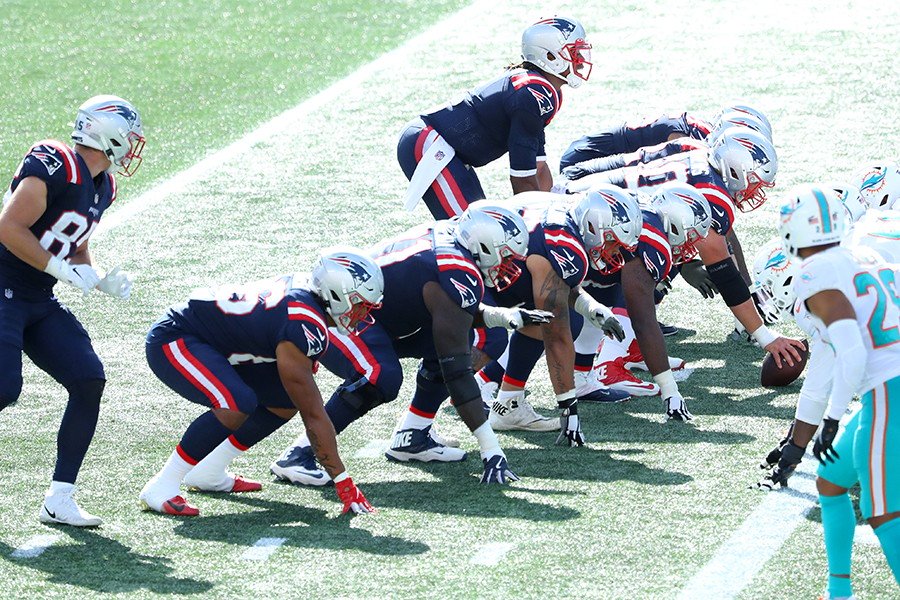 Patriots rookie Michael Onwenu was a three-year starter with over 2,500 collegiate snaps, yet in his NFL debut last Sunday, he played tackle for the first time since High School.

Onwenu, a sixth-round pick from the University of Michigan, was a surprise standout among New England’s rookie class in Week 1.

Despite only playing guard in college, the roughly 340-pound Onwenu played 16 snaps at right tackle and six more at tight end in an excellent performance, especially considering the circumstances.

Rookies had a month of practices with no preseason games to prepare for the regular season, but that didn’t stop Onwenu, who finished Sunday’s contest with a 75.4 overall grade from Pro Football Focus, second-best among rookie offensive linemen. In 16 snaps at right tackle, Onwenu only allowed one hurry and was dominant at times as a run-blocker.

“Personally, I did okay. There’s always room for improvement. So you know, watching the film, and watching the tape, you know, I’m always (looking) at my technique, there’s always stuff I can improve, whether it’s as an extra lineman or at right tackle,” Onwenu added.

Belichick said Solder’s rookie season serves as a blueprint for Onwenu, who, behind starting guards Shaq Mason and Joe Thuney, needs to find creative ways to get on the field. Solder, of course, was behind tackles Matt Light and Sebastian Vollmer as a rookie in the 2011 season.

“Mike’s a very flexible player. I don’t think he’s played tackle since high school, but he played a number of positions for us in training camp – guard, tackle, we saw tight end there in the game yesterday,” Belichick said earlier this week.

“Mike’s earned playing time, and he’s been able to play different spots for us. Right now, our two guards are pretty established players, and they played well. If we can find a way to utilize our personnel productively, then we’ll try to do that.”

“Even though he doesn’t have a lot of experience there, he learns quickly and is able to utilize his skills to be productive,” Belichick concluded.

The Patriots are no strangers to finding productive offensive lineman late in the draft. Mason was a fourth-round selection, center David Andrews went undrafted, and former right tackle Marcus Cannon was a fifth-rounder for New England and all blossomed into starters.

However, it was a major surprise to see Onwenu, who was labeled slow-footed and heavy by draft experts, play at right tackle and as a sixth offensive lineman in jumbo sets rather than on the interior.

Onwenu focused on dropping from his college playing weight of nearly 380 pounds down to a slender 340 pounds now that he’s in the Patriots’ strength and conditioning program.

The weight loss is paying off as Onwenu showed some impressive explosiveness to mirror pass rushers and make climbs to the second level to combine with his immense play-strength.

On his very first NFL snap, Onwenu was already moving defenders backward without the benefit of a preseason warmup. The Pats brought him in as an extra offensive lineman and ran behind a great combination block off the left side. Onwenu gives defensive end Shaq Lawson a jolt to help left tackle Isaiah Wynn turn Lawson inside, then climbs to former Patriot linebacker Elandon Roberts, who he shoves to the ground after Roberts begins to lose his balance.

New England started a game in which they ran for over 200 yards by running behind Onwenu, and they put the game on ice by calling on him again as an extra blocker late in the game.

The Patriots deployed “14” personnel, or what we’ll refer to as their “hippo” package, where they bring in two more offensive linemen to steamroll their opponent at the line of scrimmage.

The University of Wisconsin deploys a similar “hippo” grouping. It stresses the defense’s ability to plug each gap with nine players on the line forming nine gaps to fill defensively.

In the Patriots’ version, they have four blockers to each side of the center, meaning they can go in either direction with equal numbers, choosing which area to attack based on the defense’s alignment.

The Pats gained 11 yards on second and ten by running Cam Newton on a quarterback power scheme with Jakob Johnson also leading the way at fullback. Newton calls out the run to Onwenu’s side when the Dolphins leave him uncovered with a linebacker off the line in the open bubble. Newton makes a strong move in the backfield to make a defender miss, then gets behind a moving barricade with Onwenu blowing his man off the ball and Mason pulling to the MIKE linebacker; that’s some movement.

Although Onwenu is known for his people-moving blocks, his reps in pass protection were more impressive given his perceived strengths as a player.

On this rep, Onwenu is blocking Dolphins pass-rusher Emmanuel Ogbah on an island. Ogbah had 5.5 sacks and 11 quarterback hits with the Chiefs last season and is no slouch. Onwenu starts by getting good depth out of his stance to force Ogbah to play through his chest. He then uses a “flash” technique to show his hands to get Ogbah to get into his pass-rush move before pulling them back to get Ogbah off-balance. Ogbah tries to soften the edge with a “cross chop” move, and Onwenu uses active hands to limit its effectiveness. Newton goes down for a sack on the play, but that’s not on Onwenu. He does his job to “run the arc” and push Ogbah past the quarterback.

The Patriots leaned on their new-look rushing attack in their win over Miami. With Onwenu at either right tackle or tight end, he adds another bulldozer to an already sturdy offensive line.

Those outside the organization might’ve expected top picks such as safety Kyle Dugger or tight end Devin Asiasi to play the most and make the biggest impression in their rookie debuts.

However, it was no surprise to his coaches and teammates that Onwenu was the guy who made an instant impacted.

As is often the case with the Patriots, it was a sixth-round pick out of Michigan that stole the show.