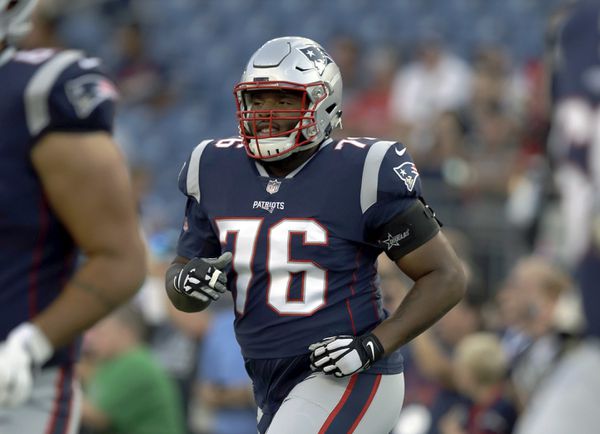 This is part five of a position by position roster preview ahead of Patriots training camp.

Cannon – Cannon is getting up there in age turning 31 years old in May, but he’s still an above-average starter at right tackle. In 2018, Cannon only allowed 15 quarterback pressures in the Patriots’ last ten games including the postseason. And he’s also a premier run blocker with the sixth-lowest blown block percentage among tackles, according to Sports Info Solutions.

Mason – Mason’s 15.0 run-blocking success rate was the second-best among all offensive linemen in 2018. After signing a five-year extension, the Pats right guard also had a breakout season as a pass blocker allowing a career-low 16 quarterback pressures. Mason came in at number six on my “top ten most important Patriots” list.

Andrews – the captain and pivot man of the Patriots’ offensive line, Andrews has quietly gone from undrafted rookie to one of the best centers in football. Andrews ranked seventh and fifth respectively among centers in blown block percentage in pass protection and the running game last season, according to Sports Info Solutions. Along with keeping this group organized, Andrews continues to deliver solid play for the Patriots.

Thuney – one of the most underrated offensive linemen in the NFL, Thuney posted the lowest blown block percentage among guards with at least 350 pass snaps a year ago (source: Sports Info Solutions). We all saw what Thuney can do when he shut down Defensive Player of the Year Aaron Donald twice on the Patriots’ game-winning touchdown drive in the Super Bowl, and people around the league took notice as he enters a contract year.

Wynn – as most of you know, Wynn missed his entire rookie season after suffering an Achilles injury last August. However, if we go back to his days as a Bulldog, the 23rd overall pick in the 2018 draft only allowed five quarterback pressures on 328 pass blocking snaps in the best conference in college football. Yes, that’s college ball, not the pros, but Wynn has sound technique and the necessary foot speed to play tackle at the next level. Until we see him in action, we’ll hear all about is lack of size and experience for such an important position. But there’s no denying his talent.

Cajuste – another young tackle prospect for the Patriots, Cajuste could start the season on injured reserve or the PUP list due to a quad injury. The Patriots are thin at tackle, but it wouldn’t surprise me if Cajuste redshirts the season to get healthy. On the field, the West Virginia product has a nice blend of skills with good athleticism and above-average upper body strength; his hands are weapons that need some polishing by Dante Scarnecchia. Cajuste will have to get used to NFL pass sets which are much deeper in the pocket than what he was doing in West Virginia’s air raid scheme, but I loved his college tape.

Froholdt – the one Pats selection that took me by surprise was Hjalte Froholdt out of Arkansas. The Patriots are loaded in the interior of the offensive line, but once you turn on Froholdt’s tape, it’s not surprising that Belichick and Scar fell in love. Froholdt has the ability to play all three interior spots with excellent size for the position and was one of the best pass protectors on the interior in college football last season posting an SEC-best 99.4 pass-blocking efficiency rating. His feet routinely hit their landmarks, he can transition his weight with ease and he has excellent core balance. In many ways, he reminds me of a young Joe Thuney.

Biggest question: will Isaiah Wynn be ready to play left tackle in Week 1?

Arguably the biggest question that needs answering for the Patriots during training camp is who will start at left tackle in Week 1? Wynn should be ready to go for the start of camp, but he’s essentially a rookie with only eight preseason snaps and a few weeks of NFL practices under his belt. The Patriots used Joe Thuney at left tackle in minicamp, and Thuney has experience there from his college days, but it’s in everyone’s best interest to keep him at guard. Although, it wouldn’t worry me if Thuney is the answer in the short-term with steady backup options such as Ted Karras, Brian Schwenke and possibly Froholdt at left guard. Ideally, Wynn takes the position by storm and gives the Patriots their best five (from left to right): Wynn, Thuney, Andrews, Mason, Cannon.