Patriots Roster Reset: Do the Pats Have Enough Big Bodies on the Defensive Line? 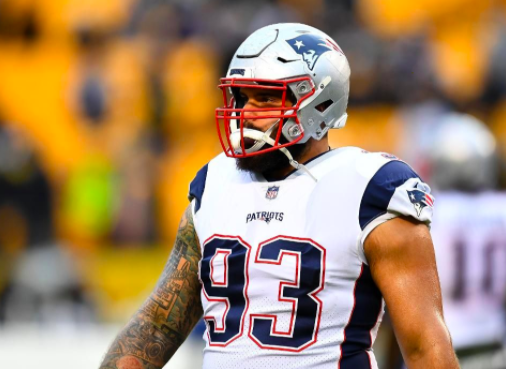 Playing defensive line in Bill Belichick’s defense is not the glamorous stat-padding position that other schemes present for their defenders in the trenches.

Defensive linemen are there to occupy blockers as two-gapping run stuffers and pass rushers that free up their teammates to make plays near the line of scrimmage.

Belichick relies on scheme to generate pressure on opposing quarterbacks rather than investing in pass rushers that can win one-on-one battles against offensive linemen.

#Patriots defensive tackle Adam Butler is very underrated. He might not show up in the box score but he's in the middle of all the pass-rush scheming the Pats do up front, often opening up lanes to the QB for his teammates. pic.twitter.com/P9cbGM8Aix

New England runs a heavy dosage of line stunts where defensive linemen set picks for their teammates to put pressure on the quarterback. Like a pick-and-roll in basketball, the idea is to get a clear path to the passer (or basket). Over the last two seasons, the Patriots lead the league in unblocked quarterback pressure due to these schemes, per Pro Football Focus.

The Patriots will also dial-up cover-zero blitzes to generate pressure. Last season, the Pats played the third-most snaps in the league in a cover-zero structure (no deep safety).

As a result, the Patriots prioritize investing in their elite secondary rather than forking over market value for pass rushers, which is why Belichick let Chandler Jones, Trey Flowers, and Kyle Van Noy go for lucrative paydays elsewhere.

Pro Football Focus dove into the coverage versus pass rush debate and found that, “teams with elite coverage and a poor pass rush win, on average, about a game and a half more than teams with the reverse construction.”

Although Pro Football Focus admits the debate doesn’t end there; statistically, Belichick is correct in thinking that teams should invest more money in coverage than pass rush.

Looking at New England’s depth chart at defensive line, the one concern from this perspective is that they’re still one big-body run defender short for early-down work in their odd front base defense.

Fourth-year pro Adam Butler and Wise are valuable pass rushers but are still developing as run defenders to expand their roles to all three downs.

The Patriots are 28th in spending at the position waiting until undrafted free agency to address the defensive line outside of signing Allen, with 2019 fifth-round pick Byron Cowart as their lone draft choice in the last two years.

Assuming there is training camp this summer, the focus in the trenches should be on who gets first-team reps as the third defensive linemen in New England’s base defense.

Below are scouting reports on all nine defensive linemen currently under contract with the Patriots:

Guy found a home playing mostly as a five-technique (over the tackle) defensive end for the Patriots. One of the most underrated interior defenders in the NFL, Guy ranked fifth last season in run-stop percentage at his position (10.4). He wins by playing with excellent technique, intelligence, and pad level to park himself in gaps, take on double-teams, and use his upper-body strength to shed blockers. Guy comes off the field in some passing situations, but he’ll also get involved in New England’s line stunts and had a career-high three sacks last season. His style of play won’t garner national attention, but Guy is one of the best players on the Patriots roster.

Wise is the lone player out of this group that can consistently win a one-on-one as a pass rusher during game action. Last season, he led all interior defenders in pass rush win rate (24.8) and pressure percentage (23.1) among those with at least 100 pass-rush snaps, even better than Aaron Donald. Wise uses violent slaps and jabs to beat blockers with excellent hand usage, allowing him to create separation with his length. He has the body type at 6-foot-5, 275 pounds with over 35-inch arms to be an effective two-gapper against the run, and he has taken coaching from both the coaching staff and teammates to make improvements, but he still plays too high. Wise needs to keep his pads down and use his strengths (hand usage, length) more effectively to become a complete player.

Chase Winovich also makes the plays that don't show up in the box score. He eludes the TE with swim move and meets the fullback in the backfield. Forces the RB to bounce to the outside. Solid push by #92 Nick Thurman also. #Patriots pic.twitter.com/n3u2qkBgfA

Thurman spent the 2019 season on New England’s practice squad after he was released on cut down day at the end of camp. He showed flashes of pass-rush skill during one-on-one’s last summer with an effective rip move, and he is a wide body on the interior, but he has yet to appear in an NFL game in two seasons. Thurman also doesn’t have much experience on special teams, which makes it challenging to make the team as a backend of the roster player.

Coe has the body type and strength to take on blocks and hold things up. Guard steps to him and Coe anchors, separates with his length, & clogs the middle. pic.twitter.com/69NADyBL6i

One of our early-favorites to make the initial roster as an undrafted rookie, Coe was a draftable talent that landed in New England as a UDFA due to minor character red flags. Some Auburn coaches questioned Coe’s commitment when he was often tuned out or asleep during meetings. The 6-foot-5, 280-pound versatile edge defender has plenty of talent and upside if Belichick can motivate him. Coe played all over the Auburn defensive line from an A-gap defender to outside linebacker in a two-point stance. He has the power and length to effectively hold his ground at the point of attack, which should translate well into New England’s two-gapping system. As a pass rusher, he’s a little stiff, but again, he uses his length to jab at tackles and soften the edge. Coe could get a chance as the third interior defender in the Patriots’ defensive front if he can remain focused.

#TechniqueThursday via Patriots DT Adam Butler using body positioning, leverage, & timing as the penetrator on a stunt to knife through his gap pic.twitter.com/sDb5HgiLdf

There’s a strong case that Butler is the most underrated player on the Pats roster, which is why Belichick placed a second-round restricted free agent tender on him this offseason. While playing a selfless role as a block eater in pass-rush situations, Butler was among the league-leaders in double-team rate among defensive tackles. Butler’s technique as the penetrator on stunts routinely occupies multiple blockers, clearing out rushing lanes for his teammates to get after the quarterback. Although he doesn’t show up on the stat sheet that often, Butler excels in his role, and the team is well aware of his value to the defense.

Beau Allen had a solid 73.9 grade vs the run last year, per @PFF. Leverage, upper-body strength and gap discipline here. Indy runs a counter. Allen does well to stay in his gap and not over-commit to the ball. Shaq Barrett forces the RB to cut back, and Beau is there. #Patriots pic.twitter.com/pjllxk0GC8

The Patriots swapped nose tackle Danny Shelton for Allen this offseason to find a better scheme fit. Although Shelton is a mountain of a man, he is at his best when he’s penetrating the line and vertically getting up the field. Allen, on the other hand, is more of a gap-plugger that can post up effectively in the trenches and two-gap. Allen will need to learn a new system coming over from an even front defense in Tampa Bay, but he’s a good fit at nose tackle. Hopefully, he will have better luck learning the Pats defense than a similar player in Kansas City’s Mike Pennell, who was signed to fill a similar role last offseason but didn’t stick in New England.

Cowart only played 43 defensive snaps as a rookie learning behind veterans on the defensive line. Last August, the former number one recruit in the nation out of High School made the 53-man roster thanks to eye-popping play strength and bull-rushing abilities as a pass rusher. Although he’s a raw run defender, his power at the point of attack flashed there as well by knocking back blockers to penetrate the line of scrimmage. Cowart’s technique as a run defender is extremely unrefined after being used sparingly in that role during his college days. Still, the baseline tools are there for him to develop into a stout all-around player. The only thing holding Cowart back from a more significant role in his second season is inconsistent pad level and body control. He’s got so much aggression and plenty of athleticism to get off the ball, but he needs to learn how to harness that and play with better gap integrity. In a 3-4 front, Cowart could be a candidate to play defensive end and become that third early-down run defender.

#Patriots UDFA Bill Murray has a cool name, plays with some impressive aggression and play strength. Great job here leveraging his strike into the right guard, gets off the block with arm extension and hand power, and makes the TFL. pic.twitter.com/3GgOeGrily

William and Mary might be an FCS school, but Murray’s career stat line there was ridiculous: 19.0 sacks, 32.0 tackles for loss, four forced fumbles, two fumble recoveries, and ten blocked kicks. Murray plays with a never-ending motor and dominant, at least at the FCS level, play strength. He has the upper body power to post up as a two-gapper while chasing down ball carriers with impressive hustle at 6-foot-4, 300 pounds. Plus, Murray’s knack for blocking field goals gives him an avenue to get on the field, as playing in the kicking game is a must for a rookie at the backend of the roster. We’ll see if Murray’s strength on defense translates after the jump in competition, but he’s more than an infectious personality with the same name as a famous comedian.

Wallace joins college teammate J’Mar Smith in New England after both Louisiana Tech products signed as undrafted free agents with the Patriots. Wallace battled injuries during his time with Bulldogs but accumulated 8.5 tackles for loss and two sacks in his lone season as a starter in 2019. He’s more of an undersized, athletic defensive tackle type at 6-foot-2, 305 pounds showing adequate flexibility and lateral movement skills to make plays behind the line of scrimmage. But play strength is a concern. Wallace will have an uphill battle to make the roster.