Patriots Roster Reset: State of the Patriots After Two Weeks of Free Agency 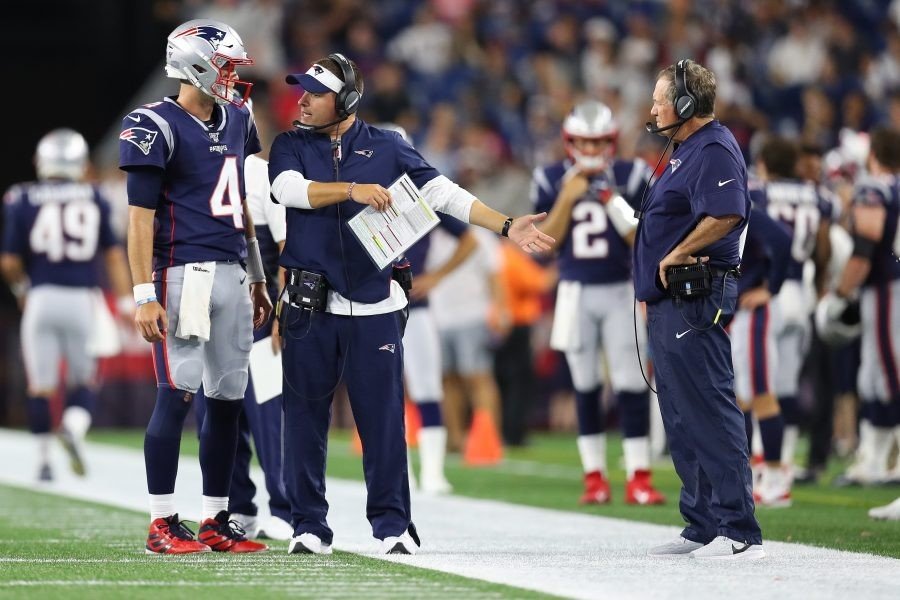 The Patriots are having a typical offseason outside of losing quarterback Tom Brady.

Although we understand the irony, the departures outside of Brady were all expected with linebackers Kyle Van Noy and Jamie Collins receiving big pay-days elsewhere, among others.

And Bill Belichick surprised us when he used the franchise tag to retain left guard Joe Thuney.

Still, mostly due to Brady, the Patriots currently lost the most wins this offseason according to Pro Football Focus’s improvement index based on their wins above replacement metric. 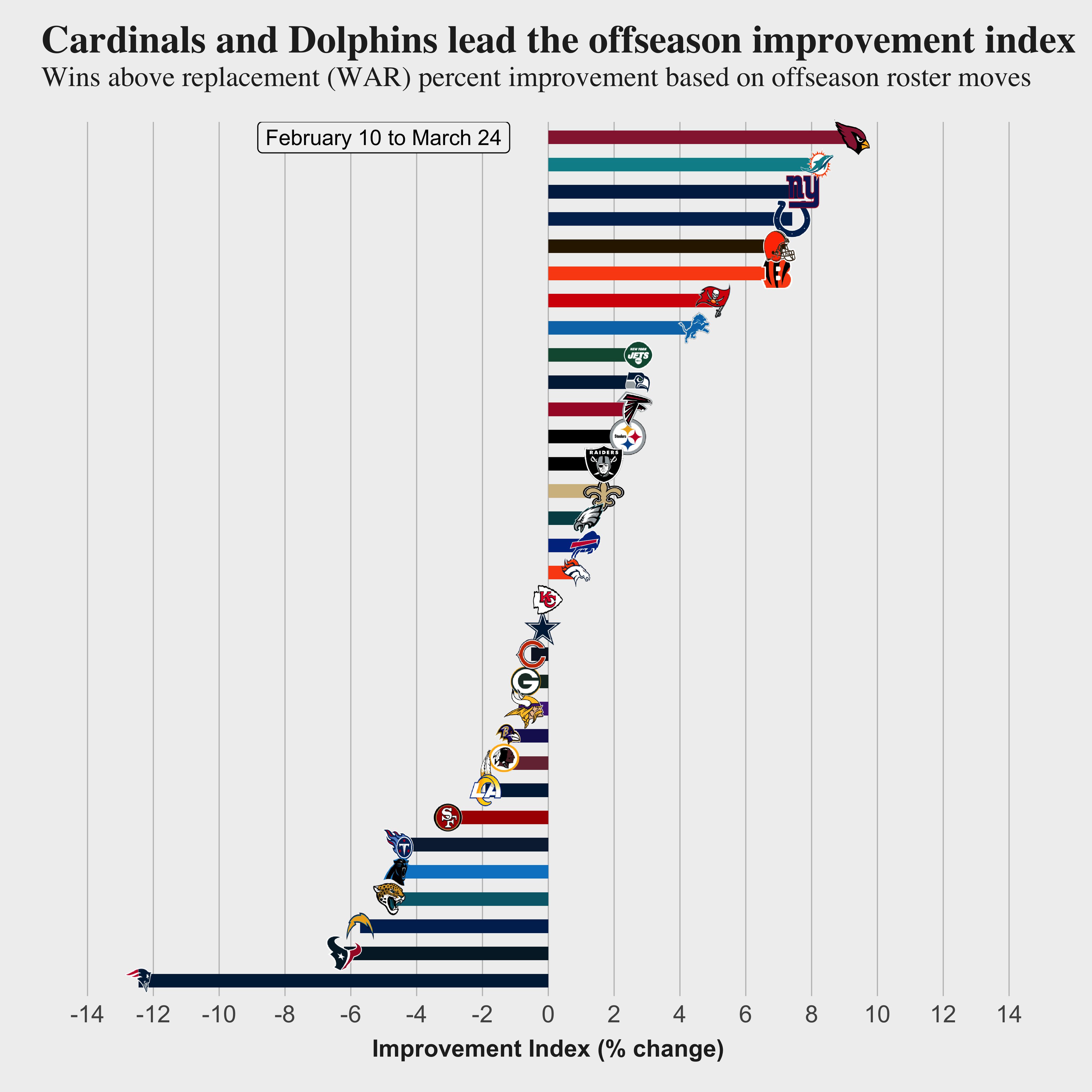 The improvement index is the percent gain (or loss) in WAR for each team during the offseason, and the Patriots are currently last at minus-12.5, over double the next closest team (Texans: minus-6.2).

New England finds itself in uncertain times without ample cap resources to make franchise-altering moves that will help lessen the blow from Brady’s departure to Tampa.

With 67 players under contract, the Pats are tight against the cap with a shade over $800k to spare, according to cap wiz Miguel Benzan (@PatsCap). With so little wiggle room, they’ll need to clear cap space to pay their draft class and account for in-season roster moves.

The Patriots have so little cap space because, first, they have nearly $26 million in dead money on their cap, which includes $13.5 million for Brady and $4.75 million for Antonio Brown.

New England also has a league-high 37 players with a cap hit of at least $1 million as they prioritize depth, per Benzan. Plus, Stephon Gilmore ($18.7 million), Joe Thuney ($14.8 million), and Dont’a Hightower ($12.4 million) are among the highest-paid players at their positions.

The bill for the dynasty came due with Brady’s voided years on his final Patriots contract and several salary conversions for Gilmore and others propping up their cap.

By seeking immediate relief, the Patriots kicked the can down the road with several players. The result was another championship, but now they’re here.

As we reset the roster, we’ll discuss ways to clear cap space, potential targets that fit their needs, and where things stand at each position:

The Patriots are unlikely to add another veteran to their quarterback room after signing Brian Hoyer; there’s no room for Cam Newton, Jameis Winston, or Andy Dalton, and signing one of those three would signal a change of heart. The team is progressing with Stidham as the likely starter next season, but he shouldn’t deter them from selecting a quarterback in the draft. We are all on the Jarrett train, and you can read my in-depth film review of Stidham’s game here, but if an upgrade is possible, you need to upgrade at the most important position. After studying this draft class, I’d take the following quarterback prospects over Stidham: Joe Burrow (will be no. one pick), Tua Tagovailoa (will be top-five selection), Jordan Love, and Justin Herbert. I’d also welcome a competition between Stidham and Washington’s Jacob Eason. The rest, such as Jake Fromm or Jalen Hurts, don’t present potential upgrades over Stidham.

The Patriots have everything from between-the-tackles backs (Michel, Harris, Burkhead) and pass-catching backs (White, Burkhead) as well as veteran special teams ace Brandon Bolden. With that kind of depth, a young quarterback, and a great offensive line on paper (returning five starters), the Patriots could run the offense through their running backs. Although it seems unlikely due to the teams’ feelings on the player, a Burkhead trade or release would save roughly $2 million in cap space. The running back depth chart is one of the best position groups on the roster.

New England will have a camp battle at fullback with two viable options behind Pro Bowler James Develin. Develin is progressing towards a return after neck surgery shortened his 2019 season, but still needs clearance for football activities. With Develin coming off a severe injury, the Pats could carry multiple fullbacks, as schematically, they like the advantages a lead blocker gives their rushing attack. The Pats lost two layers of depth a year ago, forcing them to use linebacker Elandon Roberts in an emergency role.

The biggest hole on the Patriots roster is still a difference-maker outside of Julian Edelman in the passing game. New England has decent depth at wide receiver, but they lack a second stud. Harry hopefully makes a leap in year two, but with a loaded draft at wide receiver, the Pats should add another talented prospect rather than reach on a less-talented tight end. If you’re looking at first-round possibilities, LSU’s Justin Jefferson or Baylor’s Denzel Mims top of our wish list. Reuniting Harry with college teammate Brandon Aiyuk is another intriguing option at the top of the draft. The Patriots can also save roughly $6.5 million in cap space by trading or releasing Sanu, who could also take a pay cut to remain with the team.

The thinnest and most dire position group, the Patriots are no better off at tight end than they were a year ago. New England passed on the big-name free agents, and as mentioned earlier, the draft class at tight end is underwhelming. Notre Dame’s Cole Kmet and Dayton’s Adam Trautman are intriguing in-line prospects with all-around skill sets and are the best this class has to offer.

Currently, I have Kmet ahead of Trautman as the top tight end in the draft. But it’s very close, and both should be off the board by the end of the second round.

Cincinnati’s Josiah Deguara and UCLA’s Devin Asiasi are potential sleeper choices. Thadd Moss, Randy Moss’s son, is an excellent early day-three blocking tight end prospect. But if they want a receiver that could make an immediate impact, they’ll need to draft another wideout.

The Patriots are in decent shape at offensive tackle with Wynn and Cannon returning as starters. Cajuste is also expected to be a full-go for training camp, offering immediate swing tackle potential and starter upside. Health is the primary concern with this group, and Cannon has a hefty cap hit ($9.6 million) that could be re-worked or lead to a net savings of roughly $5 million if cut or traded. The Pats could draft a safer injury bet that gives them the flexibility to move on from Cannon or eventually bump Wynn inside to guard. However, I’d like to see the 2018 first-rounder stay at left tackle where he played well in his first extended NFL action.

An easy way to create cap space would be extending Thuney to lower his $14.8 cap hit on the franchise tag. I’ve written at length about Thuney’s talent, consistency, and durability. Andrews is on-track to return next season after blood clots abruptly ended his 2019 campaign. With the captain hopefully back in the mix, the Patriots have one of the best interior trios in football, but depth could be an issue with steady backup Ted Karras now in Miami. Froholdt will be healthy for camp, but the team was disappointed in very early returns (sloppy technique, too many penalties). As for Eluemunor, who cost the Pats a fourth-round pick, conditioning remains an issue. If confidence is waning with those two, an interior offensive lineman with center capabilities is a draft need.

Beau Allen replaces Danny Shelton at nose tackle or as an A-Gap defender. Shelton was good last season, but Allen offers a stouter gap-plugger compared to Shelton’s penetrating style. The Patriots could use a three-down defense end, seeing as they never replaced Trey Flowers, and Deatrich Wise isn’t developing into an every-down player. Penn State’s Yetur Gross-Matos or Iowa’s A.J. Epenesa fit the description at the top of the draft.

The Patriots lost over 1,100 edge snaps with the departures of Van Noy and Collins in free agency. Winovich will likely take on a much larger role alongside veteran John Simon. Simon will probably man the strong side as a stronger run defender while  Winovich runs down plays from the backside. Calhoun brings a lot in the kicking game and offers depth, while Rivers is a complete unknown at this point. The Patriots should look for a long-term replacement for Van Noy in the draft, maybe Wisconsin’s Zack Baun.

The boogeymen are no more, and the depth at linebacker is gone. Hightower is a prime candidate to receive a contract extension that will also lower his $12.4 million cap hit in 2020. The Pats could walk away from the 30-year-old to save roughly $9 million but should exacerbate all other avenues before it gets to that point. Bentley will assume the starting mike linebacker role with Elandon Roberts gone, and Copeland is a poor man’s Collins. Still, the Patriots might address off-ball linebacker in the draft, although Belichick hasn’t invested much in that spot in recent years. The last time he drafted a linebacker in the first three rounds was Colins in 2013. LSU’s Patrick Queen and Oklahoma’s Kenneth Murray are many mock-drafters picks for the Pats with the 23rd overall selection.

Still the best and deepest secondary in the NFL, the Patriots are loaded once again at cornerback. Gilmore is in-line for an extension that could lower his $18.7 million cap hit that’s the most among all cornerbacks. Along with creating cap space, there’s better building block for the next era of the dynasty than the reigning Defensive Player of the Year. In year two, expect Williams to get opportunities as an outside cornerback opposite Gilmore. There are no immediate plans to move him to safety, and he practiced last season at corner.

The Patriots have good depth at strong safety with Chung, Brooks, and Phillips. Phillips is a hybrid player that could have a heavy workload at inside linebacker. The team needs a developmental free safety that can take on Duron Harmon’s responsibilities as a deep zone defender and center fielder to free-up McCourty.

The Patriots need a kicker. Bringing back veteran Nick Folk, who was 16-for-19 and made all of his extra points, is one option. Rodrigo Blankenship and Tyler Bass are two draft options.