Patriots Roster Reset: What Will the Offense Looks Like With Jarrett Stidham at Quarterback? 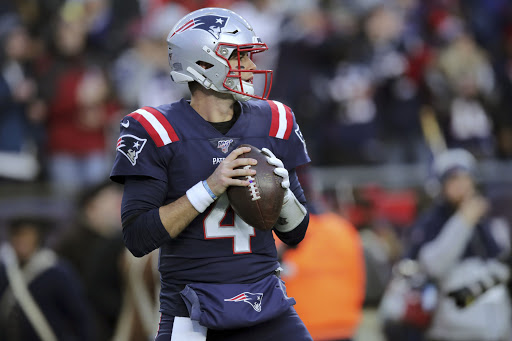 The Patriots, as they did with Tom Brady, are doing everything possible to put second-year quarterback Jarrett Stidham in the best position to succeed in 2020.

Stidham will need to earn the starting job. But it’s being handed to him on a silver platter by Bill Belichick after the team didn’t do much at the quarterback position in free agency or the draft.

The question now is, what will the Pats offense look like with Stidham? Will it be relatively the same as it was with Brady under center?

Although one would expect tweaks to mold the offense around Stidham’s strengths, which in some ways are very different from Brady’s, reinventing the wheel entirely seems illogical.

New England morphs in all phases based on their personnel and game plan, but Belichick and then-OC Charlie Weiss built the foundation of the Patriots’ system in the early years of the dynasty.

Based on its success and the freedom within the scheme to make changes, the Stidham-led Patriots shouldn’t look completely foreign. We are still going to see Edelman option routes, tight ends up the seam, and passes to the running backs as long as Belichick is in New England.

In terms of play-calling tendencies, the Patriots could continue a trend towards a run-heavy approach that started in 2018, was successfully implemented in 2008 without Brady and was the catalyst of three Super Bowl victories with a young Brady at the helm in the early 2000s.

However, the more efficient approach in the modern NFL would be to use run formations and personnel to set up a dangerous play-action passing attack. Displacing defenders with play-action presents larger passing lanes and easier decisions for a young quarterback. A play-action heavy offense will also allow the Pats to implement new schemes, such as designed rollouts and bootleg concepts, that play to Stidham’s strengths as a more mobile passer than Brady.

But ultimately, Stidham will determine play-calling tendencies and the number of plays available to the coaching staff by his performance and knowledge of the Patriots’ playbook.

Below, we’ll reset the depth chart with thoughts on all four quarterbacks currently on New England’s roster:

The odds of Stidham developing into a highly successful NFL starter as a fourth-round pick are long. Auburn’s offense didn’t suit his skillset, and he did lose some help around him from 2017 to 2018. But his fourth-round selection was warranted despite having great arm talent after struggles with erratic ball placement and skittishness in the pocket at Auburn. Stidham’s rookie preseason was impressive, though, quickly showing signs of more consistent accuracy and pocket poise. He is already processing defenses with sound decision making while also grasping the offense better than most young quarterbacks. And the in-house hype suggests that he’s a calm and cool leader with a tremendous mental grasp of the game that makes impressive downfield throws, leaving everyone impressed behind closed doors. To keep improving, Stidham is focusing on two key weaknesses in his game.

The Pats quarterback continues to work on his throwing motion to shorten his release, something he began working on before the 2019 draft. When Stidham needs to generate extra velocity or distance, he holds the ball back and extends his throwing arm, leaving himself vulnerable to strip sacks while losing precision and timing with his receivers. In his rookie preseason, Stidham’s time to release was a lengthy 2.77 seconds and his overall time spent in the pocket was over three seconds, per Pro Football Focus. Mentally, Stidham needs to be faster through his progressions, and a more compact release would also shave off precious tenths of a second. There’s tangible evidence for the optimism surrounding Stidham. But we truly don’t know how he’ll fare against NFL starters until we see it in action.

Film Review: What Kind of Quarterback Do the Patriots Have in Jarrett Stidham?

There’s one plausible scenario where Hoyer could start games, assuming Stidham is healthy, and that’s if COVID-19 wrecks the lead up to the season. In a situation where there was no in-person offseason program, and limited training camp and preseason, it might make sense to ease Stidham in, and the Pats’ first stretch of games are no cupcakes. Even though we know who Hoyer is by now, a backup, if we are going to give Stidham credit for his 2019 preseason performance, we must also acknowledge that Hoyer’s as well.

Remember when Brian Hoyer randomly lit up the #Lions backups in the first preseason game of 2019? Mo Harris and Matt LaCosse were here to save the #Patriots offense.

The veteran lit up the Lions backups last August and made a solid start for the Colts against the Steelers during the regular season. Hoyer’s skill set fits the system well, and he’s a very accurate passer, routinely showcasing his control on the ball during practice competitions with Brady. He’ll also be an invaluable resource to Stidham, helping the young quarterback learn the offense and prepare for opponents. And Hoyer’s work as a scout-team quarterback received plenty of praise from his teammates following the Patriots’ win in Super Bowl 53 over the Rams. It seems unlikely that Stidham beat out Hoyer as a rookie only to lose the starting job to the veteran a year later. But having Hoyer around will be extremely helpful.

#Patriots UDFA QB J'Mar Smith throwing the corner route on the smash concept with great anticipation and ball placement. Mirrored smash against two-man pulls the boundary corner up to the hitch leaving a passing window to the corner route. Perfect ball. pic.twitter.com/CF9jrvx9ZL

The Louisiana Tech product has better college tape and physical tools than a handful of quarterbacks in this year’s draft class. Smith’s arm talent and anticipatory throws are easily recognizable as he makes eye-popping passes both in and out of structure. He’s also an impressive pocket mover with great awareness and short-area movement athleticism to elude trouble, reset, and throw. As impressive as some of Smith’s tape is, there were stretches of play where his downfield accuracy is erratic at best, and he struggles to stay in the pocket as his routes are developing downfield. Then, there was a two-game suspension for violating team rules in 2019 that is tough to overcome at the most important position on the roster. Quarterbacks are leaders and the face of the franchise, and although players get drafted with character red flags all the time, it’s one position where that can really hurt a prospect. If Smith can put the past behind him and become more consistent on the field, he has starter-level upside.

When they say the #Patriots didn't draft a QB: Lewerke! pic.twitter.com/A7iz69ZHjN

Lewerke’s tape at Michigan State is less exciting than Smith’s, but there’s something to work with there. Following a breakout sophomore season, Lewerke’s stock as a future draftee was trending up. But a disastrous final two seasons for the Spartans, who were not well-coached offensively or well-equipped with skill players, led to some harsh scouting on the Michigan State quarterback. Lewerke has a smooth throwing motion from top-to-bottom with a snappy release and delivers a catchable ball. He’s also got an NFL arm for tight windows and gets through underneath and middle of the field reads with ease. He was also a relatively productive scrambler, although he tested poorly at the combine and only ran a 4.95-second 40-yard dash (21st percentile). The main areas of concern with Lewerke’s game are far too many boneheaded decisions and a lack of poise in the pocket. Lewerke’s fear of stepping up into the pocket and inability to set his feet properly led to wild throws, manifesting itself in a 25-24 touchdown to interception ratio over his final two seasons in East Lansing. Lewerke has the baseline physical tools to make an NFL roster, but he’ll need to quickly cut down on turnovers and improve his pocket mechanics.