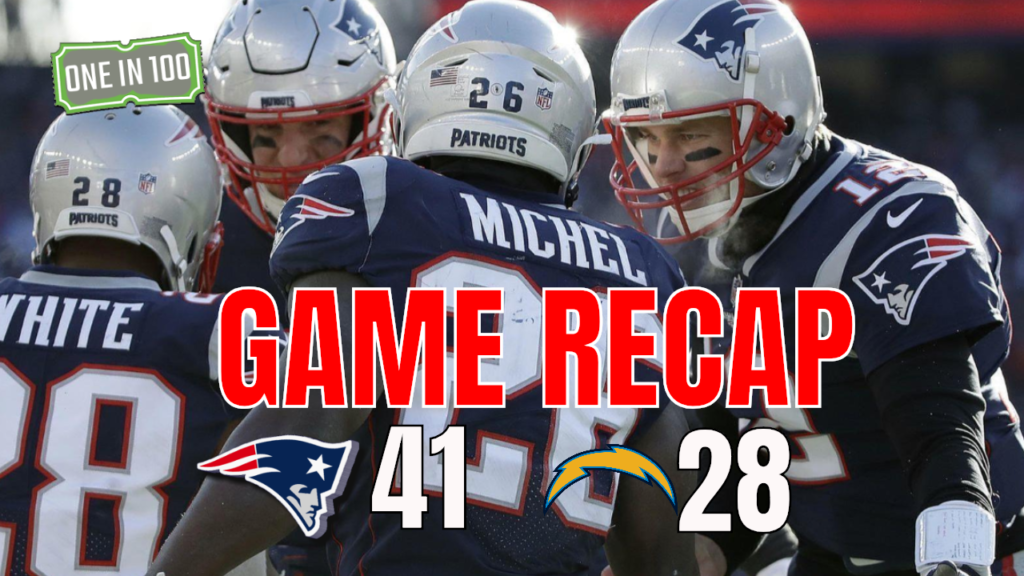 FOXBORO — Another LA beatdown for New England fans to savor.

Sony Michel ran for three first-half touchdowns and Julian Edelman had over 100 receiving yards in the first half as the Patriots demolished the Los Angeles Chargers, 41-28, Sunday at Gillette Stadium. The blowout victory sets up a rematch with the Kansas City Chiefs next Sunday at Arrowhead Stadium. By going 9-0 at Gillette this season, the Patriots finish the season as the NFL’s only unbeaten team at home.

The Patriots beat Patrick Mahomes and the Chiefs, 43-40, on a last-second Stephen Gostkowski field goal on Oct. 14 at Gillette Stadium.

It will be New England’s eighth consecutive appearance in the AFC Championship game.

Considered a formidable opponent for the Patriots coming in, the Chargers and their highly touted defense were anything but Sunday as the Patriots pulverized them throughout the first 30 minutes, building a 35-7 halftime lead.

The Patriots have won their last nine postseason games at Gillette Stadium. But to return to the Super Bowl for a third straight year and a fourth time in five years, they will have to win in a building that has been a house of horrors for Tom Brady and the Patriots.

The win was the 35th in the franchise’s postseason history, tying Dallas for second all-time behind Pittsburgh (36). The Patriots also became the first team in NFL history to have four rushing touchdowns in the first half of a playoff game.

After winning the coin toss, the Patriots showed their desire to get on the board first and set the tone. And they did exactly that.

The Patriots opened the game with a nearly perfectly executed drive, marching down the field in 14 plays, covering 83 yards. Michel capped off the drive with a one-yard run up the middle.

Julian Edelman was a beast in the first half. Edelman finished with nine catches for 151 yards and now has 98 career postseason receptions, second all-time behind his childhood hero, Jerry Rice (151).

With the exception of his opening drive, Philip Rivers, who fell to 0-8 career against Tom Brady, had no such luck in the first half. The only success Rivers had in the first half came thanks to a third-and-15 conversion to Mike Williams and a 43-yard touchdown to a wide open Keenan Allen on a totally blown coverage by Stephon Gilmore when Gilmore bit on an inside move and Allen went outside for a fair catch in the end zone for the touchdown.

But the Patriots took the ball on the next drive and drove 67 yards in seven plays, with Michel going off right tackle for 14 yards and diving for the right pylon.

Albert McClellan recovered a muffed punt by Desmond King at the Chargers 35 after the only punt of the first half by the Patriots. Four plays later, it was Michel powering his way up the middle for five yards and a 35-7 lead.

The Patriots came out in the second half and again dominated, going 57 yards in 14 plays but chewing up 7 minutes, 22 seconds of clock, capped off with a 28-yard Stephen Gostkowski field goal. The kick made it 38-7 with 6:31 left in the third.

After a pair of Chargers touchdowns made it 41-22, Stephon Gilmore picked off Rivers with just over four minutes left to seal the win for the Patriots.