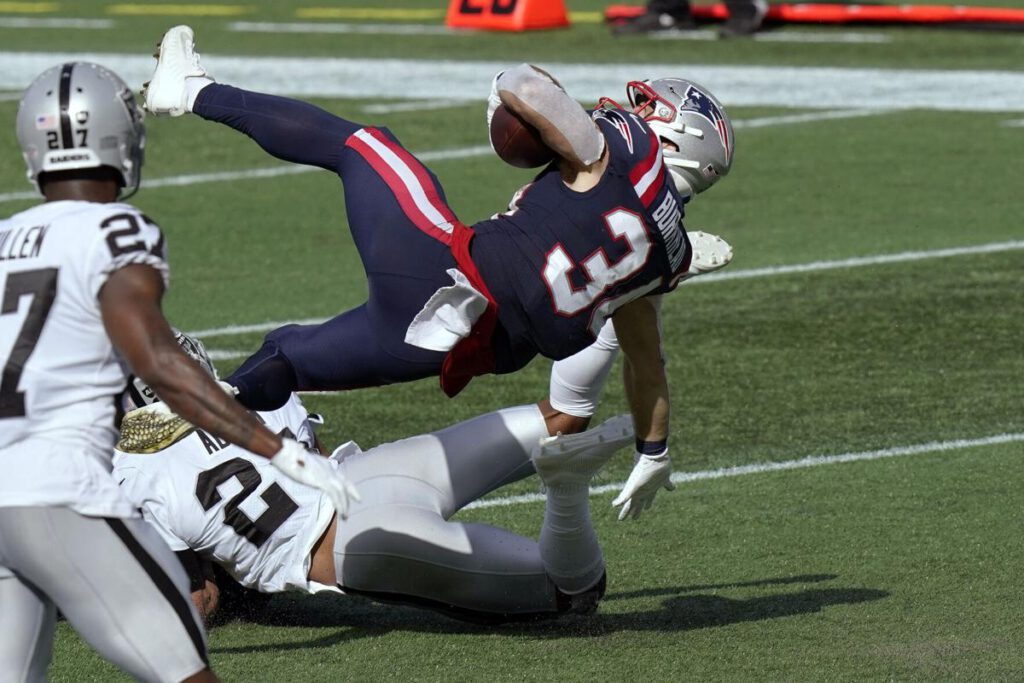 It wasn’t pretty at times, but the Patriots defeated the Oakland Raiders on Sunday 36-20 at Gillette Stadium to improve to 2-1 on the season.

It was a ground and pound sort of game for the Patriots who – after a slow start on offense – utilized a trio of Running Backs to dominate time of possession.

Undrafted rookie J.J. Taylor carried the load in the first half finishing with 43 yards on 11 carries. Rex Burkhead scored 3 touchdowns (2 on the ground one receiving) and Sony Michel led the way with 117 yards including a two career long runs, a 38 and 48 yard scamper in the 2nd half.

As usual the Patriots defense managed to eliminate Las Vegas’ biggest aerial threat in Darren Waller holding him to 2 late meaningless catches. The Patriots threw all kinds of people at Waller all game. They started with safety Adrian Philips, switched to CB/Safety JoeJuan Williams. Waller also saw almost all of New England’s cornerbacks at one point or another. Stephon Gilmore, J.C. Jackson, Jason McCourty and Jonathan Jones all lined up opposite Waller at times. The Patriots applied bracket coverage, chipped him at the line and just made things about as frustrating for the Raiders top pass catcher as possible. Waller did not see a pass even come his way in the first or second quarter. All in all he saw 4 targets catching two balls for 9 yards.

Rex Burkhead: Burkhead found the end zone 3 times on the day. He filled in the James White role as the primary pass catching back. Finished with 7 receptions for 49 Yards with 6 carries for 49 yards on the ground and 3 total scores.

Sony Michel: Possible a job saving day for Sony. With Damien Harris set to come off IR next week Michel ran like his job depended on it. 9 carries for 117 Yards including career longs of 38 and 48 yards. He also added two receptions for 23 more yards.

Chase Winovich: Continues to bring the heat off the edge. Right now the second year linebacker IS the Patriots pass rush. He finished with 2 QB hits, one forced fumble and created the pressure that led to another Carr forced fumble and TD late in the 4th.

Darren Waller: The Raiders most consistent receiving option, 100+ yards in 4 out of the last 7 games.  Waller didn’t get a catch until the 4th quarter finishing with 2 grabs and 9 yards on 4 targets.

Cam Newton: Newton’s worst overall game as a Patriot. Threw a terrible pick in the 1st half, missed a wide open N’Keal Harry in the end zone and nearly got Julian Edelman killed on a couple of throws downfield.  Finished 17-28 for 162 yards, TD, INT and 27 yards rushing.

N’Keal Harry: While he did a solid job blocking in the run game Harry finished with only 2 catches for 34 yards, 27 coming on one catch.