Patriots Season in Review: JC Jackson is One of the Best Bargains in the NFL 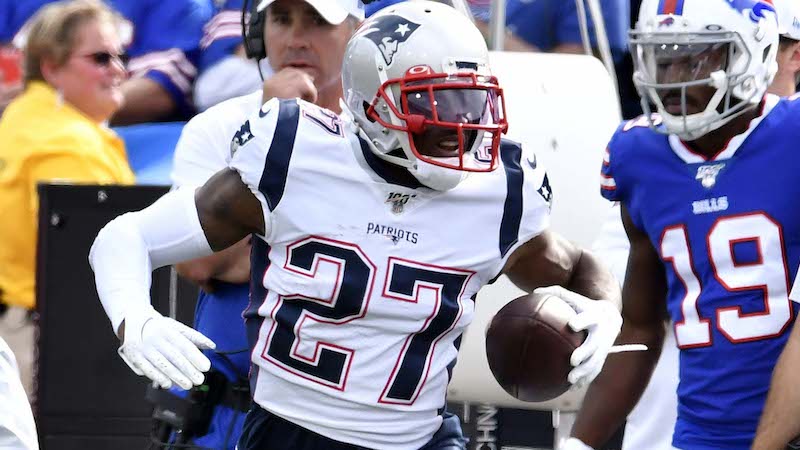 The Patriots have the best secondary in the league thanks to veterans like All-Pro cornerback Stephon Gilmore and safety Devin McCourty, but they also have some youth as well.

Second-year cornerback JC Jackson is matching the production of some of the best cornerbacks in the league and doing it on an undrafted rookie contract.

In his second season, Jackson’s 37.0 passer rating into his coverage led all cornerbacks with at least 150 snaps in 2019, a 146-player pool with Jackson at the top.

The 24-year-old is one of the league’s biggest contract bargains with a 2020 cap hit that ranks 107th among cornerbacks. The Patriots have two more years of control with the former undrafted rookie, with Jackson due $660k next season, followed by a restricted free agent season the following year.

He also touted a 49.2 completion rate into his coverage, which was eighth-best and only slightly worse than teammate Stephon Gilmore (49.0), the likely Defensive Player of the Year.

And where Jackson really shines is defending the deep ball, as his terrific ball tracking and man coverage skills made him incredibly difficult to attack on passes of 20 or more yards downfield.

On 16 deep attempts, opposing quarterbacks only completed two of them, and Jackson’s 0.0 passer rating and five interceptions on deep targets both led all qualified cornerbacks.

To put it all in perspective, targeting Jackson was more detrimental to opposing offenses than spiking the ball into the ground, which nets a 39.6 rating and avoids turning the ball over.

At the basis of everything for Jackson is his physical brand of press-man coverage, which is also at the core of New England’s coverage system and explains why they signed him as UDFA.

Most of the time, Jackson goes with a mirror technique, where he’ll crowd the receiver at the line of scrimmage and smother his release like a basketball player guarding a ball-handler.

Here against Darius Slayton, Jackson stays square to the Giants rookie until Slayton commits to an outside release. Once Slayton goes outside, Jackson gets his hands on him and pushes him into the sideline to suffocate the route. Now that he’s in Slayton’s hip pocket, Jackson is in a position to look back for the football. He takes a peek back and then plays the ball through Slayton’s hands to force the incompletion.

Later in the season, Jackson used the same mirror technique and jam to intercept a pass intended for Bengals speedster John Ross.

Jackson keeps his weight back and leads Ross into the sideline, shuffling his feet to get over the top of the release of the speedy wideout and using his hands to limit the space Ross has to work with along the sideline. This time, Jackson reads Ross’s eyes, and when he sees Ross start to focus on tracking the ball, he knows it’s coming his way. Jackson looks back to the quarterback and tracks the ball perfectly into his mitts for an interception.

When you take a look at the all-22 angle, you’ll also see that Jackson has deep safety help from Duron Harmon. Knowing Harmon is rotating over allows for Jackson to look for the ball earlier than usual, which helps him run under the throw by Andy Dalton for the pick.

Jackson’s knowledge of New England’s coverage rules is expanding by the day, and he’s now using his help and leverage to deliver shut down coverage and make plays on the ball.

Turn up the volume for an audio breakdown of Jackson’s first-quarter interception of Chiefs quarterback Patrick Mahomes, where the second-year cornerback plays divider leverage perfectly with his help in the middle of the field.

Although Jackson’s first two seasons were terrific, there’s room for improvement with any player, and for him, that starts with playing from different alignments and defending shorter passes.

Now that he’s elevating to CB2 status behind Gilmore, and teams know that targeting on deep throws is an easy way to turn the ball over, Jackson is getting some different looks.

In a man-heavy system, the Patriots like to have their cornerbacks shadow individual receivers based on the matchups, which means Jackson might have to travel into the slot at times.

Here, the Pats are in a two-man coverage with two deep safeties and the corners playing with inside leverage. Jackson gets beat at the line of scrimmage on the release by Dolphins wideout Isaiah Ford. He lets Ford move him off his leverage with an outside stutter and leaves the inside open for Ford to run a quick slant over the middle.

With Jackson playing inside leverage, he shouldn’t get beat on an in-breaking route, but he’s still learning the nuances of playing in the slot rather than on the boundary, his natural position.

Jackson’s issues from inside the formation are easily correctable as he gets more comfortable playing in the slot and learns how to win with body positioning from there as he does outside.

And consecutive seasons of productive play at a volatile position bodes well for his future.

With cornerbacks, you often see ups and downs when it comes to the target-based stats like passer rating or completion percentage into a players’ coverage outside of a select few.

For example, former Patriot and fellow UDFA Malcolm Butler allowed a passer rating of 78.2 into his coverage during his 2016 Pro Bowl season. The next year, it climbed to 102.3.

Jackson, on the other hand, had equally stellar coverage stats in his first two NFL seasons.

The great cornerbacks in this league, like Gilmore, are consistently great year in and year out on tape and the stat sheet.

We are only two seasons into his career, and he has a long way to go before we compare him to Gilmore, but Jackson’s play is transferring from one year to the next like a stud at the position.