Patriots Season Preview: How Will The Offense Evolve Without Rob Gronkowski? 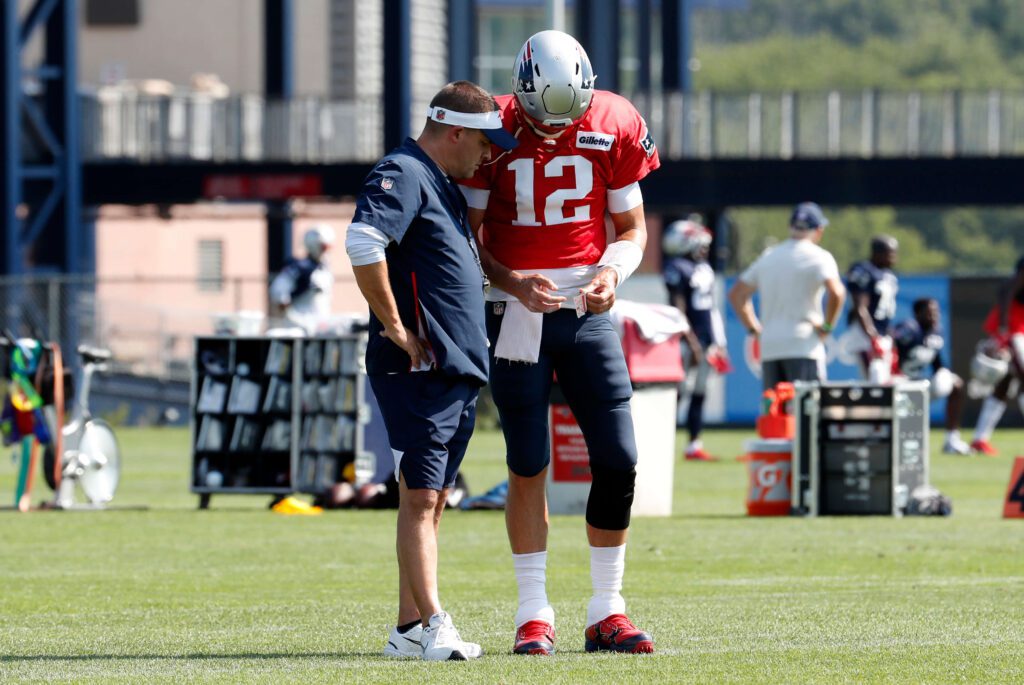 FOXBORO — We are finally here. The Patriots will kick off their Super Bowl defense at home against the Pittsburgh Steelers on Sunday night.

The Patriots offense finished fourth in points and fifth in Football Outsiders’ DVOA metric a year ago, a top-five unit based on the two best statistics.

The biggest question facing the Patriots moving forward is how they will evolve offensively without Hall of Fame tight end Rob Gronkowski?

“When you’ve lost many players over many years, you don’t just try to plug-and-play and say that one person is the same as somebody else who’s no longer there,” said offensive coordinator Josh McDaniels.

Before we hone in on Pittsburgh, here’s a preview of what’s to come this season for the Pats on the offensive side of the ball:

At the turn of the decade, the Patriots were unsurprisingly ahead of the curve when it came to attacking the middle of the field in the passing game, loading up on slot receivers and tight ends.

By their metrics, routes such as curls, slants and digs were the most efficient a year ago.

There are two obvious ways the Patriots could interpret this information:

1. Continue to have success attacking the middle of the field with Julian Edelman, the tight ends on the roster and maybe use some of their bigger wide receivers in the slot to replace Gronk’s skill set.

2. Now that defenses are gearing up to shut down the middle, throw to the outside. With Josh Gordon, Demaryius Thomas and eventually rookie N’Keal Harry, the Patriots have the size and contested-catch ability to win on fades, back shoulders and other throws outside the numbers.

Replacing Gronkowski in the running game will be arguably harder to do than in the passing game. I’d say replacing him as a receiver is still tougher, but he’s a beast as a blocker, no doubt.

If the Patriots can get something closer to Dwayne Allen as a blocker from Ryan Izzo or Ben Watson when he returns, that would soften the blow.

Newcomer on the offensive line Korey Cunningham is a 96th percentile SPARQ athlete and a former High School tight end. Jermaine Eluemunor did it at times with the Ravens.

The Patriots will also turn to fullback James Develin as they did last season, which brings us to the next section.

“We are what’s called a ‘regular’ team: fullback, halfback, two wide receivers and then we morph into other things from there. It truly is our base,” were offensive line coach Dante Scarnecchia’s words at Super Bowl media night back in January.

The Patriots ran 37.4 percent of their plays out of 21 or regular personnel last season, the second-most in the NFL trailing only Kyle Shanahan’s San Francisco 49ers.

Here’s the catch: the numbers in the passing game don’t support the eye test that this was a successful strategy for New England.

The Patriots averaged 4.1 yards per rush out of 21-personnel last season, which is still good, even if it’s worse than their average out of 11-personnel (4.7), and could be skewed by short-yardage situations.

The bigger issue for the Patriots is that they were a below-average passing team out of 21-personnel with Develin on the field last season.

Tom Brady averaged 7.1 yards per attempt with an 83.5 passer rating out of 21-personnel, and the Patriots averaged just 0.01 expected points added on those passes.

In all other personnel groupings, Brady averaged 8.0 yards per attempt with a 101.9 rating and the Pats’ expected points added per attempt rose to 0.22.

The name of the game in the NFL nowadays is to be as effective as possible through the air, and teams that throw better than their opponents win more games.

Bill Belichick and Josh McDaniels might be going to heavy to offset the light defenses around the league.

But the Patriots will hopefully be a better passing team out of 21-personnel this season.

That brings us to the next part of the equation: personnel groupings.

With Gronk last season, the Patriots had at least one tight end on the field on 85 percent of their offensive snaps, according to Sports Info Solutions.

In the 2016 season, the Patriots had a viable replacement in former Pro Bowler Martellus Bennett.

With Bennett in and Gronk out down the stretch, the Patriots still had a tight end on the field on 85 percent of their offensive snaps.

The Patriots only ran 41 plays, or 3.8 percent of their total offensive snaps, in their two running back “pony” sets.

And they only had 18 drop-backs all season with four wide receivers on the field, which was a tick above the league average of 17 drop-backs per team.

Based on their current personnel, it would make sense for New England to get more running backs and receivers on the field.

Anyone that watches the Patriots knows that they target their running backs more than most teams.

However, research done by The Athletic’s Ben Baldwin suggests that targeting running backs is less efficient than passes to wide receivers and tight ends.

Baldwin found two reasons for this inefficiency: passes to running backs are usually shorter and deep throws to backs are less successful than to other types of receivers.

The Patriots led the NFL in pass attempts to their running backs on first and second down last season with 124.

Throws to running backs on early downs, or running downs, are more efficient than running back carries, so that’s a net-positive for the New England offense.

And the Patriots will always throw to their backs when they like the matchups for James White and company.

YEAR TWO FOR THE GEORGIA GUYS

The two young guns that will have the most significant roles this season are 2018 top picks Sony Michel and Isaiah Wynn.

We saw Michel last season, and although there’s always room for improvement, he had a terrific rookie season as a ball carrier displaying patience, vision and the ability to finish runs.

In year two, the Patriots and Michel hope that a full training camp and an offseason cleanup procedure on his knee will make him even more explosive and versatile.

Early returns suggest that the plan is working as Michel has some extra juice and was more involved in the passing game with Tom Brady.

As for Wynn, we’ll get our first regular-season taste of the 23rd overall selection in last year’s draft on Sunday night.

The Pats left tackle had a slow start to the summer working his way back from injury, but as soon as he was a full go, he was extremely impressive.

In 22 pass-blocking snaps, Wynn didn’t allow a single pressure in the preseason.

Scar said, “all the things we thought he could do on our evaluations of him at Georgia, you can see in his play right now.”

Wynn’s foot speed and upper body strength are excellent, and he’s as fundamentally sound as any offensive linemen that I’ve seen at this stage of his career.

The Patriots are in good hands with the Georgia guys, and both could have breakout seasons in 2019.

WHO WILL EMERGE AS WR3?

The final piece to the puzzle for the Patriots offense will be filling out the depth chart behind Julian Edelman and Josh Gordon.

N’Keal Harry’s injury, which landed him on injured reserve until at least Week 9, opened the door for Demaryius Thomas, Phillip Dorsett and rookie Jakobi Meyers.

Based on experience in the system, Dorsett seems like a logical choice, and he was the third wide receiver on the field post-Gordon a year ago.

But both Thomas, who proved he has something left in the preseason finale, and Meyers, the breakout star of Pats camp, will push Dorsett for those extra snaps.

As always, situations and matchups will dictate how the Patriots do things.

The Patriots offense could do several things this season that go against the grain with the analytics community. Throwing outside the numbers, running the ball and throwing to running backs are all inefficient ways to score points.

However, writer an analytics expert Josh Hermsmeyer brought up an excellent point when I asked him about the strategies.

Hermsmeyer said that using analytics on a team-level can be flawed because every scheme and every opponent is different. Certain things are deemed inefficient that might not be in individual matchups, and that Bill Belichick is the best at finding those edges.

Baldwin added that deep targets, even outside the numbers, are positive EPA plays. Throwing those to Josh Gordon and N’Keal Harry, for example, would still be beneficial.

The Patriots are the best at finding weaknesses in their opponents, which is why they can do some of these things and still have a top-five offense.