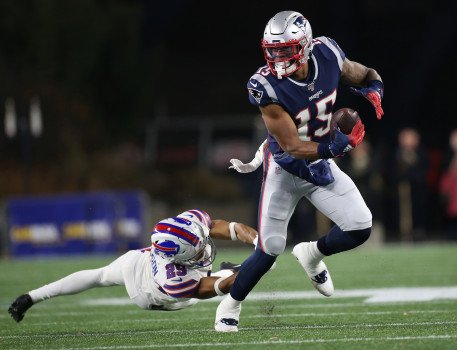 When the Patriots selected a wide receiver in the first round for the first time under Bill Belichick, the expectation was for rookie N’Keal Harry to become an impact player immediately.

The Arizona State products physical tools, and a massive need for offensive playmakers, got Belichick to break his mold last April.

The Pats rookie started the season on injured reserve, missing the first nine games of the season and most of training camp as well. Once he returned, it was a bumpy road, but it wasn’t due to a lack of effort.

In the last four games of New England’s season, the Pats ran 27 plays where Harry was either the intended target or primary ball carrier, the most by a non-running back on the team.

And in the Wild Card loss to the Titans, Harry had a team-high seven targets (two receptions) and took one jet sweep handoff; the Pats tried to get him the ball but failed to do so effectively.

Overall, Harry only caught 45.2 percent of his targets, averaging 4.92 yards per intended play, which ranked 194th out of 210 qualified pass catchers over that span.

According to Next Gen Stats, Harry also ranked dead last in the league, 143 out of 143 qualified receivers, in average separation on all of his pass routes (2.21 yards).

Before you give up on Harry after seven games, it’s important to examine the context surrounding his struggles.

First, athleticism is not an issue for Harry, and this isn’t a case of him being too slow or heavy-footed to create separation and make plays at the pro level.

At the NFL scouting combine, Harry’s testing numbers landed him in the 98th percentile in SPARQ score with a weight-adjusted speed score that fell in the 90th percentile.

As the RAS metric also tells us, Harry is an elite athlete with an excellent size-speed combination and good explosiveness for a 6-2, 228-pound receiver.

On the field, the athleticism translated in certain areas, especially when the Patriots ran plays to either throw the ball to Harry out of the backfield or hand it to him on reverses and sweeps.

He’s a natural ball carrier in space with excellent contact balance and strength, avoiding eight tackles and averaging over ten yards after contact on his 17 regular-season touches, the former ranked third in the NFL (min. ten touches).

As Belichick stated, though, you don’t draft a receiver, let alone in the first round, because he’s good at running with the football.

“We felt like he could run with the ball. I wouldn’t say we drafted him – I don’t think you draft a receiver to run that play, but if there are things that the receiver can do that are productive when you get him the ball, then consider him,” the Pats head coach said.

The 2019 receiver class was terrific, with the likes of AJ Brown, DK Metcalf, Deebo Samuel, Terry McLaurin, and others making significant year-one impacts, but that’s not always the case.

For Harry, his issues as a receiver stem from shortcomings in route running, which aren’t uncommon for young pass-catchers that are learning to defeat NFL-style coverage systems.

“The style of game in college, there’s not as much man-to-man, it’s a lot more fast tempo,” Shanahan said. “There are huge zones with where the hashes are, it’s very hard to get good at route running, especially when you’ve got some of these guys that are pretty talented with the ball in their hands. Working on routes so much in college is kind of a waste of time.”

Shanahan’s description of the differences between the college passing game and the pro-style systems explain perfectly what N’Keal Harry dealt with during his first season with the Patriots.

Harry didn’t see much man, especially not press-man, in the Pac-12, and he was one of those talented players with the ball in his hands that could rely on his raw athleticism make plays.

Now with the Patriots, he sees heavy doses of press-man coverage, and he went from the athlete on the field to an athlete on the gridiron, so his lack of polish is more of an issue.

Plus, he was learning one of the most complex offenses in football at an accelerated pace because he missed so much time.

Harry’s tape shows that he was adequate at running routes against zone coverage, which isn’t a surprise based on his experiences in college.

Against zone coverages, Harry had a 71.4 receiving grade, according to Pro Football Focus, but that grade fell to 54.9 out of 100 against man coverages.

Here, Harry correctly reads out an inverted cover-2 zone by the Titans defense. The outside corners drop to split the field while the deep safety rotates down into the deep hole in cover-2. Harry feels the defensive back on the line buzz to the flat to take Sanu and sees the off-corner backpedaling, so he sits his route down at the sticks in the vacated area. If Brady’s pass doesn’t take him to the ground, Harry has a chance for more than just a first down.

But when teams play press-man against Harry, his poor route-running technique, especially in his releases at the line, makes it extremely difficult for him to create separation and make plays. A recurring issue that was apparent on his college tape during the draft process as well.

The two elements of a good release are 1. closing down the space between the receiver and the defender and 2. against press coverage, getting the defensive back to move in either direction to create a space for the receiver to get off the line.

On this third-down incompletion, Harry is on the outside against Titans cornerback Adoree Jackson in press-man coverage. Harry’s first order of business should be to move Jackson to the inside to open up the sideline for his vertical route. The Pats rookie tries an inside-stutter release, but it’s not sharp or believable enough to get Jackson to bite, so the Titans CB doesn’t move. With Jackson still on his spot, he can force Harry into the sideline to suffocate the route, so he’s in Harry’s hip pocket the entire way. At the top of the pattern, Harry subtly pushes off, and Jackson grabs him, and the officials swallow their whistles, but Harry needs to resort to that hand-fighting because there’s no separation due to a poor release.

Along with his skills as a ball carrier, the Patriots also love Harry’s contested-catch abilities; he ranked second in the class with 17 contested catches in college.

However, Harry only caught three of his seven contested targets in 2019, and his 42.9 catch rate was below the league average of 43.3 on contested throws.

For him to succeed, the Patriots and Harry need his jump-ball skills to be an elite trait, not an average to below-average attribute.

Patriots offensive coordinator Josh McDaniels tried to utilize Harry’s size and frame down by the goal line on back shoulders, and high-point fades.

Some of those targets were successful, resulting in two touchdowns, but Brady was only three-of-seven on throws to Harry in the red zone.

Here, Harry has an excellent opportunity to win a one-on-one battle for a touchdown, but his technique lets him down. The corner is playing slightly off the line, so Harry must close down space and get into his body. The foot-fire thing he does in his release is a waste of time. It’s not getting the corner to move, nor is it closing down space, and it takes Harry too long to get upfield. Then, instead of running through the back pylon, Harry turns his body, pointing his chest towards the quarterback, way too early, and he can’t get to the spot that Brady throws a catchable ball in the corner of the end zone.

Based on the leverage of the corner, a back-shoulder throw might’ve worked out better than a high-point fade, but Harry’s wasted movement in his release messed with the timing.

Harry has immense potential. With a full offseason and training camp, he could come back in his second year and produce at a first-round level like others in the 2019 class.

He didn’t show much improvement in his route-running technique during his rookie season and will need football-specific training in the offseason to improve; get in the lab and go to work with a professor from Route Running University (that doesn’t exist. It’s a joke, people).

In the lab, cutting down on wasted movement and becoming more sudden and explosive in his releases should be his top priority, but developing a consistent slant or “under” route against press-man will go a long way as a counter to his fades and comebacks.

Denver’s Courtland Sutton, who has a similar athletic profile and struggled with route running early on in his career, is also a great study for Harry.

Sutton was 142nd out of 143 qualified receivers in separation on all of his routes, only ahead of Harry, but he had 1,112 yards and six touchdowns this past season for the Broncos.

By improving his releases, Sutton made it easier on himself to “stack” the defensive back downfield, which means he’s getting over the top of his man. Even if he can’t run away from the defender, with the DB on his back, Sutton can make the necessary adjustments to the ball to make contested grabs.

Harry has all the tools, but the onus is on him now to put in the necessary work to fix the route-running technique issues that have plagued him dating back to his days at Arizona State.