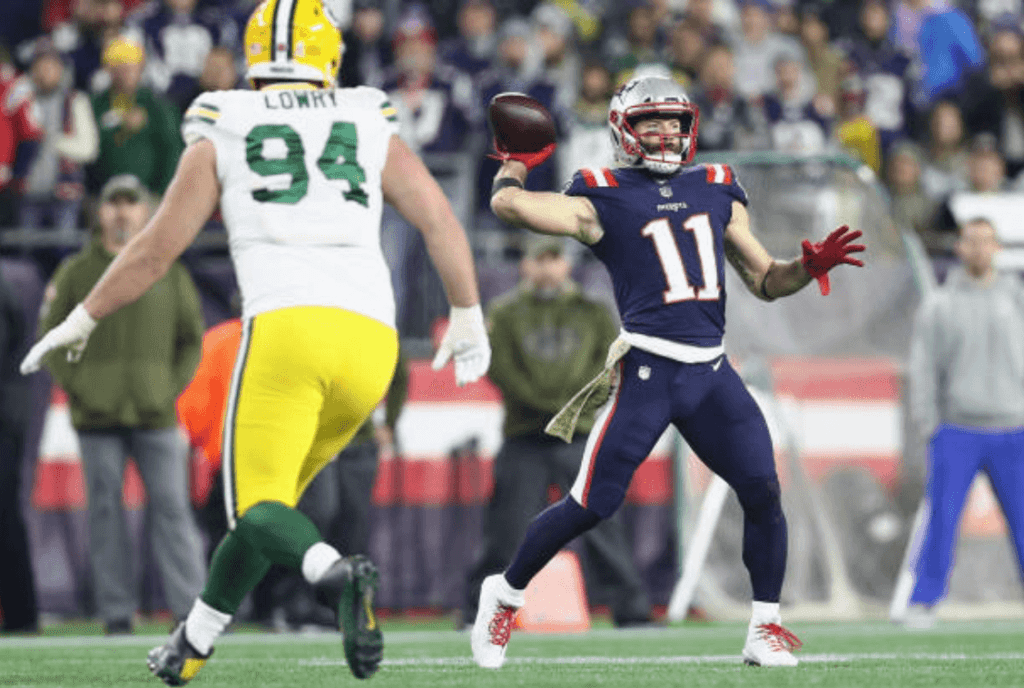 FOXBORO — If Bill Belichick appreciates anything about his players and coaches, it’s the massive amount of energy and attention they all pay to the details of every single game. As the leaves fall, the Patriots attention to details and execution rise.

It’s why, year after year, he never gets overly worried about his team’s record in September.

Those little details showed up again Sunday night in a very big way.

Just take a look at two “trick” plays that resulted in 10 points. First quarter, Patriots leading 7-3. The Patriots call a flea-flicker. But this flea-flicker was a bit different in its timing and execution. James White took the handoff from Tom Brady, got to the line of scrimmage, took a quick step to his left and then flipped back to Tom Brady. This left Tom Brady very little time to get the ball to Julian Edelman who was flying open downfield after pausing at the line of scrimmage to get the linebackers to bite.

I asked Belichick about the timing involved in that play and the way it was executed by all involved. As he usually does, he took it to another level.

“That play is a play that really takes great timing and execution,” Belichick told me. “It’s a hard play to execute on a lot of levels and it’s a little – there’s some risk to it, obviously. The idea, of course, is to suck the defense up, in or towards the line of scrimmage and then be able to get somebody behind them, either behind the secondary or behind the linebackers. In this case it was behind the linebackers. You always count on the running back to make the right decision so you never want to pitch the ball back if there’s going to be a problem with the pitch back and now the quarterback’s getting the ball and somebody’s on him and there’s a lot of things that could go wrong there.

“But, you know, James made a great decision. It was a tough one too, because when he had the ball, [Nick] Perry was up the field and he had a good sense and a good feel that he was blocked, wasn’t really close to Tom. But it’s a lot easier when the line of scrimmage is flat and there’s kind of no penetration, then it’s kind of easy to pitch the ball back and you know that the quarterback’s safe. When you pitch it back and there’s a defender behind you where you’re pitching it and you have to kind of count on that guy being blocked, it’s a tougher decision for the back. But James saw it, he made a good one, Trent [Brown] was in good position, Joe [Thuney] was in good position to block on the play.”

What’s apparent is the calmness in the eye of the hurricane around Brady and White during the play.

“We were able to get it cleanly executed but it was a tough play to execute,” Belichick continued. “And then of course the receivers, Julian [Edelman] and [Chris] Hogan can’t – they don’t want to go too fast or the defense will recognize it, they have to make it look like it’s a running play and block and hesitate there for a little bit so that the timing of the play works out but also they don’t give it away and it really appears to everybody that it’s a running play and then it turns into a pass play.

“It was very well-executed by James, by Tom, by Julian and by the offensive line as a total group to sell the run but still be in position to pass-block and then to give the play an opportunity – everybody an opportunity to handle the ball. I thought that Dwayne Allen made a good play on that too where (Reggie Gilbert) blitzed and crossed his face and Dwayne had to flatten him out and gave James a clean chance to get the ball back there so it was – a lot of little things on that play, a lot of things that can go wrong, but if it works, then there’s an opportunity for a bigger reward. There’s a lot of moving parts to that. But again, so you really want guys that are experienced at making the pitch, handling the ball, running the route. You put a lot on those guys and they did a good job.”

The Patriots would settle for an Stephen Gostkowski 28-yard field goal that made it 10-3.

Asked Belichick about the flea flicker that led to a FG in the first half. One of the more intriguing plays since so many players had to execute and sell the play correctly. BB notes the sense of James White to know where Brady was in pocket and Edelman to sell play down field: pic.twitter.com/QKHtapOD1S

Later, with the game tied, 17-17, in the fourth quarter, it was again Brady, Edelman and White teaming together for a 37-yard play on a double-pass that set up the go-ahead touchdown. This time, in a play that all Patriots fans recall from the 2014 playoff win against the Ravens, Brady threw back to Edelman, who then threw across to a wide open White, who took it 37 yards to the Packers 2.

“I think when you put the play in and you work on it, you’re prepared to call it in certain games at a certain point,” Belichick noted. “If it comes up, it comes up. I thought Josh McDaniels, as usual, called a great game and that was a great call. The timing was perfect.

“Most importantly, it was well executed. No play is a good play if it’s not executed well and that was executed very well by Tom, by James, by Julian, by the offensive line. We got good movement downfield, had a couple of nice blocks that sprung him. It was well executed and it was a great play call by Josh, too.”

Then there’s the defense. Early in the game, the Patriots overloaded the defensive right side, allowing Devin McCourty to spring through between the right tackle and guard. The hurried throw on third-and-6 forced Green Bay’s first punt of the night.

“I think the safeties did a great job of it, and I think it could be more or less important from week-to-week, depending on different circumstances and different things that involve your opponent and your specific game plan for them. So, it’s always a fine line, and that’s why experience at that position is so important. Disguising is good and you want to try to do it, but you have to be in position to handle your responsibility. So, disguising at the expense of being out of position and not being able to make the plays that you need to make or be where you need to be, that’s a bad thing. So, the good thing is disguising, but the bad thing is being out of position, so you have to try to balance those. Again, that comes with experience from Devin [McCourty] and Duron [Harmon] and Pat [Chung] knowing where they need to be, what they need to do, how much risk or how far away they can be from that responsibility and make it look like they’re doing something else that they would normally do and trying to tie different calls in based on the formations, because we have no control over the formation the offense comes out in.

“We don’t know where they’re going to be when we make a call, so once they align, then the variables on disguise change quite a bit. Of course, if the safeties – with experienced safeties like we’re fortunate to have – can work together and complement each other as part of the disguise, then that’s a good thing, too. But, it’s a fine line and it’s, I’d say, a very individualized thing between the player or players and the formation, the situation and the people that we’re playing against and what they do. So, it’s kind of a, I don’t want to say a trick subject, but it takes some understanding and experience. And, you know, that also extends to the linebackers and [Dont’a] Hightower, [Kyle] Van Noy and guys that play at that spot to a lesser degree, but maybe on an equal level of doing that with the line, the line of scrimmage, the backs, the quarterbacks – trying to affect them to get them as much as they can, depending on a lot of variables that could change from play to play.”

The Patriots blitzed several more times throughout the game, bringing different pressures each time, and really just getting burned once, when Rodgers hit Marquez Valdes-Scantling for 51 yards, leaving Jason McCourty on an island and setting up Green Bay’s final touchdown of the night.

“With the safeties and Steve [Belichick] goes over that with them every week, and the linebackers, DeMarcus [Covington] and B-Flo [Brian Flores] go over that with them, as well. So, I mean, look, we put a lot of trust in those guys and they’re the ones that are on the field. Again, when you make a call from the sideline, they’re the ones that are playing the game and they see and can recognize things a lot better than a coach can because they’re actually out there doing it and they get a later look at it than the coach does when he makes the call,” Belichick said.

“So, you know, we give them certain parameters, but in the end, all the decisions that they make out there are their decisions and we trust them to make good ones and make the right ones. We never want to put them in a compromising position. Again, the execution of the plays is more important than the disguise. But, we’ve had a lot of players through the years, going back to particularly Rodney [Harrison] and guys that – Devin of course, Pat – those guys have been here a long time – Duron, too, for that matter. But, they’ve really been good at that, and that’s helpful to the entire defense.”

The reason Belichick puts so much trust in his players is because he knows how hard they work and study the details. Very little in Foxboro happens by chance and there’s a good reason for that.