Patriots Shutdown Defense Could be Best of Bill Belichick Era 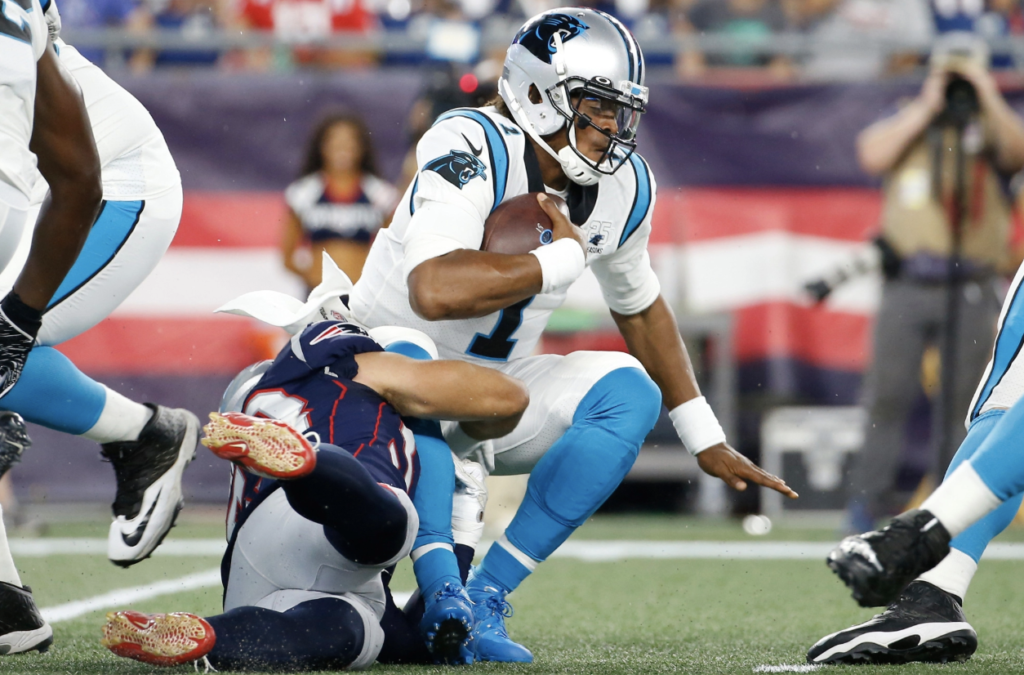 FOXBORO — Anyone who paid attention Thursday night to the beat down the Patriots defense applied to Cam Newton and the Panthers can tell this Patriots unit has the potential to be the deepest unit Bill Belichick has ever had in his 20 years of excellence in Foxboro.

Belichick, of course, knows a thing or two about great defenses, having coached one of the all-time best units in New York with the Giants in 1986, with the likes of Lawrence Taylor, Carl Banks, Gary Reasons, Harry Carson, Jim Burt and Leonard Marshall.

The 1990 Giants were no slouches either, stopping Joe Montana from a Niners run at a three-peat in San Francisco in the NFC Championship game.

Belichick’s 2003-04 Patriots teams were great in their own right, with a Hall of Fame corner in Ty Law, a potential hall of famer in Rodney Harrison at safety, one of the best postseason edge players in history in Willie McGinest, Tedy Bruschi, Ted Johnson and Mike Vrabel as linebackers and Richard Seymour and Ty Warren over the nose. That was an amazing group that won back-to-back Super Bowls.

But this Patriots group has been assembled to be just as great as the ’03, ’04 and ’07 groups. Only deeper. And given the uncertainty of Patrick Chung’s availability due to his reported indictment on cocaine possession in New Hampshire, the Patriots need a plan B. That plan B might just be veteran safety Terrence Brooks.

Yes, it’s only preseason but the Patriots have been getting after the quarterback from all angles throughout the preseason, over the nose, on the edge and everywhere in between. We saw it again Thursday in the 10-3 win over Carolina and Cam Newton, a game that featured four sacks and the Panthers not crossing midfield in the first half. Michael Bennett, Adam Butler and Kyle Van Noy all reached the quarterback, with Van Noy showing off cat-like quickness off the edge in his obliteration of Newton in the first quarter.

“We played competitively,” Belichick said in true understated fashion. “We still have a lot of things to work on. There’s a lot of things we can improve on, so we’ll just go back to work this week and just keep grinding away. We’ve got a long way to go. We’re making progress.”

“Yeah, it was great,” Devin McCourty said. “I think today we talked about getting off to a good start against a team that was very high-powered on offense. You talk about Cam Newton, [Christian] McCaffery, [Curtis] Samuels – all of those guys – [Greg] Olsen. They’re very tough to stop once they get going, so I thought we did a good job of first stopping the run, and then getting a few good rushes in there to mix it up. We’ve got a lot of players out there that play good football, either here or other places, so it felt good for all of us to get out there and start to put it together.”

From training camp, through the first sessions of joint practices in Detroit and Nashville and now through Thursday, Patriots fans are getting a sense of how great this defense could be. The long beef around New England has been the Patriots inability to get to the quarterback on a consistent basis. This team, with the additions of rookies like Chase Winovich, certainly seems poised to change all that.

But what about the players? Are they getting an idea of how special this defense could be?

“Yeah, but I’m probably the bad guy to ask,” McCourty told me afterward. “I feel like that every year. We’ve got a lot of good players here and it’s about putting it together. I think one of the best things about going away for two weeks is you get to spend a lot of time together in the hotel, after meetings, eating, hanging out. As a group, the better you know somebody, the better your relationship is.

“I think you put more pressure on yourself to be accountable to that person, to know your stuff, to play for that person. So I think we’ve been really building as a defense and as a team overall, so it feels good when you put in all of the work during the week and you come out and have a good performance. But as you know, in this league it’s a week-by-week thing that you’ve got to put that work in each week to have those results that you want.”

“It’s a long season and there’s nobody else in this world that’s going to give us any energy, so we have to give ourselves our own energy,” Adam Butler said.

The pass rush was one area of focus for improvement. Creating turnovers is another. The Patriots in their defensive hey-dey were machine-like in their ability to force turnovers, returning several to the house for scores. That’s something that many veterans feels has been missing over the last couple of seasons.

“The one thing that we want to improve is getting turnovers,” McCourty added. “That’s something that we know we need to do during the season to just make it easier on ourselves. One thing walking away, even though it was a good first half and really overall a good game defensively, is just trying to take the ball away. It’d be a big difference for us on defense.”

“Obviously, we have a talented group, a group with a lot of depth, and a group that still has to continue to grow and play together,” Duron Harmon said. “We know we have a lot of talent and depth on this team. It really comes down to working hard each day and creating a brotherhood. We have to continue to work and never get complacent.”