Film Review: What Demaryius Thomas Brings to the Patriots 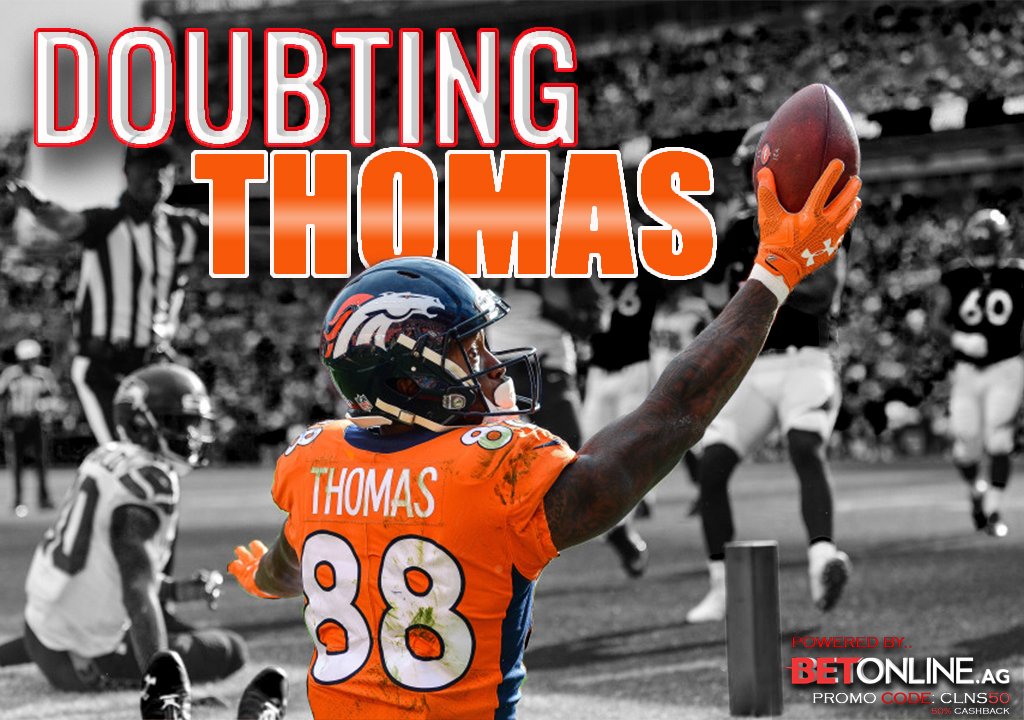 Thomas is recovering from a ruptured Achilles that ended his 2018 season in late December, and is now eligible to practice and play in games for the Patriots.

After reviewing Thomas’s 2018 season, it’s clear that he no longer has the explosiveness that he did in the early part of the decade, and that was pre-Achilles injury.

Once upon a time, Thomas had five consecutive 1,000-yard seasons from 2012 to 2016 where he was one of the best big-play threats in the NFL, and could beat you over the top or as a dynamic ball carrier; he’s not that guy anymore.

However, Thomas reinvented himself some last year as a possession receiver to carve out a new role that should help him stay in the NFL.

Thomas is a Josh McDaniels holdover from McDaniels’ time in Denver, and my guess is that the Patriots OC signed off on Thomas’ fit in his offense.

Thomas can read coverages and techniques to alter his route on the fly based on how the defense is playing him.

Here, Thomas is in an off-man coverage situation at the bottom of the screen with a post safety in the middle of the field. He puts his head down and charges hard out of his stance, which gives the illusion that he’s probably running a go or post. When the corner across from him sees Thomas’ stem, he opens his hips to stay over the top of the route and play to the safety in the middle of the field. When the corner opens, Thomas alters his route to get into the defensive backs’ blind spot. Just like if a car sneaks into the blind spot in your side mirror, the corner loses sight of Thomas, who then gets his man turned around with a hard jab step toward the sideline to sell an out-breaking route before coming back on an in-cut over the middle.

Thomas might not be as dynamic as he once was, but his route detail has developed over time.

At 6-3 and 225 pounds, Thomas is one of the bigger receivers in the NFL, and he uses that size to play above the rim on the perimeter now that he isn’t creating as much separation.

On this 22-yard catch, Thomas beats soft-press coverage on a pretty back shoulder grab. The corner doesn’t jam him at the line of scrimmage opting to speed turn to keep the play in front of him. Thomas carries him like it’s a go route and then adjusts to the back shoulder throw while the ball is in the air displaying excellent body control along the sideline. Thomas also uses his freakishly long frame to pluck the ball out of the air above his head.

There are some focus drops on Thomas’ tape, but he also makes some high-level contested catches with strong hands and a well above-average catch radius.

Finally, Thomas ran a career-high 33.4 percent of his routes out of the slot last season and has a decent feel for working himself open over the middle against zone coverage.

The Ravens defense rotates into a split-safety post-snap after showing a single-high look before the play starts. When Thomas reads the zone, he takes his route right at the two linebackers dropping into zones over the middle and wraps an intermediate crosser right behind those linebackers before coming out the other side into an open space. That’s an excellent job of clearing the underneath linebackers while not getting too far downfield to give the post safety a play on the ball.

If Thomas can run routes against zone coverage like that one, he might be able to gain Tom Brady’s trust.

Before we overreact to the reported one-year deal worth up to $6 million for Thomas, let’s wait and see what the guarantees are for the 31-year-old.

With the severity of his Achilles injury and 2018 production, it would be shocking to see that the Patriots guaranteed Thomas a roster spot based on the contract value.

He’ll need to get healthy to carve out a role, and I still have my doubts that he can run past NFL defensive backs with regularity to even play at his 2017 form (83 catches, 949 yards, five touchdowns).

But a healthy Thomas will likely give the Patriots an upgrade over the recently departed Chris Hogan.