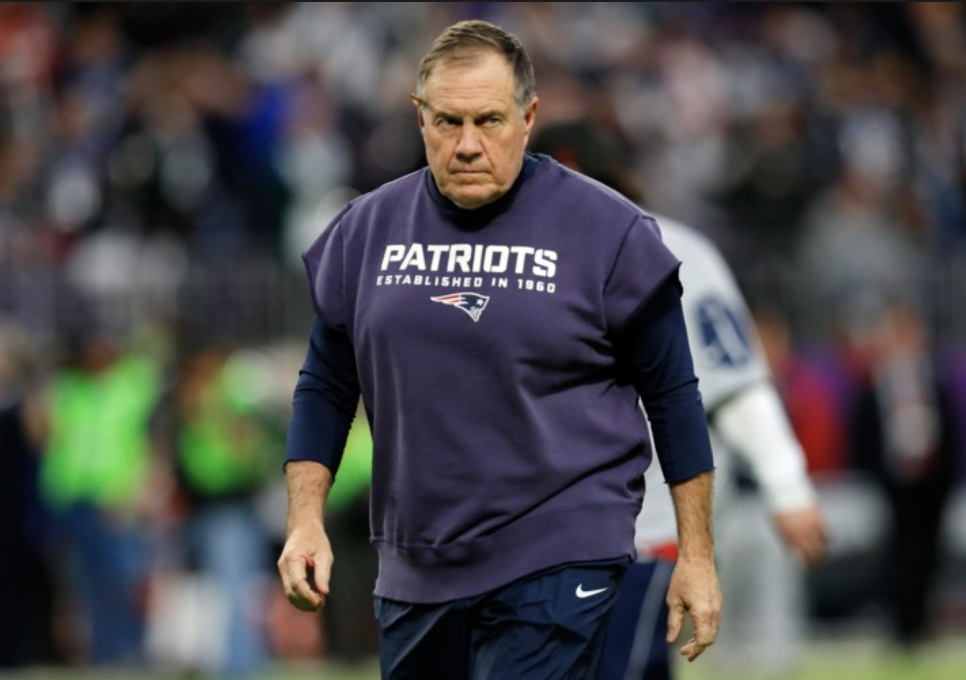 ATLANTA, GA — For two straight weeks, Bill Belichick and his staff have coached circles around their opponents to reach the franchises 11th Super Bowl.

On Super Bowl Sunday, Belichick will square off with a still inferior but formidable foe in Rams boy-wonder Sean McVay and veteran defensive coordinator Wade Phillips.

The 33-year-old McVay pilots the second-best offense in the NFL, and Phillips and Brady will meet for the tenth time in Brady’s career.

Before we get into the game plan, here’s a crash-course on McVay’s offense and Phillips’ defense.

“That’s a key component to the offense. Yeah, the spacing is – absolutely. That’s, I’d say, one of the trademarks of what they do and the misdirection, so they’re in there close and there’s a lot of misdirection that comes with it,” Belichick said.

On the other side of the ball, Phillips runs the same system with a few wrinkles as he always has with a base 3-4 defense and post safety (single-high) coverages.

One of those wrinkles is an uptick in zone coverage to fit the personnel in the secondary, but the Rams played more man-to-man since the return of Aqib Talib and match most of the routes on the outside in their zones.

“To his [Phillips] credit, there’s not many of us that have a system that can last that long. I’ve certainly changed a lot in the last 30 years schematically. Wade really hasn’t, he really hasn’t. You’ve got to give him credit for that. But, the system has lasted,” Belichick told me.

Below, we’ll go over the Patriots’ ideal game plan to defeat the Rams in Super Bowl 53:

As you’ll hear all week, like most quarterbacks, interior pressure is Tom Brady’s kryptonite, and the Rams have the best interior pass rush in the NFL.

Led by reigning Defensive Player of the Year, Aaron Donald, the Rams lead the league in interior pressure rate at 16.6 percent.

And Brady’s passer rating against interior pressure this season was 63.1 compared to 118.7 when there’s pressure off the edge.

Instead of discussing that over-saturated topic, we are going to break down where the New England offense has the advantage, and how they can use them to win a sixth Super Bowl.

During the regular season, the Rams run defense allowed a league-worst 5.1 yards per rush and was 28th in Football Outsiders’ DVOA metric against the run.

However, in the postseason, Los Angeles’s run defense has improved considerably cutting that number in half to 2.3 yards per carry against two of the NFL’s best ground games in the Saints and Cowboys.

But the vulnerabilities in the Rams run defense still exist as LA’s last two opponents did a poor job of adjusting to Phillips’ unique defensive fronts.

In their base defense, which the Rams will go to against heavy personnel, Phillips utilizes an under front to let Donald shoot gaps and make plays behind the line of scrimmage.

And the Rams will also put an extra linebacker in the box, usually hybrid linebacker Mark Barron.

Here’s an example of what not to do with Donald playing as the backside three-technique.

New Orleans tries to “reach” Donald with the left tackle instead of blocking head up with the left guard. Donald is not your typical defensive lineman. He’s so fast off the ball that when you try to reach him with the tackle or center, he’s already in the backfield blowing up the play. Donald is a problem, of course, but the alignment on the backside makes that a difficult block regardless.

The Patriots coaches know that reaching the backside three-technique is hard, so they adjust their “power” plays accordingly.

Against Phillips in the past, the Patriots made the conscious decision to block the backside with the guard pulling the backside tackle instead. That allows the play side guard to “get two” with a fold block on the nose tackle with the center before climbing to the linebacker at the second level (h/t Zach Dunn).

The Patriots will also run their ISO scheme with James Develin in the backfield with a similar approach. The backside guard takes the three-tech, the play side guard and center double the nose before the guard climbs to the linebacker, and they get Develin one-on-one with the linebacker in the hole.

McDaniels and Scarnecchia know they’re asking for trouble, and will have a similar fate as the Saints if they expect to execute reach blocks against Donald.

RUNNING ON RAMS IN 11-PERSONNEL

The Patriots want to run out of heavy personnel groupings, but the Rams defense is much worse defending the run when the offense has three wide receivers on the field.

This season, the Rams allowed a league-worst 6.3 yards per rush against 11-personnel.

The Patriots can take advantage of that weakness with one-back schemes, but they’d be smart to incorporate jet sweeps with Cordarrelle Patterson and Julian Edelman for two reasons:

1. Runs to the outside get the ball carriers away from Donald and Ndamukong Suh in the middle of the defense.

2. The Rams defense, albeit in a small sample, doesn’t defend jet sweeps well.

In the regular season, the Rams allowed 47 yards on four runs by wide receivers (11.8 average), and overall, they allowed 5.1 yards per carry on the perimeter compared to a 4.1 average in between the tackles.

Plus, they allowed an explosive run on 20 percent of rushes to the perimeter versus 10 percent between the tackles.

The Patriots can run the football against the Rams defense using its aggressiveness and lack of depth at linebacker to their advantage, but they have to be smart about it, unlike the Saints and Cowboys.

The Patriots have two clear advantages when it comes to throwing the ball against the Rams, and both should mitigate the pass rush some.

First, the Rams defense was 28th in DVOA at defending the middle of the field and allowed 112.9 passer rating and 10.5 yards per attempt on 152 pass attempts.

Second, Los Angeles is one of the worst defenses when it comes to defending the pass out of 12-personnel (1 TE, 2 RB) allowing 13.2 yards per attempt since Week 5, according to Warren Sharp.

In the NFC Championship Game, the Saints and running back Alvin Kamara destroyed the Rams defense on option routes against the Rams linebackers over the middle.

And the Patriots can attack both the middle of the field and throw out of 12-personnel with James Develin in the backfield or their two running back packages.

The Rams pass rush deserves the attention it will get this week but there are plenty of areas where the Patriots offense has the upper hand.

Although the Rams offense isn’t as potent as it was earlier in the season, it’s still extremely dangerous, and McVay is a brilliant offensive mind.

The Patriots’ primary focus in this game should be stopping the Rams’ rushing attack.

Most of what the Rams do offensively starts with their running game as they incorporate a heavy dosage of play-action passes that build off of their run schemes.

This season, the only quarterback that had a higher rate of play-action passes than Rams quarterback Jared Goff (35.2 percent) was Ravens QB Lamar Jackson.

The key for the Patriots defense is defending the run when the Rams are in 11-personnel. The Rams run out of 11-personnel 77 percent of the time (highest rate in NFL) and average 5.2 yards per carry.

In last years Super Bowl, the Eagles ran out of 11-personnel on 70 percent of their running plays and averaged six yards per rush. Nick Foles won MVP, but the Philly rushing attack won the Super Bowl.

To avoid another Super Bowl loss, New England needs to correct its mistakes from a year ago, and they can look to old defensive coordinator Matt Patricia for the blueprint.

Yes, Patricia, the same defensive coordinator that let the Eagles offense hang 41 points on his defense in that very Super Bowl last season.

Although the Lions defense allowed 30 points, it took two touchdowns late in the fourth quarter for the Rams to pull away from Detroit.

The first lesson the Patriots can take from Patricia is a type of defensive alignment that will limit LA’s wide zone running scheme.

The Lions shut down the Rams’ wide zones down by stealing a defensive front from Belichick: the EX front, and you’ll definitely see New England in this look on Sunday.

The front puts one defensive tackle in the A-gap and the other in the B-gap with two standup edge defenders at a five-technique and a seven or nine technique. The aggressiveness of the alignment from the two defensive tackles lets them penetrate the line of scrimmage early in the down while the ends set the edge preventing the runs from getting to the perimeter.

Detroit also laid the groundwork for a strategy that the Chicago Bears perfected against the Rams in Week 14, which is to sit back and almost ignore all of the misdirection and window dressing McVay uses.

Here, the Rams run Brandin Cooks on a dummy sweep and then run play-action. The Lions defense rotates into a cover-3 zone, but the only defender that reacts to Cooks’ motion is the flat defender while the rest of the defense sticks to their assignments. By not falling for any of the fakes, McVay’s scheming doesn’t displace the rest of the defense, and Goff throws incomplete down the right sideline to Cooks.

If the Patriots can limit the Rams running game, and play their assignments against play-action, they’ll have a good chance against this offense.

This season, Goff ranks 24th out of 33 qualified quarterbacks in PFF grade while under pressure (47.3).

Although the LA offensive line can dominate games, taking advantage of Goff’s slow processing and lack of anticipation will be critical for the Patriots defense on Sunday.

Belichick and de facto defensive coordinator Brian Flores will unleash a familiar game plan of twist games and disguised blitzes to confuse the blockers up front, but confusing Goff will be just as important.

And to do that, they’ll have to take Sean McVay out of Goff’s ear.

"You know how many points we're averaging per game? 32.9.
How many did we score today?" – @JaredGoff16 😉@RamsNFL #LARams#SoundFX pic.twitter.com/EHO4NvPDvW

According to the NFL rulebook, McVay can converse with Goff through the league-issued headset until 15 seconds are remaining on the play clock, and you can hear the Rams head coach calling out different audibles for Goff at the line of scrimmage in the video above.

(note the play clock when the offense gets to the line)

The 24-year-old Goff can’t read a defense before the snap as Tom Brady can, so his coach rushes the offense to the line out of the huddle so he can assess the defense and make the necessary adjustments.

To combat this strategy, and pressure Goff, expect the Patriots to deploy variations of their “playground” defense and rotate their safeties after the snap to force Goff into making post-snap decisions without the help of McVay.

The Patriots couldn’t make Foles feel the pressure last season, but that’s their best bet against Goff and the Rams.