Ted Karras: ‘I Would Love to Stay’ With Patriots 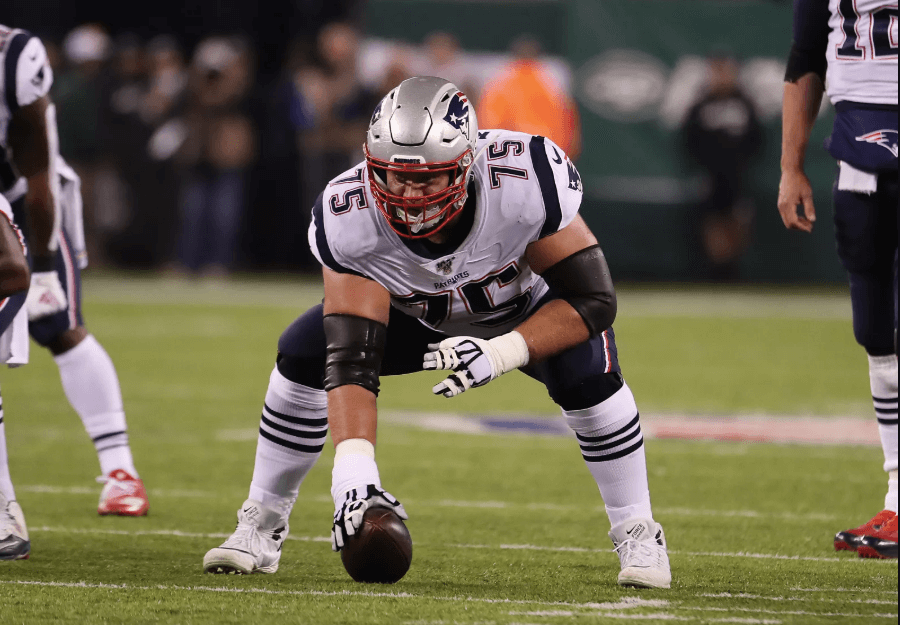 As Burkhead runs to his right, he flips the ball to rookie N’Keal Harry, who reverses field and picks up a head of steam. Out in front of Harry is Brady, of all people, and center Ted Karras. Brady’s job is to get enough of defensive end Shaq Lawson to help Harry turn the corner, but as Karras pulls out, he runs directly into Lawson, prohibiting him from turning upfield to get into the Buffalo secondary. Brady sees Karras take Lawson, switches responsibilities on the fly with his center, and cuts down Bills All-Pro corner Tre’Davious White in the open field as a lead blocker for Harry. The play gained 18 yards on a field-goal drive to put the Pats up 10-3 in the second quarter.

“That was one of the best plays of the year, I thought,” Karras said, reflecting on the win that clinched the AFC East crown for an 11th consecutive season.

At that point, the 2016 sixth-round pick, who was the Patriots’ top backup in the interior of the offensive line, only had five starts in his first three NFL seasons.

Karras was one of New England’s most consistent offensive linemen down the stretch, and although the season didn’t end well for the Patriots, he bolstered his resume heading into free agency.

“It’s pretty exciting. I’m looking forward to it, gotta see what happens. It’s kind of a weird time in your life. It’s kind of hanging in the balance. I’m very grateful for the season that we had, but it’s going to come down to the opportunities that come my way,” Karras told CLNS Media.

The four-year veteran reiterated that his first choice is to remain with the Patriots.

“I do want to stick around, but I’m also open to whatever happens,” he continued. “I’d love to stay in Boston. I love this town. These people have been amazing. My life is here, and I live here in the offseason. I would love to stay, but it’s not really up to me. I’m open to all the possibilities.

“I’ve been here for four years. It’s tied for the longest I’ve ever lived in one place ever. I can kind of say I’m a Boston guy.”

The Karras family are no strangers to the business of the NFL. The 26-year-old is a third-generation NFL player with his grandfather, great uncles, and father all reaching the pros. His father then went on to have a coaching career.

“It’s a strange feeling. I felt it many times,” Karras explained. “I moved a lot as a kid. My dad was a football coach, so you are a hired gun for the time. When it comes time where you either need to re-up or move on, it’s an interesting feeling. It’s kind of fun. I hope I can stay.”

Karras also finds himself in an unusual situation with the Patriots and Andrews, who is expected to return for the 2020 season.

With the Pats’ center back in the mix, re-upping with New England could mean that Karras goes back to being a backup, or bumps over to guard if left guard Joe Thuney jets in free agency.

“It’s always important. You want to play,” Karras said of getting a chance to remain a starter. “You want to be the best you can be, but any job in this league is precious. If that’s what I have to do [be a backup] to stay in the league, then that’s what I’m going to do.”

“At the end of the day, I’m a football player. I have more say now that I ever have in my career, but I’m not going to put stipulations on it. If you want to play me at guard, I’m ready to play guard. I loved playing center, and I thought I was a pretty good fit.”

Along with his best friend on the team, Thuney, who Karras thinks is the best player he has played with besides Tom Brady, the Pats offensive lineman couldn’t help but notice the turnover in the organization.

“We have so many guys whose future is hanging in the balance. It’s been kind of a nucleus for the four years I’ve been here. It’s a strange feeling.”

Karras joins both Brady and Thuney as free agents, among others, but now the Pats need to fill gigantic shoes in recently retired offensive line coach Dante Scarnecchia as well.

“I’m so grateful to have so many amazing people in this organization. I’ve learned so much under Scar’s tutelage. I respect him probably second-most to my dad as far as men that I look up to, and I’m really happy for him. He deserves the best retirement, and I hope he has a great time.”

“He is hard on us, but he fosters a relationship. I remember this one time, I think it was before the Dolphins game, he asked about my sister, and he knew her name. That’s not something you expect a boss or coach to know.”

Karras and Scarnecchia shared another bond over their love for books with Scar coming in with great recommendations.

“We had a cool thing where he’d recommend a lot of books to me, probably four out of my top ten favorite books are Scar recommendations,” Karras said. “Shogun, The Source, Guns of the South was a good one. A lot of history stuff. We are both big readers, I read on the way here [in an uber]. That was really cool.”

The Patriots still haven’t tabbed a replacement for Scarnecchia, but Karras offered some optimism in the wake of losing a giant of the game.

“We have so many great coaches. There are so many guys that worked with the offensive line over the years. It’s fortunate that people got to see how he worked. It’s going to be tough to emulate how hard he works, but whoever gets it is going to be fantastic.”

Karras now finds himself in a holding pattern until free agency begins with the legal tampering period on March 16, followed by the official start to the league year on March 18.

He fills his days with workouts in the morning, which now include boxing and lifting weights with Thuney, as the two members of the 2016 rookie class find themselves in a similar spot.

“We met on the first day. We were roommates from the start, so we lived together for two years, and then I got married,” Karras said of his friendship with the Pats left guard. “But I go over there all the time. I still have some stuff at that house.”

On Thuney’s impending free agency Karras jokingly said, “let’s make it a package deal. Joe is going to get, I hope, and he deserves the world with how consistent he has been throughout his career. I’ve learned a lot from Joe about being a really good football player. I would say, besides Tom Brady, he is probably the best football player I’ve been around.”

As for Brady, because we can’t write something without discussing his looming free agency, Karras feels like most do about the situation.

“It’s pretty hard to see him playing for another team,” he said. “I’ve been pretty open about saying I think he’s the greatest. He’s amazing. He’s taught me so much, not even just about football, but also about being man, a father, and having a family and balancing, I’m obviously not at that level of stardom, just being in the NFL and still having your family. He’s an extraordinary man.”

Karras hasn’t had any contact with the Patriots since the season ended but expects to hear from them before the start of free agency.

“I’m sure we will before free agency starts. I’m excited to talk to them and see what they think. I care very deeply about what Bill [Belichick], Josh [McDaniels], and the organization thinks of me, so I’m interested to see.”

The four-year veteran is still representing the Patriots as an alternate in the NFL Players Association, however. The union and league are coming down to the wire in collective bargaining negotiations for the CBA that expires following the 2020 season, with a potential work stoppage looming in 2021.

In March, Karras will go down to Miami for an NFLPA summit to hopefully make significant progress on the CBA with top team rep Matthew Slater, and fellow Pats alternates Devin McCourty and Joe Cardona.

“Slater is our rep, we’ve voted for Slater every year, he’s our representative. I think me and [Joe] Cardona tied. It’s usually two alternates, but they made it three for us.”

The biggest obstacle in recent CBA negotiations is a proposed 17-game schedule by the owners that is opposed by many players.

Although he stands by the union 100 percent, Karras isn’t as sour on the prospects of a 17-game schedule compared to others.

“If we are going to go against it, I want to be clear that I’m with the union,” Karras said. “I think that we can explore, if we get a lot more money in the cap, then I don’t know, we are football players.”

“I think most guys want to get a deal done,” he continued. “If we were to play another game, we obviously would want a little more. I’ll know more in March. I don’t want to speak out of turn. I think that’s kind of the basis of it, our union is amazing, and we’ll put a plan together. I’m excited to learn more about where we are, but it’s getting close. I think everyone needs to have that in the back of their head.”

The proposal also suggests cutting the preseason in half to two games while adding a regular-season contest, but Karras has a good perspective to consider as a sixth-round pick.

“I wouldn’t have a career in the NFL if I didn’t play in four big games. You have to think about the core of our union. The core is guys in years three through six, and four preseason games seems kind of pretty cumbersome. But I think even for me, this year was the first time I got a preseason game off. Heading into this year, those preseason games were my entire resume for the year. I ended up starting two games a year, and those games are big for me to have on film.”

The Pats center now has 16 starts from this past season to show teams when free agency opens.